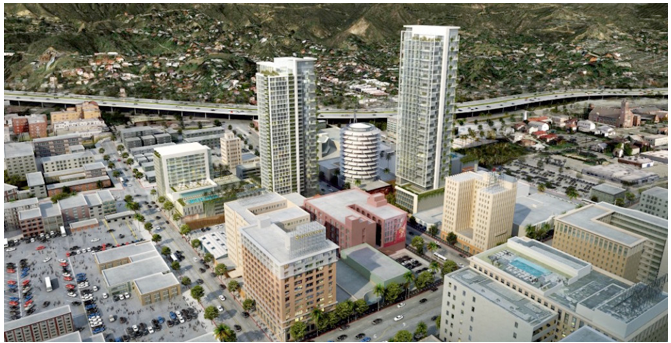 VOX POP--One of San Francisco’s most iconic luxury housing skyscrapers is sinking and tilting — and it was built by Millennium Partners, the same developer that wants to put up an ultra-controversial mega-project in Hollywood near the landmark Capitol Records building and an earthquake fault.

The Millennium Tower in San Francisco is home to such wealthy folks as former San Francisco 49er quarterback Joe Montana and San Francisco Giants outfielder Hunter Pence, but the 58-story skyscraper, the San Francisco Chronicle reported, has sunk 16 inches and tilted two inches since 2008. That’s a big deal, according to experts, and at least one major lawsuit has been filed — check out the complaint.

The Transbay Joint Powers Authority in San Francisco has also weighed in with a scathing press release. Here’s an excerpt:

The 60-story Millennium Tower is made of concrete rather than steel, resulting in a very heavy building. This heavy structure rests on layers of soft, compressible soil. The foundation of the Tower, however, consists only of a concrete slab supported by short piles that fail to reach the bedrock below. That foundation is inadequate to prevent settlement of a building with the weight of the Tower.

In Los Angeles, the City Council and Mayor Eric Garcetti have been strong backers of the Millennium Hollywood mega-project, which features two luxury housing skyscrapers next to the Capitol Records building — Millennium Partners is also behind that. The city of LA has even battled the state of California over the mega-project, which the state says is located near an active earthquake fault.

It’s the kind of political support a developer gets when working LA’s broken and rigged planning and land-use system — Millennium Partners has spent $5.2 million on high-priced lobbyists to win over over city politicians and bureaucrats, according to the LA Ethics Commission. 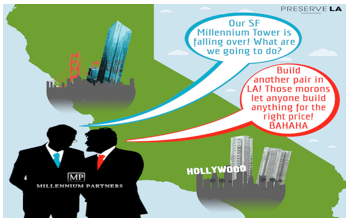 Now one has to wonder if that City Hall backing will result with LA getting not just one sinking and tilting skyscraper but two!

That’s how things work in LA’s broken planning and land-use system. Shell out big cash in campaign contributions and lobbying fees to win over city politicians and bureaucrats, and then expect very profitable favors in return. Since 2000, the real estate industry has contributed at least $6 million to the campaign war chests of LA politicians.

Enough is enough. We need to reform LA’s broken planning and land-use system, which is what the Neighborhood Integrity Initiative will do.

Join our citywide, grassroots movement by clicking here right now to donate any amount you wish.  You can also send us an email at neighborhoodintegrity@gmail.com for more information.

(Patrick Range McDonald writes for the Coalition to Preserve LA where this piece was first posted.)