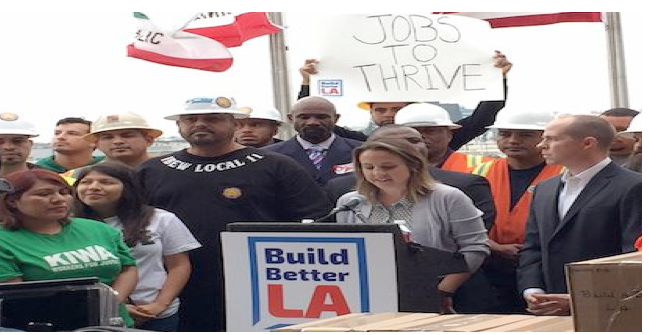 HERE’S WHAT I KNOW--Affordable housing is a big issue in LA. November’s jam-packed ballot will include an affordable housing measure, Build Better LA, backed by labor unions and community groups. If passed, the measure would place affordable housing requirements on developers who seek approval for projects larger than city rules allow.

The measure is opposed by business groups like the Los Angeles Chamber of Commerce who believe the proposal would impede needed development, increasing construction costs, especially vis a vis requirements that would favor union labor.

A surprising new group is rallying against the measure, tenant activists. The LA Tenants Union argues that the restrictions placed by Build Better LA would encourage construction of luxury housing instead of affordable apartments. Should the measure pass, activists fear renters would face eviction from buildings that would be demolished to pave the way for new construction.

Per an analysis by City Atty. Mike Feuer, some developments seeking zoning changes or amendments to the city general plan could either build affordable housing or pay a fee to bypass the requirement.

Certain projects would be required to follow wage and hiring guidelines and the city would be limited in its ability to restrict general plan amendments. The general plan is a blueprint to ensure development meets certain guidelines for affordable housing, access to public transportation, and labor.

If existing affordable housing is razed to make room for costly developments, tenants would not have a guaranteed right to return, according to the Tenants Union, a right that only exists now under certain circumstances. Several renters groups support the measure.

A second measure, which bakers hope to get on the March ballot, the Neighborhood Integrity Initiative, would limit spot zoning to bypass planning rules for individual development projects.

As developers continue the race to build luxury and mixed use projects to gentrify neighborhoods, the affordable housing crisis will not be abated. We need affordable housing close to public transportation and employment for our city to survive and thrive.

Forcing Angelenos further from centers of employment isn’t prudent for the economics of the city or for the environment. We need limits to development to serve both Angelenos and the business community, which also benefits from workers who can live closer to jobs. We need to ensure city office holders adhere to the city’s general plan instead of making decisions to favor the deep pockets of developers who will choose to pay a “fee” to bypass affordable housing requirements.