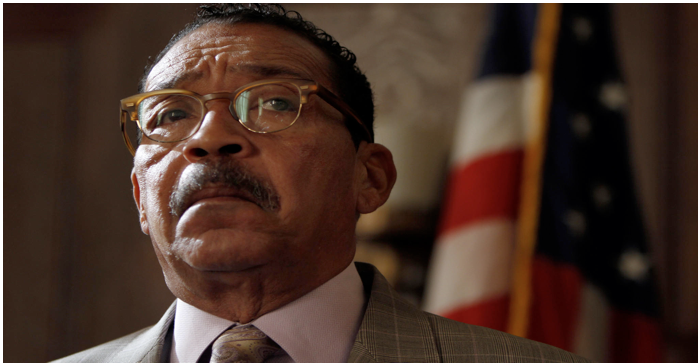 DOWNTOWN LOS ANGELES-In what can simply be described as “an eye-opening reminder of American history,” any modern-day behaviors that resemble the hateful acts of the Ku Klux Klan create more controversy than a group of Black Lives Matters protesters at a Donald Trump campaign event in 2016.

Only days ago, LA City Council President Herb Wesson was troubled by one of the many speaker cards he receives for public comment. A speaker card with racially-charged drawings on it stood out from the rest that usually only have identifying information for each speaker and the governing body they wish to address. But this time, a speaker card with drawings of a Klan hat with arms and legs holding a noose in one hand and, in the other hand, a picket sign with the words “Herb = N*gger” along with a primitive drawing of a man being lynched from a tree was on the front. On the back were the large words “F*ck Herb”-- obviously directing all this negative energy directly at the Council President and no one else.

Do you plan to vote in this important California Primary on June 7?

The lone wolf in this matter is a City Hall regular who self-identifies “Wayne from Encino” (I can’t help but wonder how the community of Encino feels about its newfound attention.)

As an outspoken activist who also frequents City Hall to address many Skid Row issues, including homelessness, I have come to recognize “Wayne from Encino” by face and demeanor. Almost every time he speaks during public comment (hiding behind freedom of speech protections,) he delivers a constant onslaught of vulgarity wearing his usual “uniform”-- dingy tan khakis and an equally dingy stripped t-shirt. Combined with his verbal undertone, he has always pointed out his displeasures about how the poor and homeless are treated in Los Angeles. I thought he himself may have been homeless or formerly was.

To hear reports of him being described as “an attorney” following his arrest was shocking, to say the least. My immediate thought was, “If he’s an attorney and is always at City Hall commenting during various public comments in City Council and council committee meetings, when does he practice law and how many clients does he have?”

Once the “speaker card-gate” situation had become public, all eyes were lasered on Wesson. How he responded would set the tone for everyone else. Would he be angered to the point where suddenly Black Lives Matter, the NAACP and others would swarm City Hall to take over any and all public meetings with loud, continuous dominating outbursts that would drown out all civic discourse? Would Jesse Jackson, Al Sharpton or other prominent Black leaders and clergy hold press conferences demanding “action”? While some may think this would be unnecessary acts of disruption, in this case, it all would be warranted!

History has shown that when tensions are high and the potential for a sudden “release of bottled up energy” by the masses is present, those who exhibit natural acts of class are recognized for such. This is unlike former President George W. Bush who was ridiculed for his quirky demeanor immediately following news of planes flying into New York’s World Trade Towers during the tragic September 9/11 event.

In this case, Herb Wesson should be publicly recognized for his uber-classy demeanor. Of course, he publicly blasted “Wayne from Encino” during a no-nonsense press conference that had to be done, but he didn’t take the City of Los Angeles down such a negative path that the entire city would come to a screeching halt. This is something that should be duly noted by Mayor Garcetti and the other City Council members -- whether they do it publicly or privately is up to them, but it should be done!

Then, as other City business needs to be handled, Wesson respectfully returned his focus to his duty as a public servant and council president…. SMOOTH!

An already scheduled City Council town hall-style meeting in South LA (in Wesson’s district) happened only days after this racial madness at City Hall. Wesson conducted business as usual. Instead of using the platform to spew hatred towards the Klan (or “Wayne”), which would have probably resonated with the majority African-American audience, he stayed on-agenda, including the controversial DWP rate hike possibility.

The only mention Wesson made to the “other” issue was a simple joke about hoping not to receive any speaker cards with drawings on them. This generated resounding laughter from the hundreds of attendees.

At the end of the meeting, however, Wesson did receive one speaker card with a drawing on it. It was a heart with the caption: “We got luv 4 you, Herb!”

A fitting end and transition to what could have been an uncomfortable and distracting spectacle for the entire City of Los Angeles.

It’s moments such as these that reinforce my love for my city, knowing that with class we can voice our displeasures, debate the issues and reach compromises in the best interest of the greater good, all in the same demeanor.

Thank you, Herb Wesson, for showing us how it’s done! You’re a true leader…leading by example.

And to those who don’t agree with me, just say something negative out loud about any of this and watch the city “turn up”!

You have been warned! Show some respect….Or hate with class. Whichever choice you make, just know that Wesson has given us all an example to follow.

(General Jeff is a homelessness activist and leader in Downtown Los Angeles. Jeff’s views are his own. ) Edited for CityWatch by Linda Abrams.