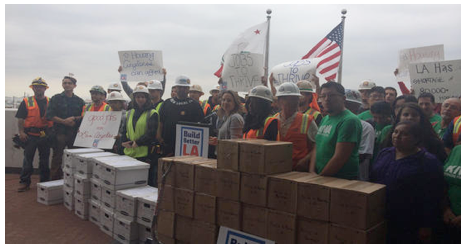 DEEGAN ON LA-The critical mass of frustration, distrust, a general unease about how zoning works, along with some successful lawsuits against building projects, has put “zoning” in the spotlight. Concern about fixing our broken city zoning process is what’s driving two ballot initiatives that may go before the voters in November and March.

We’ve got to end what Gail Goldberg, Executive Director of the Urban Land Institute and a longtime city planner in San Diego and Los Angeles, identifies as “the developer’s mantra,” recited whenever a developer goes to the city planning department: “The councilperson loves my project.” Goldberg adds, “…which is code for it’s going to get adopted, so don’t bother.”

Two ballot measures may change this. In November, voters will be given a chance to vote for Build Better LA’s loophole allowing “hardship” cases to get zoning variances. In March, voters can weigh in on the Neighborhood Integrity Initiative – a measure to put a moratorium on variances. Whichever ballot measure gets the most votes will be the ultimate winner.

But first, each measure must qualify for the November and March ballots by amassing 65,000 registered voter signatures. Build Better LA, backed by a coalition of labor and housing advocates, just announced they have gathered over 100,000 signatures; they presented their package to the City Clerk on Monday, May 15 for verification in order to qualify for the November 7 ballot. The Neighborhood Integrity Initiative, led by the Coalition to Preserve LA, is still gathering signatures, but has still has some time before their filing deadline in November for the March 7, 2017 ballot.

These two initiatives offer different slants on the cause of and proposed remedies to recognized zoning issues.

The Build Better LA ballot initiative ensures that more people will have access to high-wage construction jobs and to housing that's affordable, according to Rusty Hicks, the Executive Secretary-Treasurer of the Los Angeles County Federation of Labor and convener of Build Better LA.

Zoning variances would be allowed on a case-by-case basis following a “hardship” appeal to the relevant Councilmember. If a developer gets a variance, they can either include affordable housing on the project’s site or provide it off site. A developer can also choose to write a check to the city’s Affordable Housing Trust Fund.

Said Hicks, "On behalf of the Build Better LA Coalition, we are grateful to the nearly 100,000 Angelenos who signed and have faith that our City can do better. The voters in Los Angeles will soon not only get the opportunity to vote on the future of our country, but they will vote on an initiative that brings housing people can actually afford and good, local jobs they could rely on.”

The “guts” of the Neighborhood Integrity Initiative, scheduled for the March election, says Coalition to Preserve LA campaign director Jill Stewart, “is to force them (city council) to update the General Plan. One of the elements that is now fifty years old is infrastructure, and police and fire services that is 60 years old. We need to link these and the housing element together with growth, in the General Plan.”

Stewart added that the “the moratorium (on variances to the General Plan zoning rules now in effect) is a wake up slap in the face. It will only affect 3-5% of projects in LA.”

The “moratorium” on variances sought by the Neighborhood Integrity Initiative has been widely attacked as a halt to all building. That is both untrue and a sign of how desperate opponents are to derail the Neighborhood Integrity Initiative. There are thousands of projects in development that will not be affected because they are “by right,” or otherwise meet zoning requirements without requiring a variance.

That’s thousands of projects in the pipeline that the labor federation can hopefully fill with their union construction crews to help meet their goal of better paying local jobs for their members. Even if Build Better LA is not passed by the voters in November, they stand to make considerable gains in employment from the building boom underway as the city densifies. Their risk in losing the measure is not jobs – it’s that developers might be unable to plead “hardship” to their councilmembers to get zoning exemptions or variances.

Controlling exemptions and zoning variances is at the heart of both measures. Build Better LA has a mechanism for obtaining variances if the developer can successfully plead his case to his councilmember that not to have an exemption would cause a “hardship.” The Neighborhood Integrity Initiative says that the 3-5% of projects that are currently out of zoning compliance must be put on hold -- the demonized “moratorium” -- until the General Plan is updated.

It’s up to the electorate in November and March to understand the stakes. The wild card here is that the Mayor may induce the City Council to resolve the issues in order to pre-empt the ballot box. While they can do that, it could end up being wildly unpopular to remove the public’s voice from such a sensitive issue -- especially coming from the developer-centric Mayor and, with the exception of David Ryu, the developer-dependent city councilmembers. Politically, the Mayor and half the City Council (odd-numbered districts) are up for re-election in March 2017. They will need to face the voters on many development issues.

Another important voice in the debate is Michael Weinstein, the AIDS Healthcare Foundation leader, who is marking his 50th year as an advocate, dating back to the anti-war protests in the Vietnam era. He is the initial backer of the Neighborhood Integrity Initiative.

His take on Build Better LA is that “The Neighborhood Integrity Initiative supports union labor on projects; it’s not against the drive to get more union representation on job sites, but the problem with their initiative is that it essentially says that if the council decides there is a hardship, they can override the requirements of affordable housing. Such a huge loophole undermines the effort to control exemptions.”

Weinstein continues, “What’s happening now that’s great in the city is that the Neighborhood Integrity Initiative could really help to empower different voices across the city. I see that happening. Individual communities get discouraged until there is strength in numbers.

“In this campaign there is a consensus that the current system is broken. The Mayor has said so, the LA Times has editorialized. Those are steps in the right direction. It’s unfortunate that the Mayor and City Council put forward the skimpiest of fig leafs for reform of the current system. I’m not impressed at all with that very faint attempt to remedy a problem that we’ve identified. People will not ultimately be fooled by that.

“The bottom line is that we have recast the issue of development and spot zoning (variances) over the last six months in a way that has a profound impact on dialogue around these issues,” Weinstein emphasized.

On April 27, UCLA's Ziman Center and the Urban Land Institute sponsored a conference during which several representatives (including Stewart and Hicks) spent 90 minutes in a thoughtful and revealing panel discussion about planning in Los Angeles.

Panelist Zev Yaroslovsky, a former County Supervisor and City Councilmember with decades of experience dealing with land use and development, who is now Director of LA Initiative at UCLA’s Luskin School of Public Affairs, has not announced a formal position for or against either ballot initiative. However, he did go as far as to say during the panel that the Build Better LA ballot proposition will “weaken zoning laws.”

Several days later another politico, CM David Ryu (CD4), led the rollback of a development project in his district by saying, “We must work to restore trust in government…what we have before us is the kind of action and the reason why the Neighborhood Integrity Initiative is looming over our head. Lack of trust. Lack of transparency.”

Between now and November when the Build Better LA measure should be on the November 7 ballot, and then between November and March 7 when the Neighborhood Integrity Initiative should appear on the March ballot, there will be many other voices in the conversation. This will be a great start to fixing the planning process and clarifying what we want Los Angeles to be. Do we want to continue our tropical suburban feel or continue on a growth trajectory toward becoming a more urban metropolis? We must decide how we are going to get to either destination.