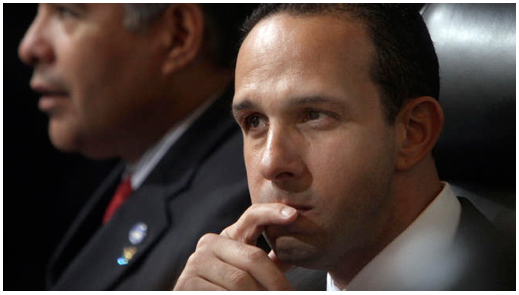 LA COUNTY POLITICS-Opponents of Mitchell Englander (photo above) in the upcoming Fifth District County Supervisor race might want to consider what happened to the last field of candidates who ran against him in 2011. To date, twenty-five percent of those challengers have been prosecuted -- and collectively fined $55,000 -- in Ethics Commission actions presided over by an Englander campaign donor -- namely, Nathan J. Hochman, current member and one time President of the Commission.

Hochman pitched in $500 to Mr. Englander’s campaign committee in October 2015, during the brief 15-month interval between signing the action against one-time Englander challenger Navral Singh on December 16, 2014 and serving as the hearing officer in the trial against the equally unfortunate Englander challenger Kelley M. Lord -- whose case had the double misfortune of also having Englander-appointee Serena Oberstein on the Commission

The headline charges against Mr. Singh, according to the Ethics Commission press release, were failing to submit copies of campaign communications and failing to include proper disclaimer language on campaign communications. Mr. Lord’s chief “crime” was accepting a campaign contribution in excess of the $500 per-person limit -- a preposterous charge given that the work was done without Mr. Lord’s permission, by a guy who basically stole money from the Neighborhood Council on which Mr. Lord served, and continues to serve, as an elected member.

Both enforcement actions ought to be reversed and Mr. Hochman should offer a written explanation of his actions. The conflict of interest policy for members of the Ethics Commission should be explained to include clear directives regarding the need for recusal from enforcement actions.

(Eric Preven is a CityWatch contributor and a Studio City based writer-producer and public advocate for better transparency in local government. He was a candidate in the 2015 election for Los Angeles City Council, 2nd District. Joshua Preven is a teacher who lives in Los Angeles. Views expressed here are those of the authors and do not necessarily reflect the views of CityWatch.) Photo: LA Daily News. Prepped for CityWatch by Linda Abrams.