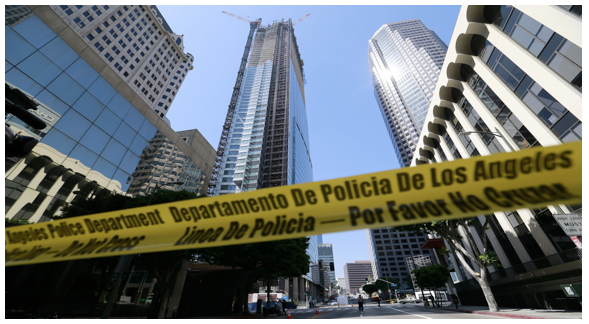 FIRST PERSON--I have been working at the Wilshire Grand Center construction project for a year and a half as a filmmaker trying to capture the daily effort and skill that goes into building our city’s tallest structure. I have approached this three-year project with respect – like one who surfs big waves or climbs our highest mountains – aware of the dangers and humbled by the power and vastness of the environment. I’ve seen many construction workers make the sign of the cross as they arrive in the morning – a gesture of faith and an appeal for safety and guidance. At safety meetings every morning, they are reminded that the main goal is to go home to their families and friends at the end of the day.

Yesterday, one of those workers – an electrician – fell to his death from the 53rd floor. The state’s occupational safety agency, Cal/OSHA, has yet to determine the incident’s cause. Having walked on that floor – and every other floor up to the top of the 73-story building – I know that every effort is made to keep workers safe. A strict rule stipulates that anyone who is working near the “leading edge” of the building must be tied off with a safety harness that will prevent any fall. I’ve been reminded many times by the ubiquitous safety inspectors to stay away from the edge of the building, orders that I gladly follow.

When I heard about the young electrician’s death, I was at the hall of the union he belonged to. Members and officials there were stunned, thinking about who he was – trying to find out what happened – and expressing concern for his family.

I thought of the many workers who I have interviewed at the Wilshire Grand – from every craft, from every part of town, from amazingly diverse backgrounds. I have often visited their homes to fill out their stories, to put together a deeper narrative of how and why they came to their craft – how life and personal choices moved them in a particular direction.

I called a number of Wilshire Grand workers that I have become friends with to ask what happened – to share concern. They are individuals who have consistently talked about the difficulties of their work and the solidarity they feel for their “brothers and sisters” who work beside them every day. They know that in this dangerous workplace, their lives are dependent upon the good judgment, the watchfulness and the actual love of their workmates.

Sefi Edery, an ironworker, has described himself and his fellow union members as “warriors,” set apart and elite in their own way. How many of us, after all, could get up at 5 a.m. to work hundreds of feet in the air carrying iron bars all day, smoothing cement or pulling wire through ridged conduits? Sefi added that if somebody falls, there is always someone there to help them up.

What the dozens of Wilshire Grand workers I have talked to ultimately understand is that all of them – all of us – are vulnerable and dependent beings. As such, we need moral vocabularies and behaviors that acknowledge and sustain that insight.

The Wilshire Grand site is now temporarily closed out of respect for the man who died. Proud of the excellent safety record that had been achieved there thus far, these deeply saddened workers are now reflecting on the atmosphere that awaits them when they return to their jobs. They will complete this project – as they always do. And they will continue to watch out for each other – looking for the obstacle that their partner doesn’t see, picking up a load that their “brother” or “sister” can’t carry – and knowing that those they have helped will in turn watch out for them.

(Kelly Candaele is a Los Angeles writer whose essays have appeared in the New York Times and the Los Angeles Times. He is directing and producing a documentary film on the building of the Wilshire Grand complex. This piece originally appeared at Capital and Main.)  Prepped for CityWatch by Linda Abrams.