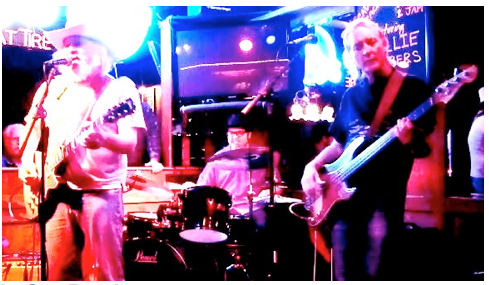 TRANSIT TALK-What do Fig Jam, (event photo above) the so-called Neighborhood Integrity Initiative and Janette Sadik Khan’s new book Streetfight have to do with one another? More than you might imagine.

Los Angeles is of course a city of competing ideals. And perhaps we’re better for it. How dull life here would be if there was no tension, no civil civic dialogue about urban life in this massive caldron of cultures and lifestyles.

For all its laid back southern California vibe, Los Angeles is also the home of sharply competing visions of the Promised Land.

Those differing ideals were very much on display Friday at a panel discussion on the Neighborhood Integrity Initiative at the Westside Urban Forum (WUF).

Sure, it’s hard to listen without going apoplectic as someone who supports the no-growth Neighborhood Integrity Initiative makes a case for this misguided ballot measure by citing an unsupportable anecdote that his friends are the only residents of the high-end condo at Western and Wilshire who ride the Purple Line subway. Yes, that’s what the panelist, an adjunct instructor at the USC Price School of Public Policy no less, actually said to the dumbfounded crowd.

Fortunately, there were more intellectually honest experts on the panel including Mark Vallianatos of the Urban and Environmental Policy Institute at Occidental College, Alan Bell, a former Deputy Director of the LA Planning Department and moderator Con Howe of Cityview Los Angeles Fund. For years the Westside Urban Forum has provided a much needed service by bringing important land use topics like the NII to the fore.

What does Janette Sadik-Khan’s book (written with co-author Seth Solomonow) have to do with all of this? Based on Sadik-Khan’s critical work focusing on making cities more pedestrian and bike friendly, the book is very much a playbook for the future of growing cities like Los Angeles. Take the chapter entitled, Density is Destiny, in which the authors explain how “cities’ geographic compactness, population density, and orientation toward walking and public transportation make them the most efficient places to live in the world.” As LA and other cities grow and become more urban, the work of Sadik-Khan and like-minded urbanists are helping ensure that our growth is sensible – featuring amenities like public plazas, protected bike lanes, bus rapid transit and streets that are safer for pedestrians and drivers alike.

And Fig Jam, the street happening on North Figueroa in Highland Park? The free one day event featured a temporary bike lane and a parklet designed to improve the street by drawing attention to the area’s rich past, demonstrating what will be when the bike lane and parklet are made permanent.

Delicious. But also an illustration of Sadik-Khan’s and a growing chorus of smart local urban planners’ and advocates’ vision in action. Fig Jam was the work of the Los Angeles Department of Transportation (LADOT), L.A. Great Streets LA, the Los Angeles County Bicycle Coalition (LACBC), Los Angeles Walks and other local partners.

Street by street, we are building a city whose thoroughfares are safer, greener and more pleasant for the growing numbers who choose to live here. Think Vision Zero, LA’s road safety policy that promotes smart behaviors and roadway design that anticipates mistakes so that collisions do not result in severe injury or death. Other U.S. cities that have adopted this eminently sensible goal include New York, San Francisco, Seattle, Portland, Chicago, San Jose and San Diego.

It’s a movement. And it’s why LA has embraced smart density with public plazas, pedestrian and bike amenities along transit and put the single driver car, the freeway and sprawl in the rear view mirror. Or, as Hilary Norton of Fixing Angelenos Stuck in Traffic (FAST) put it in her question to the panel at WUF, the timing of the Neighborhood Integrity Initiative seems particularly poor -- coming at a time when we are enhancing our ability to build sensible transit-oriented communities with the construction of new rail lines that can efficiently move lots of people.

Respect. Sensible urban growth built with public plazas, pedestrian and bike amenities along transit corridors is something we should all unite behind.

What else? Please go to the polls and vote against the Neighborhood Integrity Initiative next March. And let’s make safe streets and transit-oriented density our destiny.

(Joel Epstein is a senior advisor to companies, law firms, foundations and public initiatives on communications strategy, corporate social responsibility (CSR), recruiting and outreach. He is a contributor to CityWatch and can be contacted at [email protected].)  Edited for CityWatch by Linda Abrams.