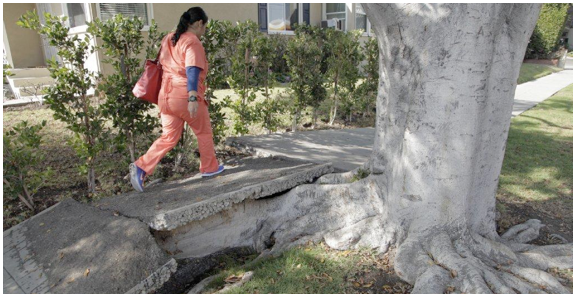 ANOTHER PERSPECTIVE--At a joint meeting this week, the LA City Council’s public works and budget committees approved the outlines of how Los Angeles will spend $1.4 billion to repair its damaged sidewalks.

The sidewalk repair funding is due to the city settling Willits v. City of Los Angeles, a class action lawsuit over L.A.’s failure to make the public pedestrian right-of-way accessible to disabled people. The $1.4 billion will be spent over ten years.

The plan still needs the approval of the full city council, but with nine of fifteen councilmembers on committees already approving, that should be a formality.

The plan approved yesterday is essentially the “fix-and-release” plan proposed in 2015, with a series of 23 amendments outlined in a February 2016 letter by councilmembers Paul Krekorian, Joe Buscaino, Mike Bonin, and Nury Martinez. The Los Angeles Times and NBC4 reported on the specifics of yesterday’s approval.

Though a lot of the fine grain details are yet to be worked out, there is a lot to like about the newly approved sidewalk repair plan. But there are also some worrisome aspects to it.

And the bad news:

Like many progressive LA city plans, the initial approval may be less contentious than the implementation still to come.

(Joe Linton is the editor of StreetsblogLA. He founded the LA River Ride, co-founded the Los Angeles County Bicycle Coalition, worked in key early leadership roles at CicLAvia and C.I.C.L.E., served on the board of directors of Friends of the LA River, Southern California Streets Initiative, and LA Eco-Village.) Prepped for CityWatch by Linda Abrams.