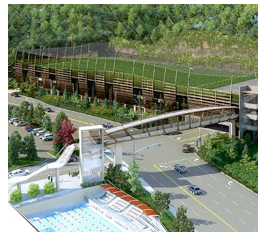 DEVELOPMENT POLITICS-Politics is local but Los Angelenos are sick and tired of seeing local interests steamrolled by downtown powerbrokers willing to do whatever it takes to achieve City Hall cooperation.

One such controversy has stoked deep-seated resentment in Coldwater Canyon where residents who would very much like to be settling in for a cozy El Niño are instead bracing themselves for a battle against a new private parking garage, athletic field and pedestrian bridge over a major public thoroughfare in Studio City.

Speaking about Harvard-Westlake School’s request to have the three-story 750-car lot and bridge over Coldwater Canyon Boulevard, school Vice President John Amato said, “Our kids have to perform in front of audiences so we have to have parking for visitors, and we want to have all our parking in one location.”

In LA city politics, the closest thing to absolute power is the ability of a city councilmember to make or break a land-use project in his or her district. Two days after telling his constituents who live in the area 24-hours a day that the school's bridge over Coldwater was a "challenging issue for the community," District 2 Councilmember Paul Krekorian received (most on the same day) donations from eighteen Harvard-WestlakeTrustees, with all but two giving the maximum $700 contribution and none disclosing their relationship to the school on the donation form.

This activity resulted in a $20,950 windfall for Mr. Krekorian's campaign committee from the school's trustees alone. All but a few of those contributions were made on November 3, 2014 and though we saw references to "homemaker," "investor" and "stamp collector," not one of the contributors identified his or her role as a school trustee. This tops the virtually simultaneous contributions made to Mr. Krekorian by the same trustees and administrators on February 18, 2011, also with not a single trustee identifying his or her connection to the school.

There is no more effective way for a 501c3 non-profit to lose its tax-exempt status than by contributing to a political campaign, so writing a check from Harvard-Westlake School is something only a fool would entertain. But having that many trustees make donations on a single day violates the spirit, and possibly the letter of the federal law that prohibits 501c3s from engaging in political activity.

Incredibly, Mr. Krekorian did not return any of those contributions. On the contrary, he used them to obtain public matching funds from the City, so that each Harvard-Westlake contribution was in effect supplemented by $500 of taxpayer funds. In other words, literally the very same people who are having their quality of life at their homes intruded upon by the school's plan were made to match the Harvard-Westlake influence-peddling donations.

Article II of the City of Los Angeles Code of Ethics states that persons in public service "shall not give occasion for distrust of their impartiality or of their devotion to the city's best interests."  How could Mr. Krekorian affirmatively state that he is impartial while taking so much money from a highly interested part y...  or in this case, parties?

The answer, shamefully, is the public was never supposed to connect the dots and figure it out.

Obviously taking large donations and submitting them to the matching fund compromises impartiality. But it does more than that. It also erodes basic trust and the public's faith in our politicians. The Ethics Commission, the very office which approved the dispensing of the public matching money should take responsibility to rectify the unacceptable status quo. A good start would be to close the loophole that allows for this type of stealth donation. Trustees with business before the city should be required to disclose that relationship. If the hard ban on political activity for 501c3s makes that impossible, the loophole will be effectively closed. Next item...

Councilmember Krekorian should do now what he should have done a year ago -- return the eighteen contributions he received from Harvard-Westlake Trustees. Of equal importance, he should return all of the matching funds he obtained through use of the Harvard-Westlake money. Harvard-Westlake ought to amend its 990 tax filings appropriately, checking the correct (and honest) box that indicates that they have indeed been engaged in lobbying -- nearly a million dollars in lobbying for what has become...a bridge too far.

The smart people, and there are many at Harvard-Westlake, ought to realize that a parking structure on the campus side of the public roadway would be just fine. Any digging in the hillside in question will merely be digging a hole for the school's reputation.