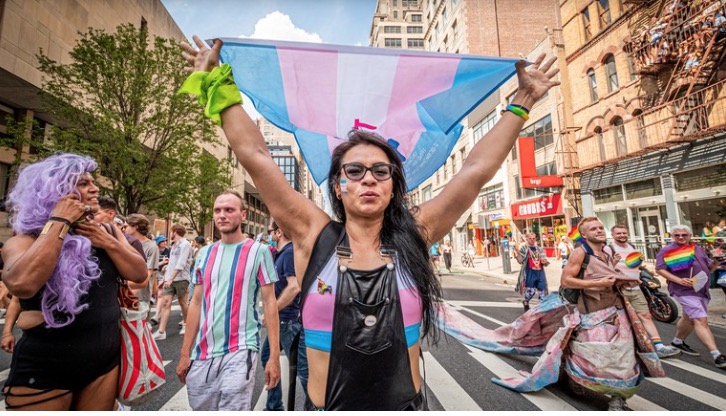 LGBTQ - Like 4.5 million other TikTok users, I've recently become enamored with Dylan Mulvaney, a spritely Los Angeles-based performer who came out earlier this year as a transgender woman.

In her "Days of Girlhood" video series, Dylan charts her own gender exploration with some typical milestones—getting her nails done, trying new makeup styles—and some less typical ones—talking hair with Jonathan Van Ness, appearing in ads for Kate Spade. What makes Dylan such a joy to watch, however, is her joy. With unbridled and endless optimism, she seems to have a permanent smile, an endless wardrobe of pastels, and a sense that anything is possible.

Trans joy, in particular, can be revolutionary in and of itself.

Switching from her videos to the latest headlines about trans rights can feel like switching between alternate universes. How, after all, can any trans person greet the world with so much energy and aplomb while lawmakers enact increasingly-cruel attacks on trans rights? From worsening rates of mental health crises among trans youth to violent attacks against trans women of color to the emboldened attitude of anti-trans extremists, Dylan's bright demeanor can feel impossible for the rest of us to replicate.

But it's precisely the joy she musters that each of us need to fight back. There is a stark difference between naive optimism and conscious, purposeful joy. A blind trust that everything will turn out fine is a deadening stance for any movement to take—particularly the fight for transgender equality, whose gains are recent, shallow, and fragile. But so, too, does cynicism and pessimism kill motivation to action. Neither progress nor defeat is inevitable, and buying into either myth can mute the motivation needed to fight for real, lasting change.

Trans joy, in particular, can be revolutionary in and of itself. Before and after leaving the closet, many trans people are surrounded by alarms about the dangers we may face—some real, some imagined, and some more telling about cisgender people's anxieties than they are of actual risks we face. Countless headlines about violence, suicide, and discrimination combine with the false narratives of anti-trans activists to suggest our lives outside the closet will be little more than misery, subjugation, and regret.

Even when grounded in a desire to address the material harms transgender people face, however, these one-sided narratives about the trans experience can end up reinforcing a status quo which is hostile to our existence. By transgressing or breaking the gendered boxes so much of our society treats as sacrosanct, the misery of trans people can feel like a fable about the ills that befall people who question gender norms and expectations. This mythology is then weaponized against our progress, suggesting it is too costly, too difficult, or altogether impossible.

But the suffering of transgender people is a policy choice disguised as an inevitability. This is why our joy—your joy —is so indispensable as a fuel for action. Particularly when the news of the world only seems to grow dimmer and darker, it's more critical than ever to prove transgender joy is a reality within our grasp. To prove that with the right material and social support, our lives can be as fulfilling and meaningful as anyone else's. That even when forces larger than us try to break our spirit, we can respond as forcefully and effectively with joy as we can with anger, defiance, and protest.

This is hardly a lesson many transgender people need to learn. Even amid an unparalleled assault on our rights, the number of trans people comfortable enough to live openly continues to grow. The future of transgender rights is absolutely uncertain—we must be clear-eyed about the many growing threats we face to our safety, dignity, and liberty. But within uncertainty is also a chance for hope. Like Dylan's vibrant appeal to optimism and celebration, darkness is an opportunity for your own light to shine brighter.

(Gillian Branstetter is a Communications Strategist at the ACLU’s Women’s Rights Project and LGBTQ & HIV Project. Formerly of the National Women’s Law Center and the National Center for Transgender Equality, she works with advocates, storytellers, reporters, and artists to fight for gender justice, including the safety and dignity of queer and transgender people. This article was published in Common Dreams.)