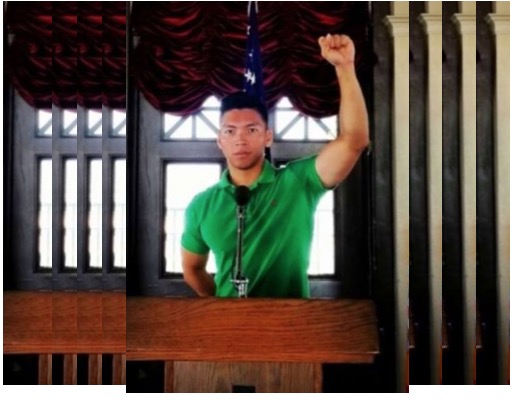 DEEGAN ON LA— Much has been made about the leftward tilt in Los Angeles politics that now runs the scale from centrist to moderate to progressive to radical.

Even further left than radical is Kenneth Mejia, who styles himself as a poster child for the revolution that he hopes will happen.

Mejia is a showoff for how out of whack politics has become, and he revels in his role that has him dreaming of revolutionary domination. He’s running for City Controller against Paul Koretz.

CityWatch spoke to Paul Koretz (CD-5) about his opponent, and he immediately raised a red flag when he said that “Kenneth Mejia is the most dangerous and extreme candidate to ever run for office in Los Angeles. He’s immature, egotistical and very dangerous. He would add a tremendous amount of chaos to the Controller’s office and to the entire City”.

A frequent chant and hashtag of the radical left is to defund the police. Koretz points out that “Mejia is a strong supporter of eliminating law enforcement in LA, and the huge LAPD cut proposed in the “People’s Budget”. Mejia has said “Not a fan of police. That is the one thing stopping many revolutionary uprisings in America.”

However, he does like some police, such as police-state authority figure Bashar al-Assad, the Syrian leader whom he “defended against charges that he gassed his own people”.

Mejia’s pro-Syrian and Palestinian positions, and anti-Israel stance, are worth knowing about because they help to inform his revolutionary rhetoric.

Koretz looked deeper into what could be an anti-Semitic worldview of Mejia, pointing out that ”He opposes Israel and strongly supports the anti-Israel BDS  (Boycott, Divestment, Sanctions) movement.” It works to end international support for Israel's oppression of Palestinians and pressure Israel to comply with international law.

Mejia has said “I stand with Palestine” and “We must stand up to Israel, and has also claimed that Israel was about to dismember 2,700 Palestinian prisoners in a highly anti-Semitic trope not claimed by anyone else.” This insight by Koretz is not part of Mejia’s scrubbed campaign materials.

Personalizing and localizing his anti-Israel stance, its been reported that “Mejia has a paid staffer who went to a synagogue, disrupted an event and shouted obscenities.”

Disrupting a house of worship is not Mejia’s only target for spontaneous demonstrations. He recently helped lead two City Council chamber takeovers while Koretz and his colleagues were debating an issue. Koretz gives this first-hand account of the chaos created by Mejia: “This is a guy who is rather frightening--he thinks he can make his point by his supporters chanting to prevent Councilmembers from being heard in debate, climbing over barriers to attack Councilmembers, and forcing the Council President to suspend these sessions until order was returned by clearing the Chambers.”

He has no mainstream political allies. None of the last four City Controllers have endorsed Mejia; they know what it takes to get the job done. Former Los Angeles City Controller Laura Chick accused Mejia of being an extremist who is “unfit for public office.”   She also called called him “erratic”.

The former Controller’s disapproval of him, and their support of Paul Koretz for the job, may help to sway voters, and be likely to help set an internal tone for the hundreds of staffers that worked for Laura Chick, Rick Tuttle, Wendy Greuel and the incumbent Ron Galperin who have all endorsed Paul Koretz for City Controller.

Nor does he have community level support where it counts. It is the mission of the Coalition of Council District 5 Homeowner Associations https://cd5hoas.org/ to “preserve and protect neighborhoods”. In this context, the Coalition published a review of “Disturbing comments made by Kenneth Mejia that included “calls for ‘defunding the police to the last penny’, and saying that ‘Joe Biden is a racist and a rapist’. Furthermore, Kenneth Mejia calls himself ‘a radical and a revolutionary’ who promotes rebellion and has promoted unrest by saying ‘rise up comrades.’

He also told his followers that “the police exist to uphold white supremacy”.

Would “defund the police” Mejia, as City Controller, create chaos and put public safety at risk by attempting to cut off paychecks to cops? Explains Koretz, “The worst part of his wanting to “defund” is that it’s unclear whether as Controller he could decide not to pay sworn LAPD officers, fire fighters or contractors. We have no way to know. If he tries to deny paychecks it will be up to the courts to decide.”

Mejia’s attempt to bluff the public that they are getting a licensed, experienced and professional CPA to run the city’s fiscal programs is stale. It's been years since he held that professional designation.

Considering what he touts as his sterling and enabling credential, that qualifies his ambition to be City Controller, Koretz points out that “Voters see "CPA" on the ballot and think he sounds like a benign accountant qualified for the Controller's position. They do not see who Mejia is behind the façade of the CPA title.”

They do not know that Mejia’s use of “CPA” is a window-dressing prop. Its alleged that he “claimed bogus CPA status and that his CPA license has lapsed” over the years, and that he just renewed it in January, when he filed to run in the Primary election. “According to the California Board of Accountancy, the state agency that oversees CPA licenses, Mejia’s license had expired or, for years, was listed as inactive; in fact, his license was listed as inactive until January 25, according to the board.”

The Asian Journal News narrows down his lapse of being an active CPA in their September 8, 2018 reporting, saying that Mejia had an "expired" or "inactive" CPA license.

From the end of his failed attempts to run for Congress in 2016-17-18 until just a few months ago, Mejia, who brags about being “the only CPA in the race” was not an actively licensed CPA at all for the past several years.

He last worked in “accounting” in 2016 when he left his job at Ernst and Young to run for office, and then to become a volunteer at a group that that provided food and hygiene items to low-income and homeless people in Los Angeles.

His attempt to become City Controller will be his fourth try at elected office. Looking back at his three Congressional campaigns, his platforms were mostly moderate in tone, including running on the Green Party ticket before he switched to Democratic.

His sharp turn to the ultra-hard radical left this time around may signify a genuine radicalization—that he thinks political progress can come only through a revolution by his comrades.

Or, it may be that he is just an opportunist in an unstable political climate who will say anything to get attention.