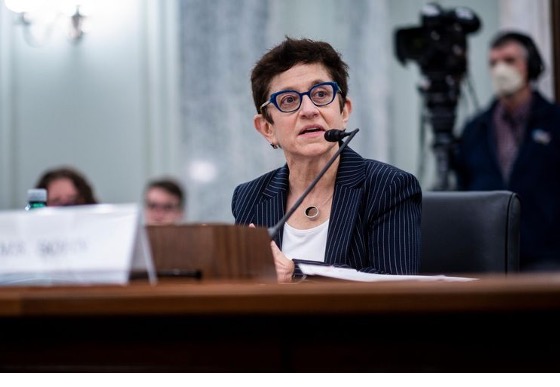 NET NEUTRALITY - Digital and consumer rights advocates on Wednesday called on the U.S. Senate to swiftly confirm longtime public advocate Gigi Sohn to the Federal Communications Commission after President Joe Biden announced her nomination for a second time, more than a year after the telecom industry launched a spending blitz to keep Sohn from joining the regulatory panel.

Biden first nominated the lawyer and longtime net neutrality defender in October 2021, but with a 50-50 deadlock in the Senate before the midterm elections and some corporate Democrats targeted by telecom lobbyists who pushed them to oppose Sohn, the president did not garner enough support for his nominee last year.

Following the elections of Sens. John Fetterman (D-Pa.) and Raphael Warnock (D-Ga.), Sohn could have a better chance of being confirmed this time around.

"The new Senate has a renewed mandate to serve the public interest. It can start by confirming Sohn immediately."

"After an unacceptable delay of over a year, the Senate must move swiftly to confirm Sohn so the FCC is empowered to prevent consumer abuses and work toward an open and affordable internet," said Maria Langholz, communications director for Demand Progress. "All eyes are on the Senate. It's time for the Senate to confirm Gigi Sohn, a public interest champion, and dismiss outright the bought-and-paid-for, false controversies spun up by the telecom industry and its lobbyists."

As Common Dreams reported in April, a nonprofit founded by former Sen. Heidi Heitkamp (D-N.D.) spent $250,000 on a social media campaign targeting Sens. Catherine Cortez-Masto (D-Nev.) and Mark Kelly (D-Ariz.), claiming Sohn was insufficiently committed to expanding rural broadband access. Two of Heitkamp's biggest donors when she was in office were AT&T and Comcast, which have fought against restoring net neutrality protections that were gutted by the FCC during the Trump administration.

With the FCC deadlocked, the panel has been unable to vote on the protections, which keep internet service providers from blocking or throttling service and offering paid "fast lanes" for certain websites.

The delay in confirming Sohn has "harmed millions, preventing the deadlocked agency from passing or strengthening crucial policies that would help people connect and communicate," said Craig Aaron, co-CEO of Free Press Action.

Contrary to the claims of Heitkamp's One Country Project and other telecom-aligned groups, said Aaron, as a commissioner Sohn will "ensure that the benefits of broadband reach everyone" as well as fighting "on behalf of working families trying to pay their rising monthly bills" and curbing "the runaway media consolidation that has decimated local journalism and harmed Black and Brown communities."

"Industry spent millions of dollars on astroturf groups to repeatedly misrepresent Sohn's record in the media and on Capitol Hill," added Aaron. "They've lied repeatedly about her record and principles—but their corrupt and dirty tricks aren't working anymore. The new Senate has a renewed mandate to serve the public interest. It can start by confirming Sohn immediately."

Evan Greer, director of digital rights group Fight for the Future, denounced the "smear campaign" that led to an "inexcusable" delay in Sohn's confirmation last year, helped in part by Senate Commerce Committee Chair Maria Cantwell's (D-Wash.) decision to hold a second hearing on Biden's nominee last February instead of bringing the nomination to the Senate floor for a vote.

"There's no mystery about what has caused the inexcusable delay in confirming Sohn, a highly qualified nominee with decades of experience and a powerful track record advocating for transparency and accountability," said Greer. "Gigi Sohn has been the target of a dark money smear campaign funded by telecom giants who want to pick their own regulator. Embarrassingly, Senate Democratic leadership have allowed these unfounded attacks to drag out the process."

While the Biden administration and Senate Democrats have said protecting the rights of those who seek abortion care are top priorities, Greer noted, they have allowed a delay that's been "disastrous for privacy and reproductive rights."

"The FCC has significant authority to protect the privacy of people seeking and providing abortions by cracking down on the collection, sale, and sharing of cell phone location data," she said. "But right now the agency is sitting on its hands, because it can’t do any of these things without a fifth commissioner."

"Enough is enough," she added. "The Senate must move swiftly to confirm Gigi Sohn so that the FCC can get back to work protecting people's basic human rights and ensuring access to affordable, open Internet for all."

(Julia Conley is a staff writer for Common Dreams which first published this article.).