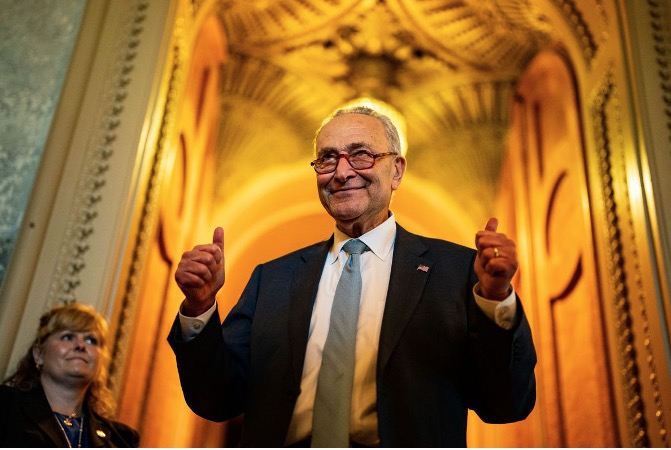 GUEST COMMENTARY - Could somebody please get an extension ladder to help Senator Schumer down from the ceiling?

He’s stuck in the rafters in a high-pitched note of self-congratulation whilst spraining his elbow as he awkwardly and repeatedly tries to pat his own back, screaming over and over again “the greatest climate legislation of all time!”

Still, one signal that something really good must be in the nonsensically titled Inflation Reduction Act is the fact that no Republican senators voted for it. Nowadays, the extreme right has the entire Republican edifice on its hands and knees, almost in a fetal position in a deadly chokehold, and they’re not about to risk voting for anything that smacks of help for ordinary Americans. Plus, as for climate-type legislation, they detest mention of global warming. It gives ‘em the willies.

Nevertheless, in spite of 100% Republican opposition, the bill is likely to pass and become law. It does a lot of really good things to help climate change/global warming. There is no doubt about this.

The real question is whether it’s enough soon enough. And, similar to all commitments by nations of the world to mitigate climate change, will it really happen? Climate change mitigation plans have a very spotty, almost zero, record of achievement.

The bill directs about $370 billion (that’s a lot) over 10 years toward promoting clean energy and climate resilience, with about two-thirds of the money coming in the form of tax credits for producing electricity from clean energy sources, investing in renewable energy technologies and addressing climate change through carbon sequestration, renewable fuel production, and clean energy manufacturing.

According to Evergreen Action, a left-of-center advocacy founded by former staffers to Gov. Jay Inslee’s presidential campaign, which advocated zero emissions by 2035 when some other candidates didn’t even know what zero emissions really meant: “The bill is an opportunity for a major breakthrough in America’s fight against climate change. This bill has the potential to be the single largest investment in clean energy in American history. Making major investments in clean energy is one of the best ways Congress can lower inflation and shield Americans from the volatility of fossil fuel markets.” (Source: How the Senate Climate Bill Could Slash Emissions by 40 Percent, Scientific American, July 28)

The bill includes $60 billion to boost domestic clean energy manufacturing, including $30 billion in production tax credits for solar panels, wind turbines, batteries and critical mineral processing. It also offers lower- and middle-income motorists a $7,500 tax credit for clean vehicles, while states and electric utilities would see $30 billion in grants and loans to expand clean energy. The bill also includes $60 billion for environmental justice communities and a fee on methane emissions that will rise to $1,500 a ton by 2026.

The Nature Conservancy released the following statement on Aug 7th: “The Senate’s approval of the Inflation Reduction Act gives us hope, and more optimism than we’ve had in years, that the U.S. Congress recognizes the urgency of the global climate crisis and is prepared to lead a meaningful response.”

Almost all environmental advocacy groups favor the legislation. Indeed, it would be ridiculous to naysay the only true broad-reaching climate legislation in American history.

But, is it enough soon enough? Which may have been on the minds of legislators in Washington, D.C., assuming the nation’s intelligence agencies sent them classified notes about the most frightening climate behavior in human history, i.e., the world is drying up!

And, maybe they read the recent NASA/National Oceanic & Atmospheric Administration report that the planet is trapping heat at a rate that’s twice as fast as only 15 years ago.

Carbon emissions have turned the planet into a heat machine. Compelling evidence of this tragedy is found throughout the world, as follows. It demands a much bigger Inflation Reduction Act but on a worldwide coordinated basis:

According to SPEI Global Drought Monitor, severe drought is now found throughout the planet.

A recent University of Cambridge University study claims that since 2015 European drought has accelerated and intensified. In fact, the continent is experiencing the most intense drought in 250 years.

Italy’s Po River Valley, as of July 2022, has cut water for 125 towns. Drinking water is delivered via trucks to Piedmont and Lombardy, as local reservoirs no longer exist. They’re gone! Italy’s drought alert is now spreading to the central part of the country to the rivers Arno, Aniene, and Tiber where water levels are “drastically down.”

The Rhine River, Europe’s most important waterway for commerce and industry and tourism, is close to shutting down. Key shipping lanes are down to 19 inches water depth. This is happening two months before the normal seasonal lows. Transports already reduced from 6000-ton loads to 800 tons but may be forced to halt completely, depending, and making coal shipment to Germany and inclusive of all commercial goods, a horrendous challenge for upcoming winter months.

In France more than 100 towns are without drinking water and now receive water deliveries by truck. The government has established a water crisis team. Trees and bushes are prematurely shedding leaves. France’s nuclear power plants, at a time when half of its 56 reactors are offline due to maintenance and serious corrosion issues, are now threatened due to river water temperatures used to cool the reactors. Restrictions kick in 26°C. Some plants are experiencing 28°C and 30°C river water temps.

In Spain, water restrictions have been imposed on Barcelona, Malaga, Huelva, and Pontevedra. Catalonia has severe restrictions on individual liters per day. The price of olive oil is likely to spike by at least 25% as heat hits crops.

In Portugal, 99% of the country is experiencing severe drought. It’s the driest in 1,200 years. Lawn watering prohibited.

According to NASA, the worst drought in 900 years is hitting the entire Middle East. A Carnegie Endowment study as of 2022 claims water scarcity is threatening violent conflicts throughout MENA, the acronym for the Middle East and North Africa. 80-90 million people in the region will experience water insecurity within three years. The European Commission Joint Research Center, in a recent study, claims there’s a 75%-90% chance of water wars.

Santiago’s population of 6.5 M is on a severe water-rationing program with rotating 24-hour cutoffs for homes in the city. On the suburban outskirts of Santiago, water is delivered by truck to 400,000 families or 1.5M people. They are allotted 50 liters (13.2 gallons) water per day per person. Additionally, in the northern regions of Chile, precipitation is down 90%.

In Argentina, the drought is so bad that the famous Iberia wetland is at its worst levels in 80 years as fires raged earlier this year in one of the world’s largest wetlands.

In SE Asia, the Mekong River, the principal river for the entire region, is in 4-year drought, the worst in 60 years. Cambodian water for crop irrigation is down to 20% of normal.

China has informed Guangzhou (pop 15M) and Shenzhen (pop 12.5M), the country’s tech hub, to cut per capita water use from January to October of 2022. The Pearl River Basin, which serves as the water source for China’s most populous urban centers, as mentioned, has been hit with severe drought, plus the looming drinking water crisis is compounded by drought-induced saltwater intrusion.

In Japan, Matsuyama (pop 515K) and Shikokuchuo (Pop 84K) are rationing water to citizens. Some areas of the country are experiencing crippling water shortages. The country is also experiencing power shortages and intends to go to more coal.

In Africa, Ethiopia and Kenya are faced with brutal drought. Three million livestock have died under the fierce influence of heat. In the Horn of Africa, 20M people are at risk of starvation and failure of water supplies.

Is the Senate’s Inflation Reduction Act of 2022 big enough, soon enough? Probably not.

Congress really needs to go back to Biden’s initial $3.5T Build Back Better Plan. In that regard, The Economist, July 21, 2022 ran this article: American Climate Policy is in Tatters—Manchin Single-handedly scuttled Biden’s BBB Plans for $3.5 trillion.

The entire planet is reeling from global warming. America’s modest couple hundred billion climate plan is a drop in the world’s bucket. The whole world needs to mimic Biden’s original BBB plan, or it’s lights out. The evidence of that is compelling, unless, of course, facts don’t count any longer.