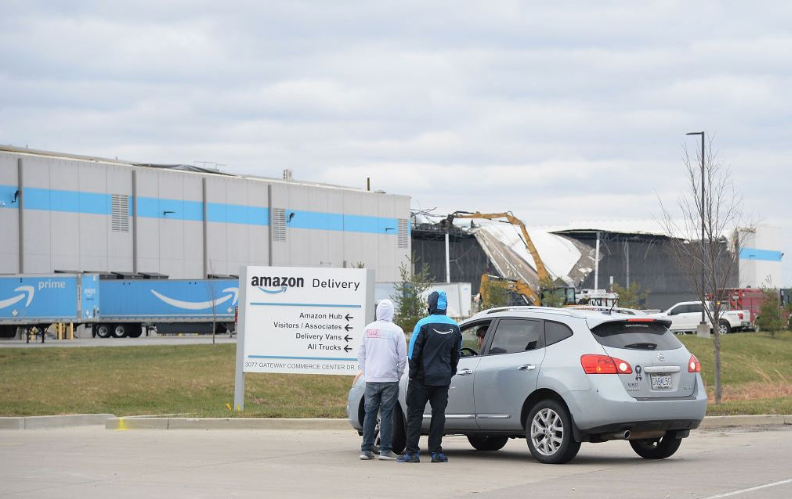 WORKER SAFETY - The fight for justice and accountability continues for six Amazon employees who were killed when a warehouse roof collapsed during a tornado last December.

Federal officials are investigating possible health and safety violations at the facility in Edwardsville, Illinois, a suburb of St. Louis. Illinois lawmakers are considering raising statewide standards for warehouse construction to prevent future tragedies. And family members of one of the employees, Austin McEwen, recently filed a wrongful death suit against the giant retailer.

“My daughter was not expendable,” said Jeffrey Hebb at a January rally in front of the Edwardsville facility. Hebb’s daughter, 34-year-old Etheria Hebb, died in the warehouse collapse, leaving behind a one-year-old daughter.

“Amazon was supposed to keep them safe,” Hebb said. “They didn’t do that. How does a company worth over $1 trillion let this happen?”

Despite multiple severe tornado watch alerts in the surrounding area, Amazon workers were advised not to leave the facility the night of the storm. With Amazon forbidding personal cell phone use at work, workers were also cut off from all communication with loved ones.

While the e-commerce giant claims the building was up to code and that workers followed safety procedures to shelter during the storm, that offers little solace to the workers and their loved ones who believe this tragedy could have been prevented.

“I understand that these safety procedures take time and money and would have impacted the company’s bottom line and that profits are good,” she added. “But how much profit is worth it when it comes to the dignity and safety of workers who contribute to that profit? How many homes for one person are enough? How many yachts? How many trips into space?”

Workers for other large low-wage employers are showing support for the Amazon warehouse workers and their families.

“Why are fast food workers here standing with Amazon workers? Because an injury to one is an injury to all,” said Terrence Wise, a McDonald’s employee and organizer with the Fight for $15 and Stand Up Kansas City at the Edwardsville rally.

“Amazon and McDonald’s are the second- and third-largest employers in the United States,” he noted. “What happens to us and the workers at trillion-dollar corporations is going to set the standard for workers across the whole economy.”

The Occupational Safety and Health Administration (OSHA) has embarked on a six-month investigation of the warehouse collapse and will “issue citations and propose monetary penalties if violations of workplace safety and or health regulations are found,” said a spokesperson for the Labor Department.

Meanwhile, workers will continue to build cross-movement solidarity to fight for a world where everyone can work with dignity.

The fight for accountability for the Edwardsville Amazon workers is happening at a time ofincreased organizing activity at the retailer’s operations.

A new labor group, called Amazon Labor Union, is attempting to organize workers in warehouses on New York’s Staten Island. Meanwhile Amazon warehouse workers in Bessemer, Alabama are getting a second chance to vote on unionization, after the National Labor Relations Board ruled that the company had interfered with the election process last year. Results of the revote are expected by March 28.

Last December “it was them, but it can be any of us,” said McDonald’s worker Wise at the Edwardsville rally. “It’s time we organize. It’s time for all of us to build worker movements that are powerful enough to raise wages and win a union.”

(Rebekah Entralgo is a writer for OtherWords where this article was first published.)