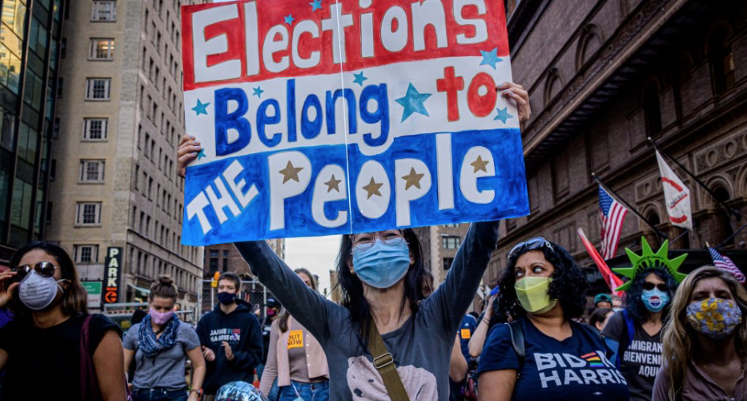 VOTING RIGHTS-Hey, you, get away from those polling places! No trespassing! We don't want your kind here! Scram!

How's that for a winning political message? It is stupid, shameful, and ultimately self-defeating, yet being blatantly anti-democratic and anti-voter is the official electoral strategy being enthusiastically embraced nationwide by Republican officials and operatives. Admitting that they can't get majorities to vote for their collection of corporate lackeys, conspiracy theorists and bigoted old white guys, the GOP hierarchy's Great Hope is crude repression -- rigging the rules to shove as many Democratic voters as possible out of our elections.

The main targets of the GOP's vote thieves are people of color, but they're also pushing measures to keep students, senior citizens, union households and poor communities from voting.

They're banking on a blitz of bureaucratic bills they're now trying to ram through nearly every state legislature, using government red tape and the iron fist of government autocracy to intimidate, divert and otherwise deny eligible voters the ability to exercise their most fundament democratic right. The main targets of the GOP's vote thieves are people of color, but they're also pushing measures to keep students, senior citizens, union households and poor communities from voting.

Unable to come up with any actual need for these autocratic restraints on certain constituencies, the political perpetrators have all resorted to exclaiming in mock horror: "Fraud! Massive election fraud everywhere! Millions of illegal immigrants, dead people, Chinese, children -- even pets -- are voting! The sky is falling! Lock down the polls!" Again and again, these absurd claims have been thoroughly investigated—even by Republican judges, committees, media, etc. -- and repeatedly, they've proven to be. . .well, absurd. Let's be blunt: You're more likely to find Bigfoot than you are to find a case of mass vote fraud in America.

Even some GOP politicos have quit pretending that they're searching for The Big Cheat, instead bluntly making a right-wing ideological argument for subverting democracy. "Everybody shouldn't be voting," explained Rep. John Kavanagh, the Republican chair of Arizona's election committee. Slipping deeper into doctrinaire doo-doo, he asserts that it's not just the number of votes that should matter in an election. "(W)e have to look at the quality of votes," too.

Call me cynical, but I'm guessing that most Democratic voters would fall into his "low-quality" category.

Ralph Waldo Emerson told of a dinner guest who went on and on about the virtue of honesty, offering his own life as a model of perfect rectitude. "The louder he talked of his honor," said Emerson, "the faster we counted our spoons."

That's my reaction to the cacophony of phony piety now emerging from Republican governors and legislators. They are hellbent on passing more than 250 new state laws to stop progressive-minded voters -- particularly people of color -- from casting ballots. But they yawp endlessly, their campaign to legalize blatant voter suppression of Black, Latino, Asian American, indigenous, and other non-Caucasian voters is in no way racist! Rather, they are righteous crusaders, nobly protecting the "sanctity of the vote" from the unwashed hordes who are fraudulently electing Democrats.

Embarrassingly, though, the GOP's soldiers of suppression can't actually find any voting-fraud hordes, so they're simply declaring darker skin color to be proof of villainy. Panicky Georgia Republicans, for example, created a special Committee on Election Integrity this year, clearly to concoct new barriers that reduce Black turnout. One of its edicts oddly outlaws any early voting on Sundays. Why?

It's a flagrantly racist attack on the Black church. For years, a joyous tradition called "souls to the polls" has played out in Southern Black churches on Sundays prior to Election Day. After the sermon and prayers, congregants, ministers, musicians, and others in the church family travel in a caravan to early voting locations to cast ballots. It turns voting into a civic, spiritual, and fun experience. What kind of shriveled soul tries to kill that?

Apparently, the same shameful souls in the Georgia GOP who want to make voting a physical misery for those in non-Republican precincts. By intentionally understaffing these polling places, election officials have been forcing citizens to endure 10-hour waits in line to vote. Showing compassion and gumption, local groups have been providing water and snacks to those in line. No more, decreed Georgia's House Republicans in March, voting to make it a state crime to give any sustenance to the needy electorate.

Excuse me, but voting in America should not be made hard, turned into a partisan obstacle course or reduced to a regimen of autocratic suppression. Indeed, the goal (and duty) of every public official ought to be maximizing voter turnout—making it easy, comfortable, uplifting and (why not?) fun. After all, the more Americans who vote, the stronger our democracy. But there's the ugly political truth: Republican officials no longer support democracy, and they hope to outlaw it.

(Jim Hightower is a national radio commentator, writer, public speaker, and author of the books "Swim Against The Current: Even A Dead Fish Can Go With The Flow" (2008) and "There's Nothing in the Middle of the Road But Yellow Stripes and Dead Armadillos: A Work of Political Subversion" (1998). Hightower has spent three decades battling the Powers That Be on behalf of the Powers That Ought To Be - consumers, working families, environmentalists, small businesses, and just-plain-folks. This piece appeared on Common Dreams.org.) Photo: Erik McGregor/LightRocket via Getty Images     Prepped for CityWatch by Linda Abrams.