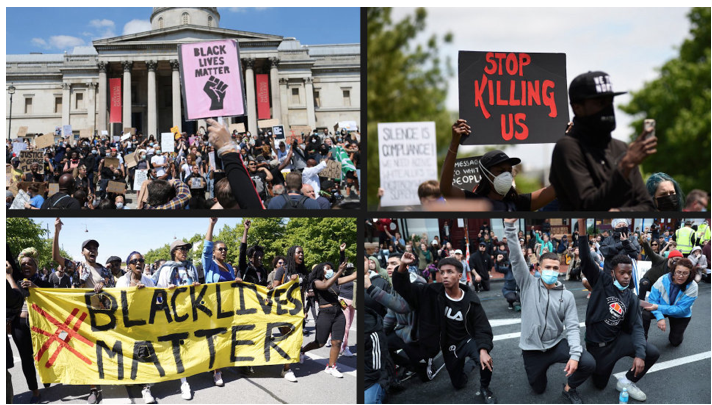 GUEST WORDS--“This was not an attack on history. This is history. It is one of those rare historic moments whose arrival means things can never go back to how they were.”

And the toppled statue of a 17th century slave trader, now at the bottom of Bristol Harbour, is suddenly more relevant than ever, as the cry for compassionate social order – sparked by the murder of George Floyd – begins to engulf the whole planet. Perhaps . . . oh, let us hope . . . we are at the point of real change, a shift in the collective consciousness that holds our social systems together.
Not only have the protests against police violence gone global, but they have cut deep into Western history: into its racism and colonialism, which, until now, have remained quietly unquestioned and entrenched in our institutional “normal.” A movement has begun to rethink the nature of public safety and, indeed, to rethink who we are.

For instance, a majority of Minneapolis city council members recently pledged to disband – and re-envision – the city’s police force: to “end policing as we know it,” as council president Lisa Bender put it, “and to recreate systems of public safety that actually keep us safe.”

This is the rebirth and continuation of the civil rights movement and may be the most serious undoing of racist normal that I’ve seen in my lifetime. And, as I say, protests and rallies have gone global, emerging across Europe, in Canada, Australia, Japan, Zimbabwe, Kenya. Could it be, despite endless political declarations to the contrary, that this is one planet?
Could it be that we can uproot our history and start over?

I’d never heard of Edward Colston and knew virtually nothing about the English city of Bristol. But when I read about the toppling of his statue, I realized this movement was not only wide but deep. A statue of Colston had stood in the center of Bristol since 1895. Hardly surprising. This rich, benevolent merchant had endowed schools, churches and hospitals in Bristol with his wealth, giving generations of city fathers reason to honor him and ignore an awkward reality: Colston was the deputy governor of the Royal African Company, the largest slave trader of its day. Slave-trading was the source of Colston’s wealth.

Historian David Olusoga, who is quoted at the beginning of the column, writes that Colston “helped to oversee the transportation into slavery of an estimated 84,000 Africans. Of them, it is believed, around 19,000 died in the stagnant bellies of the company’s slave ships during the infamous Middle Passage from the coast of Africa to the plantations of the new world. The bodies of the dead were cast into the water where they were devoured by the sharks that, over the centuries of the Atlantic slave trade, learned to seek out slave ships and follow the bloody paths of slave routes across the ocean. This is the man who, for 125 years, has been honoured by Bristol. Put literally on a pedestal in the very heart of the city. But tonight Edward Colston sleeps with the fishes.”

Turns out the Colston statue had long been controversial. More than 10,000 people had signed a petition demanding the city take it down, but of course this was ignored. So on June 7, in the midst of the global uprising against institutional racism, protesters did the job themselves. After it was down, Olusoga noted, one protester held his knee against Colston’s bronze throat, linking racist violence past and present. The statue was then thrown into the harbor.

This, Olusoga wrote, is history! History is not just artifacts and memories stuck for eternity behind glass cases, or monuments to a sentimentalized past, but something to be created in the present moment.

And part of this creation involves standing up to the truth of the past, looking at it in the context of the present moment: seeing it for what it was and, most importantly, addressing its impact on today. Without this, change is superficial.

Fascinatingly, Edward Colston is not the only honored racist to go down in recent days. Another statue that has lost its place of honor is that of the mayor of my home town, Dearborn, Mich. Its mayor from 1942 to 1978 was Orville Hubbard, a blatant racist known as the George Wallace of the North, who was outspoken in his efforts to keep his city, which bordered Detroit, completely segregated. The city’s motto during my childhood, emblazoned on its police cars, was “Keep Dearborn Clean,” which was generally understood to mean “Keep Dearborn White.”

Hubbard’s statue wasn’t toppled, but a couple days ago it was removed from in front of the Dearborn Historical Museum. Before that happened, protesters adorned the bronze mayor with a Black Lives Matter T-shirt, which fit surprisingly well.
And if we can remove the statues of the past, we can also begin reimagining the institutions grounded in the past, which we take for granted, such as the police. And this is now being done not just at protest rallies but within governing bodies, like the Minneapolis City Council. Only in recent weeks did such a thing even seem possible, but now we see that American institutions are as vulnerable as its statues.

Policing, after all, has deeply racist roots. In the South, the police were originally slave patrols: groups of vigilantes organized to capture runaway slaves. This embedded racism is painfully evident today. Defunding the police doesn’t mean abandoning our communities but truly protecting them. It could also mean, as CNN reported, defunding and terminating “the culture of punishment in the criminal justice system.”

CNN, quoting the Minneapolis community-advocacy organization MPD150, made the point that “law and order isn’t abetted by law enforcement, but through education, jobs and mental health services that low-income communities are often denied.” Furthermore, first responders shouldn’t be “strangers with guns” but rather “mental health providers, social workers, victim advocates” and other professionals whose focus is the community’s well-being.

In many communities of color, “enforcement of the law” is little more than an abstract justification for acting like an army of occupation.
As the rallies and the protests continue, so must the conversations – national and global – about what comes next.

(Robert Koehler ([email protected]), is made available  by PeaceVoice, is a Chicago award-winning journalist and editor. He is the author of Courage Grows Strong at the Wound.)