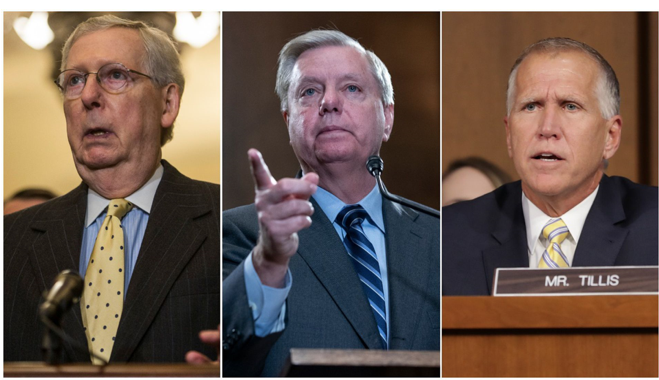 A growing number of Republican senators who voted to acquit Donald Trump at his impeachment trial in February are considering a “revote” in order to have him removed from office, according to an alleged leaked memo circulating among senators whose seats are most at risk in November.

The memo, believed to have been drafted by senior aides to Maine Sen. Susan Collins says in part, “the only way we can hold on [to the Senate]” is to remove the president.” The memo reportedly surfaced two days after Mr. Trump’s June 1 hardline speech in the Rose Garden calling for military action to quell protests set off by the alleged murder by Minneapolis police of an African American man, George Floyd, and before the scathing attack directed at Mr. Trump by former defense secretary Gen. James Mattis, the most well-known of a host of former military leaders rebuking the president for his dangerous anti-democratic positions.

In the putative memo Utah Sen. Mitt Romney, who is not up for reelection, urges at-risk senators to unify. “If the [10] most vulnerable senators stand together, it will send a strong signal for others to come along,” Mr. Romney is quoted as saying. Two-thirds of the 100-member Senate is required to convict. In February, Mr. Romney joined all 45 Democrats and two independents, in voting for one of two articles of impeachment, abuse of power. Those 48 votes were 19 shy of the 67 votes required.

“We’ll be in a better position to hold the senate with [vice president Mike] Pence in the WH,” the anonymized memo suggests, although nowhere does the document speculate on Mr. Pence’s chances of defeating presumptive Democratic nominee, former vice president Joseph R. Biden. Sen. majority leader Mitch McConnell, in a close reelection race of his own in Kentucky, was quoted saying, “We can only survive losing the White House if we hang onto the Senate.”

Four other senators who are all retiring also figure in the mix. Perhaps with an eye toward how they will be viewed by history, the memo suggests that the four, Tennessee’s Lamar Alexander, beleaguered Richard Burr of North Carolina, Pat Roberts of Kansas, and Mike Enzi of Wyoming also might be persuaded to vote to convict. If all 14 voted to remove Mr. Trump, that would bring the number to 62, five votes shy of conviction. Political observers tracking other prospective Republican senators who might reverse their earlier vote point to Alaska’s Lisa Murkowski, Ben Sasse of Nebraska, Chuck Grassley of Iowa, Mike Lee of Utah, and Rand Paul of Kentucky. All have criticized Mr. Trump on more than one occasion and may feel emboldened once they see how the political winds have shifted. If that happens, the senate will have reached the 67 votes needed.

“Sure, it’s a long shot,” a senate staffer who favors removing the president remarked while requesting anonymity. “But so was Donald Trump winning the presidency in 2016. He pulled an inside straight. We just need a royal flush.”

With the country reeling from a trifecta of trouble: the novel coronavirus, an economic collapse, and coast-to-coast uprisings against police violence against African Americans, Mr. Trump is seen as poison to all but his most steadfast supporters. “If ever there was a time to save the senate and save ourselves,” the leaked and plausibly actual memo concludes,” this is it.”