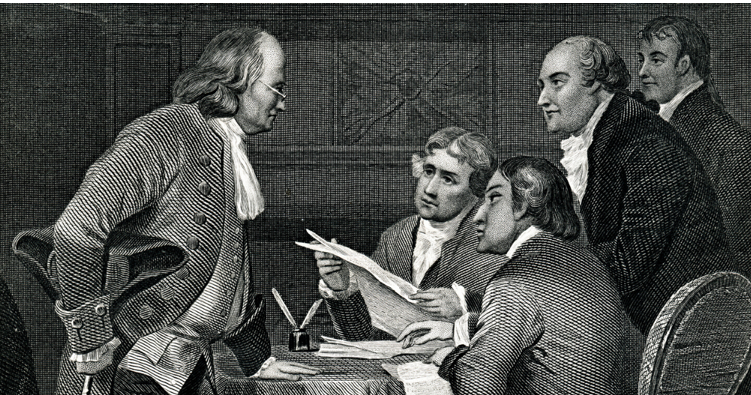 ONE MAN’S OPINION--When Benjamin Franklin (above left) described the type government which the Constitutional Convention had created, he could have followed up with “There is no greater threat to a republic than a democracy.”

The founding fathers expressly rejected a democracy, because democracies pose a lethal danger to the individual inalienable rights which are the sole justification of a just government.

When Thomas Jefferson wrote the Declaration of Independence in 1776, his audience was primarily men who were well educated in governance, especially political philosophy going back to Socrates, Plato, and Aristotle’s Politics.  The Declaration stated, “That to secure these [inalienable] rights, governments are instituted among men, deriving their just powers from the consent of the governed.”  A government which does not secure individual inalienable rights is unjust. It does not matter whether the mob votes for a tyrant.  A lynch mob may all agree to hang an innocent man, but the people’s unanimity does not make a just government.

As the founding fathers knew, the majority often gives way to its passions and tramples upon the rights of everyone else.  (Federalist Paper 51) The US Constitution separated religion and the government by the two clauses in the First Amendment to protect individual liberty.  If a majority should vote to make Protestant Christianity the official state religion and only its believers could hold office, soon or later the passion of the majority would so vote making Christianity a requirement to hold public office.  Because we have lived in a Republic for over two hundred fifty years, we have forgotten about the tyranny of the majority.

On the other hand, a Republic must be based on the consent of the governed and not on the word of a monarch or a dictator that individuals are enjoying inalienable rights.  Thus, the US Constitution established a complex system of voting including the electoral college (which has been a failure), the indirect election of Senators (which the 17th Amendment  changed to direct election in 1913), each state’s having two Senators without regard to population, the Supreme Court not being elected and having life time tenure.

As they were realists, the framers knew that someday the Presidency could be occupied by a person who was grossly incompetent, a dictator, or mentally unstable (as they had seen with King George).  From the beginning of human history, men had recognized that smart leaders can be evil.  The Presidency, therefore, could not rest solely upon the passions of the majority.  The US Constitution provided the Republic with a process of impeachment and removal a President.  In 1967, the 25the Amendment added another means to remove a sitting President. It’s a convoluted process but its gist is that when a President becomes physically or mentally unable to discharge his duties, the Vice President may assume the Presidential power.

The common element of the impeachment-removal process and of the 25th Amendment is the collective judgment of various leaders is required to remove the President.  The underlying motive of overriding the will of the people is that the President’s behavior threatens the individual inalienable rights on which the legitimacy of the entire government rests.

Impeachment and removal are based on the behavior of the President when he had engaged in “treason, bribery, or other high crimes and misdemeanors.”  To protect the President from the passions in democratically elected House of Representatives, the House’s articles of impeachment serve as charges against the President who will be tried in the Senate. The 25th Amendment has never been used to remove a mentally ill President, although it could provide the basis to remove Trump.

In practice, the constitutional process of both removal after impeachment and under the 25th Amendment will most likely function only by an informal process. The practical course was devised for Nixon.  The leaders of both political parties obtained the firm commitment of Representatives and Senators to not only impeach but to also remove Nixon.  In face of an overwhelming bipartisan front, Nixon chose to place the national welfare first and resign.

Since Nixon’s time, the United States has become a House Divided between GOP and Dems. While traditionally the Democrat and Republican parties were not strictly divided along ideological lines, those days are history.  Today, Dems who cooperate with GOP are seen as traitors and vice versa. Each party fears that its own extreme element will revolt.  Thus, GOP Senators cannot vote to remove a GOP President.  The only process which has functioned was Nixonization. Not only does no member of the President’s party have to publicly vote to remove him, but the President himself assents to his stepping down.

Nixonization cannot be some elite cabal but rather it too must have the indirect consent of the governed.  The moderate GOP voters were turning against Trump and the GOP leadership was signaling the additional evidence that they needed the House to produce so that they could safely turn against the mentally unbalanced President.  Against the advice of constitutional scholars from both the left and the right, Speaker of the House Nancy Pelosi sabotaged Nixonization of Donald Trump by stopping the House from continuing to collect evidence to Trump’s horrible behavior.  April 16, 2020, CityWatch, The Real Reason Nancy Pelosi Does Not Want to ‘Nixonize’ Trump.

A person with a serious personality disorder like Donald Trump cannot improve.  They do not grow into the Presidency any more than a paraplegic can win the 100-yard dash.  “A narcissistic Histrionic” is a meaningless term to 99.99% of Americans, but under pressure such persons decompensate.  As we are seeing during the Covid-19 Pandemic, Donald Trump ignores medical advice, he continues to tell lies, he urges people to make deadly decisions, he accepts no responsibility, he fires our watch dogs. His latest action is to dictate to governors.

We had a constitutional means to remove Donald Trump, but the Dems chose not to protect the Republic because they believed that Trump’s madness would result in a huge Dem win in November 2020.  Now tens of thousands of Americans are needlessly dead and a civil war after the election is quite likely.

None of the veterans died so that a mentally ill madman, a would be dictator, could subvert the Republic.