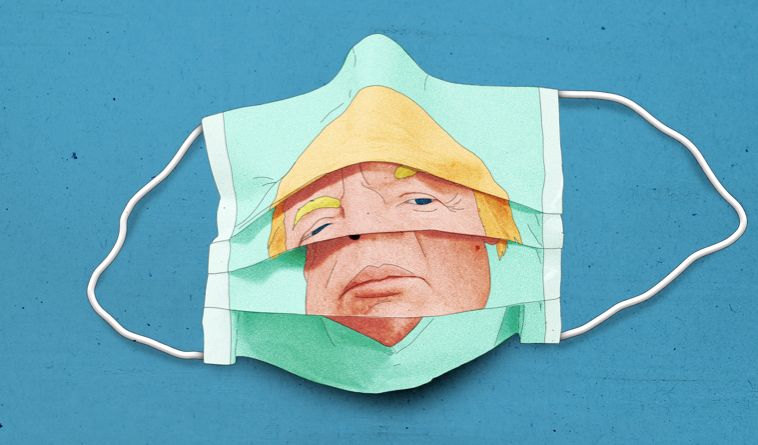 VIEW FROM HERE-Ten reasons why. . .

1.  To symbolically apologize to every woman who he has demeaned, intimidated, forcibly touched, and silenced.

2.  To block some of the sound vibrations coming from his mouth, so the world can hear a little less rambling and vitriol.

3.  Because migrants-many of whom were traveling with their children- had to wear something over their mouths, after he sanctioned U.S. border agents to fire tear gas at them near the U.S.-Mexico border.

4.  To remind the citizenry of this nation that American presidents are duly elected by the people. No one is above the law and no one is entitled to infringe upon the human and Constitutional rights of others. By not wearing a mask, Trump is flaunting these inalienable and sacred obligations and putting other people's life, liberty, and pursuit of happiness at risk.

5.  To follow his own administration's guidelines. The Centers for Disease Control and Prevention (CDC) is encouraging all Americans — even people who feel healthy — to wear cloth face masks or homemade face coverings in public when 6-feet social distancing is difficult to maintain.

6.  To represent those women in predominantly fundamentalist Islamic communities, who do not have a choice whether to wear burkas or hijabs. As someone who has cried out against the evils perpetrated by "radical Islam", Trump is missing an opportunity to act in solidarity with the oppressed.

7.  Because the president is an uncanny marketer who can turn almost any product into a vehicle for his family's brand. Why not wear a MAGA mask? He says it is because a mask will make him look stupid, but he must know how stupid he looks wearing a cheap red, sometimes made in China hat. What's the difference? Why not politically capitalize on a fashion trend that the vast majority of Americans are already acquiring and displaying whenever they leave their homes?

8.  As the most influential person in the free world, Trump can change behavior on a massive scale. If the President wants to stop the spread of COVID-19 and open the country again, he should use every tactic in the pandemic playbook. In other words, by not wearing a mask, the President is sending mixed signals to his most avid supporters, thus confusing them, and leaving thousands if not millions of people wondering what to do about their own safety. If Trump's followers would simply wear them, that would likely advance the goal of normalizing society. (I realize that not every person who goes without a mask is a supporter of the President.)

9.  From Adam West and Burt Ward in Batman to firefighters during 9/11 to the medical workers on the front lines today, wearing a mask has been and continues to be associated with heroism. For whatever reasons (no doubt motivated by envy and vanity), the President is missing a chance to identify with the most popular people in America right now-our public health workers.

(George Cassidy Payne is a social worker and adjunct professor of philosophy. He lives and works in Rochester, NY.) Prepped for CityWatch by Linda Abrams.