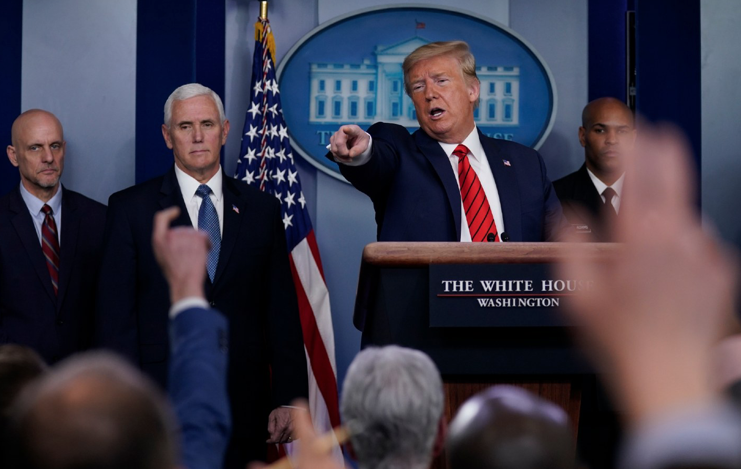 GUEST WORDS--There is no dearth of examples suggesting that President Donald Trump lives in an alternate reality.

But his belief that the coronavirus “came out of nowhere” and “blindsided the world”—even though public health experts had been warning about the next pandemic for years—may be the reason why the United States is so unprepared to deal with the crisis.

In 2018, he weakened the country’s ability to respond to pandemics when he decided to dismantle a National Security Council directorate at the White House charged with preparing for them. His Interior Department failed to update a pandemic plan that was first prepared over a decade ago. His administration failed to restock the Strategic National Stockpile, America’s store of medical supplies, which include the face masks that are in such dire need by doctors, nurses and health professionals at the front lines of the pandemic. Those supplies were depleted during the H1N1 flu pandemic in 2009 and were never replenished: Millions of masks in the stockpile are now past their expiration dates.

The lack of test kits, as well as faulty test kits produced by the Centers for Disease Control and Prevention (CDC), may have been the result of Trump’s budget cuts: The CDC’s current budget of $8 billion is a substantial reduction from the $12.7 billion it had a decade ago. “The debacle with the tests probably reflects underlying budget cuts,” said Scott Burris, director of the Center of Public Health Law Research at Temple University. “You can’t have surge capacity if you’ve already been cut to the bone.”

And, strikingly, the United States had several weeks of advance notice of the coronavirus, which first appeared in Wuhan, China, in December, but those early weeks were squandered and now the nation is on its back foot, perhaps with tens of thousands of lives at stake, maybe more. “Trump’s leadership team failed to ready the nation, despite explicit warnings of the need to do so,” writes Alice Hill, the senior fellow for climate change policy at the Council on Foreign Relations, and who was responsible for biological threat preparedness in the Obama administration.

Following the criticism that he has mismanaged the nation’s response to the coronavirus epidemic, Trump has attempted a bold rebranding campaign, declaring himself a “wartime president.”

“Every generation of Americans has been called to make shared sacrifices for the good of the nation,” Trump said at a March 18 White House press briefing, recalling the courage and commitment of those who lived through and fought in World War II. “And now it’s our time. We must sacrifice together, because we are all in this together, and we will come through together. … And it will be a complete victory. It’ll be a total victory.”

His “war” rebranding appears to be working: A majority of Americans now approve of Trump’s handling of the pandemic, according to an ABC News/Ipsos poll released today. The latest figures—55 percent approve, while 43 disapprove—represent a flip in the president’s rating from the previous iteration of the survey, published a week ago, which found 43 percent approval and 54 percent disapproval.

But treating the pandemic as a war may have other consequences, like influencing the psychology of the American electorate during an election year. And it’s important to note that no American president has lost reelection during wartime, a fact that is likely not lost on Team Trump. James Madison was reelected in 1812 during that year’s eponymous war. A half-century later, Abraham Lincoln was reelected during the Civil War. In 1944, in the midst of World War II, Franklin D. Roosevelt was voted back into the White House. Voters put Richard Nixon back in office during the Vietnam War. George W. Bush, fighting the Iraq and Afghanistan Wars, got his second term in 2004.

Trump made good on his characterization of wartime by invoking the Defense Production Act (DPA), which allows the federal government to compel private companies to manufacture goods for the benefit of the nation before making those same products for commercial sale; in this case, medical equipment to handle the pandemic. Inspired by World War II-era laws that allowed the government, for example, to request that Ford Motor Company manufacture hundreds of thousands of vehicles for the army, including tanks, the DPA was first approved by Congress in 1950 to support the nation’s production needs to support its effort in the Korean War.

Vox’s Alex Ward writes that Sasha Baker, a top aide to former Defense Secretary Ash Carter, told him that “some people may get scared or anxious hearing the act has been invoked because it makes it seem like the nation is gearing up for war.” But, as the coronavirus pandemic sweeps across the globe, followed by a steadily rising death toll, there may be another anxiety brewing, as CNN has suggested that there are “whispers” that President Trump could cancel the 2020 election and remain in power without being reelected. According to a Daily Kos poll, more than  60 percent of those polled (more than 340 respondents) are “concerned that President Trump will declare martial law and/or suspend the 2020 election.”

That concern was voiced by a leading conservative voice before coronavirus even made the headlines. On December 10, after Attorney General William Barr appeared to “whitewash” Russian interference in the 2016 U.S. presidential election in an interview, Norman Ornstein, a scholar at the conservative American Enterprise Institute expressed grave concern that Trump may upend the Constitution to remain in power. “The Barr interview today is even more frightening than many Americans imagine,” Ornstein tweeted. “It seems clear that he will do or enable anything to keep Trump in office. And Trump will do anything to stay there. Suspension of the election, negation of the results, declaration of martial law.”

Trump has mused several times about staying in the White House longer than is legally allowed. In March of last year, for example, he mentioned the idea of remaining in power for life, after praising President Xi Jinping’s own lifelong rule, which was secured when China’s ruling Communist Party approved the removal of the two-term limit. “He’s now president for life,” Trump said about Xi. “And look, he was able to do that. I think it’s great. Maybe we’ll have to give that a shot someday.” A few months later, in a Tweetstorm, Trump said that he would leave the presidency in “10 or 14” years. He did add “just kidding,” but that may offer little comfort to those who fear his autocratic tendencies, love of dictators and frequent disregard for the Constitution. Then in December, on the same day that Orenstein tweeted his warning, Trump, during a campaign rally in Hershey, Pennsylvania, said that he may stay in office for another 29 years. (He would be 102 years old at that point.)

“As democracies around the world slide into autocracy, and nationalism and antidemocratic sentiment are on vivid display among segments of the American populace, Trump’s evident hostility to key elements of liberal democracy cannot be dismissed as mere bluster,” writes Elizabeth Goitein, a co-director of the Liberty and National Security Program at the Brennan Center for Justice. “The moment the president declares a ‘national emergency’—a decision that is entirely within his discretion—he is able to set aside many of the legal limits on his authority.”

Former Philippine President Ferdinand Marcos ruled for 21 years, nine of them as a dictator while the country was under martial law, which he declared under the guise of suppressing civil strife and a communist threat after several bombings destabilized the capital city of Manila. With the pandemic striking fear in the hearts of Americans, Trump now has his perfect pretext to consolidate power. But will he declare martial law?

In fact, some are calling on Trump to declare martial law to help stem the spread of the virus. “I say to President Trump: Shut us down, sir. Please, just shut us down,” writes Gene Marks, founder of The Marks Group, a small-business consulting firm, in an op-ed on The Hill. “I mean the whole country. Not just New York or San Francisco, but Louisville, Denver, Harrisburg, Clearwater and Madison. Every small town, whether there’s a case or not. I’m talking martial law. Do it. You said you’re now a ‘wartime president.’ So, act like one. … I ask you to do this because I’m a small business owner. What we’re doing right now is not helping the economy. By imposing a strict national quarantine, the effects for my business—and the economy overall—would be very, very positive.”

If our self-proclaimed “wartime president” were to declare martial law to fight the pandemic, would he have the authority to suspend the election in November? Josh Douglas, an election law scholar at the University of Kentucky Law School, doesn’t believe so. “Even [martial law] would likely not give him power to postpone election or delay end of his term on Jan. 20, 2021,” he tweeted. “As Supreme Court said in ex parte Milligan (1866), martial law does not suspend the Constitution.”

But Ian Millhiser, a senior correspondent at Vox, where he covers Supreme Court issues, points out that the courts usually defer to national security decisions made by presidents, citing the Supreme Court’s decision to uphold Japanese-American detention camps during World War II and, more recently, President Trump’s Muslim travel ban. “American election law was not written with a pandemic in mind,” he writes. “Extraordinary measures may be necessary to control the spread of coronavirus for many months — possibly continuing well into the November election season. And if those extraordinary measures do disrupt the general elections, courts are likely to defer to public health officials even if those officials act with partisan motivation.”

John W. Whitehead, founder and president of the Rutherford Institute, a nonprofit civil liberties organization based in Charlottesville, Virginia, views the coronavirus pandemic not as a test of our ability to come together as a nation in a time of crisis, but rather as “a test to see whether the Constitution—and our commitment to the principles enshrined in the Bill of Rights—can survive a national crisis and a true state of emergency.”

Today in America, we find ourselves caught in the crosshairs of two powerful, unpredictable and dangerous forces—Trumpism and coronavirus. The stock market has lost all its gains since Trump took office, a 20 percent unemployment rate is in the offing, and Americans are dying. Will we pass this test? Will the Constitution survive?

New York Governor Andrew Cuomo, a Democrat, agrees with the wartime footing that Trump has initiated. “This is a war, we have to treat it like a war,” Cuomo said. “In a war, you need the federal government.” Sure, states need help from Washington to deal with the pandemic, from the health crisis itself to the economic crisis it has spawned. But before tanks start rumbling down New York’s Fifth Avenue and the Army Corps of Engineers cordons off neighborhoods with bollards and barbed wire, Cuomo might consider the warning of one of Trump’s more eloquent and sagacious predecessors, Thomas Jefferson: “A government big enough to give you everything you want is big enough to take away everything you have.”

(Martina Moneke writes for TruthDig.com … where this perspective was first posted.)