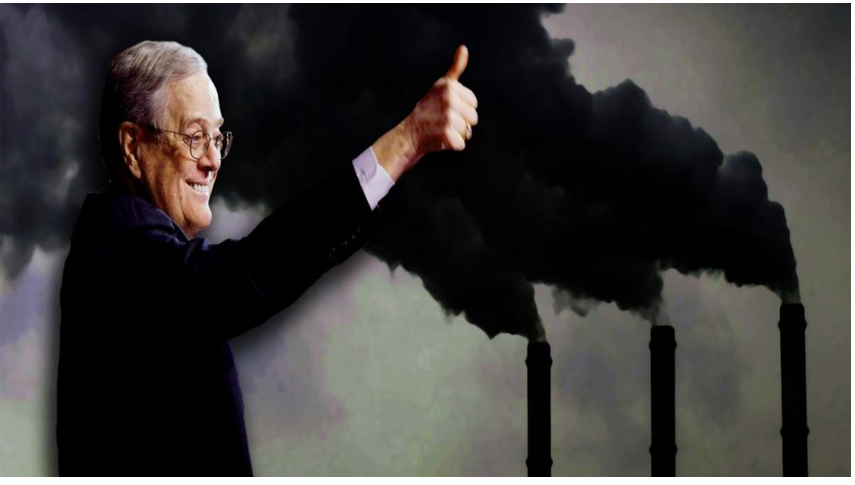 PERSPECTIVE--David Koch, one of the two infamous billionaire Koch brothers, died Friday at the age of 79.

The Wall Street Journal is quick to point out that, in addition funding a vast conservative political network, Koch gave about $1.3 billion of his nearly-$60 billion fortune to various philanthropies. But what Koch may ultimately be most remembered for is helping to seed the climate-change denial movement in the 1990s. Indeed, David Koch was one of the most powerful people in the world over the last three or so decades, and he did his level best to stymie any effort to stop the biggest threat to human society.

The Kochs' place in funding climate denial is covered well in the recent book “Kochland” by Christopher Leonard. They were big funders of a key 1991 Cato Institute conference, which mobilized furiously after President George H.W. Bush announced he would support a climate change treaty. They went on to spend gargantuan sums boosting up the handful of credentialed scientists who deny climate change, funding climate-denying "think tanks" and publications, donating to climate-denying politicians (and refusing money to those who don't), and so on. Greenpeace estimates that between 1997 and 2017 the Koch family spent more than ExxonMobil funding climate denial, and thus established climate-change denial as conservative dogma. While conservative parties in almost every other country have endorsed at least some kind of climate policy; the reason Republicans still do not is to a great degree the responsibility of just two men.

The Kochs were also key players in the successful effort to beat back a cap-and-trade bill in 2010, the closest the U.S. government has ever come to any kind of emissions policy.

The main reason they did all this, of course, was to protect and expand their gigantic fortunes — which were and are heavily based on fossil fuels. (In classic libertarian John Galt fashion, they inherited their money from their father, who was a founding member of the John Birch Society and made most of their additional money paying other people to dig up natural resources they neither created nor found.) As Jane Mayer writes in a review of “Kochland”:

“Leonard also quotes Philip Ellender, Koch Industries' top lobbyist, as claiming, in 2014, that the Earth had gotten cooler in the previous eighteen years. In fact, according to NASA, eighteen of the nineteen hottest years on record have occurred in the past two decades. Yet the Koch machine bought its way into Congress and turned climate-change denial into an unchallengeable Republican talking point. Meanwhile, after the cap-and-trade bill died, the planet continued heating, and the Kochs' net worth doubled.”

One underrated part of extreme inequality is how it warps the public discourse. In this case, two ultra-rich men with a bottom line to protect were able to spend so much on propaganda, campaign donations, university donations, and so on that they turned the brains in one of two American political parties to rancid tapioca. A nation with an egalitarian income distribution is one in which regular people have a much greater freedom to think.

Today a senile climate change denier is president of the United States, where he (wittingly or otherwise) has done the Kochs' bidding. Donald Trump has stacked the federal bureaucracy with Koch-style ideologues, cut taxes on the rich, rolled back environmental regulations, and tried to keep as many filth-spewing coal power plants in business as possible. Naturally, he is standing idle while the greatest number of fires ever seen are burning across the Amazon basin — apparently started by ranchers and loggers eager to cash in on the fascist presidency of Brazil's Jair Bolsonaro — threatening a catastrophic "dieback" in the rainforest that would release tens of billions of tons of carbon dioxide into the atmosphere.

In the decades to come, climate change will be the issue that determines the fate of not only American politics but human society. And it will be the issue on which the history books judge everyone, not just David Koch.

(Ryan Cooper is a national correspondent at TheWeek.com.  His work has appeared in the Washington Monthly, The New Republic, and the Washington Post. This was posted originally at theweek.com and most recently at Common Dreams.) Photo credit:  Prepped for CityWatch by Linda Abrams. Illustrated | Chip Somodevilla/Getty Images, Chung Sung-Jun/Getty Images, August 23, 2019)