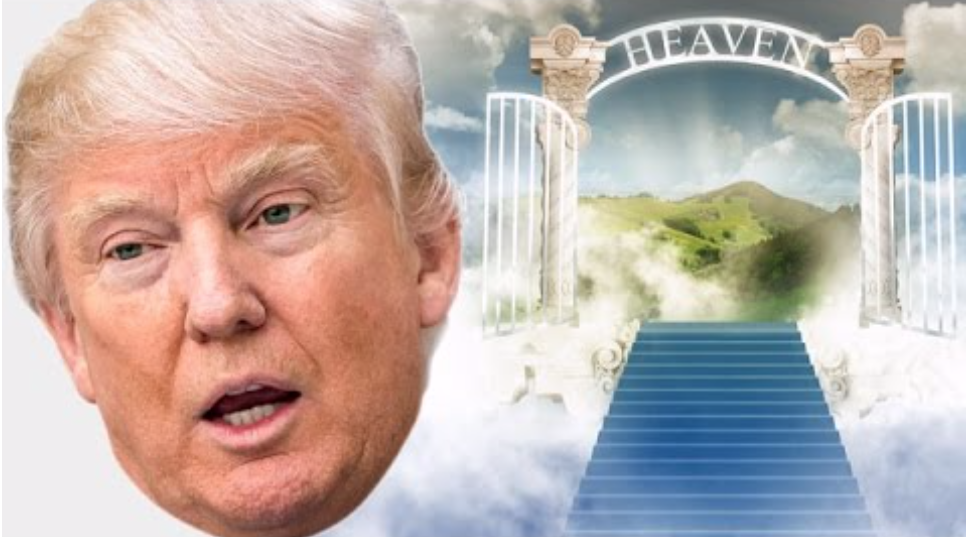 FUTURE SHOCKER-I attended Donald Trump’s funeral today in a half-empty Washington Cathedral, curious to learn how the 45th president, who of course resigned in disgrace in 2019, would be remembered by those who came to mourn him.

The only living former presidents, Mike Pence, Barack Obama and 100-year-old Jimmy Carter, were in attendance but did not speak to eulogize him. (Pence was scheduled to speak but was overcome by tears.) That task fell to Donald Trump, Jr., just out of prison after his early release following his conviction in 2019 for lying to Congress and the FBI.

“He was a great dad,” said a tearful Don, Jr. “He set an example that made me into the man I am today.”

Also speaking his praises was an elderly Rudy Giuliani, who said Trump had gotten a raw deal from Special Counsel Robert Mueller and had nothing to be ashamed of. “I admire President Trump for many things, but most of all for never backing down. He did nothing wrong and he stood his ground. By the way, is this on live TV?”

A parade of convicted felons followed Giuliani to the stage, all of them pardoned by Trump before he left office under the cloud of a pending impeachment for obstruction of justice and other high crimes and misdemeanors. Former Maricopa County, Ariz. Sheriff Joe Arpaio, speaking from a wheelchair at age 93, praised Trump for his tough stance on immigration. (“He treated those criminal migrant families a lot better than I would have.”) Former campaign chairman Paul Manafort said the president had stood behind him through thick and thin before pardoning him on the eve of his own resignation. (“He and I were on the same page, even when the whole world thought I was lying.”)

Korean dictator Kim Jung Un did not attend but sent a video of his latest nuclear ballistic missile test, and thanked Trump for making his nuclear arsenal possible.

Saudi King Mohammed Bin Salman sent an Instagram with a photo of a bone saw, along with the receipt for the 500 rooms his staff rented at the newest Trump hotel in Washington, D.C., and Vladimir Putin sent condolences to Melania Trump, even though she divorced Trump more than five years ago and did not attend the funeral. The former Mrs. Trump was seen walking on Fifth Avenue in New York earlier today in her legendary “Do You Really Care? I Don’t” jacket.

Presidential historian Jon Meacham described Trump as an anomaly among presidents: “He redefined what normal was and, unlike every president before him in recent memory, made it routine to depart from reason and truthfulness on a regular basis. As far as anyone can recall, he never issued an apology because he felt he had nothing in his life to apologize for.”

Former Interior Secretary Ryan Zinke, who rode his horse into the cathedral, said the world has Trump to thank for bringing coal back from the brink of extinction as a major fuel for power and source of jobs and praised him for rolling back a decade of Environmental Protection Agency rules that Zinke said were stifling the energy industry. In the 109-degree heat of Washington in August, Zinke mocked people fanning themselves in the cathedral and said there was no proof that human activities have contributed to the warming of the planet. “We need to open a few more national monuments to mining,” Zinke concluded.

Protesters outside the cathedral outnumbered mourners, according to police estimates, and D.C. officers on horseback fired teargas canisters into the crowds to keep them away from the cathedral. The chemical fumes seemed to make little difference in the heavily polluted air of the nation’s capital.

Ivanka Trump and her husband, Jared Kushner, of course, could not attend the funeral as they are still serving prison sentences for conspiracy connected with Russian hacking of the 2016 presidential election.

Trump’s friend and confidant Roger Stone offered to show the gathering his latest tattoo, a portrait of Trump. “As you all know, I’ve got Richard Nixon on my back, so Donald is a little bit lower down,” Stone said, before security escorted him to an exit.

The most mysterious aspect of the day’s events appeared in the crawl of FOX News’ television coverage of the funeral in the form of an anonymous tweet just as the ceremony was concluding:

“Don’t believe the failing New York Times. The Cathedral Crowd was HUGE, the biggest ever for a Presidential Funeral. I was watching from Above, I can tell you that. Disgraceful! Witch Hunt. No Collusion!!!”

(Steve Klinger is a veteran community journalist/editor/satirist and college English instructor based in southern New Mexico.) Prepped for CityWatch by Linda Abrams.