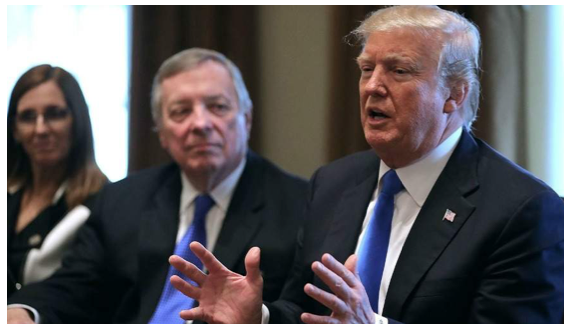 THE END OF CIVIL DISCOURSE-The funeral has begun. The casket lies open on the altar of decency and the asterisk rests quietly within, while the officiant prepares to close the coffin and lower it into its grave.

The officiant is Donald J. Trump. The asterisk has served us well and protected us from crudeness. Prior to its last gasp, it had been in a perilous state and its requiem had been sung. But hope sprang eternal, and it was hoped it might recover. It did not, and having been relieved of its suffering, will serve us no longer. Its final illness began many months ago when Donald J. Trump came onto the stage. It was he, with his grossness and contempt for civilized discourse, that caused the asterisk to begin its decline.

The asterisk had for years enjoyed its role of permitting those committing thoughts to writing, to make reference to words that might offend, by only hinting at their use rather than printing them in full. One of the early manifestations of the illness to which the asterisk was succumbing, appeared on October 8, 2016, on the front page of the New York Times. The lead article was entitled: “Tape Reveals Trump Boast About Groping Women.” In the second paragraph of that story, a story having nothing to do with dogs or cats, the words “bitch” and “pussy” appeared, and in the third paragraph, what was formerly referred to as “the F word,” appeared without the help of the asterisk, the paper apparently having concluded that it was no longer needed.

The editor who made that decision was confirmed in his belief that the asterisk was no longer an essential part of the literary world when one week later, in columns by noted columnists, Maureen Dowd and Nicholas Kristof, each of them eschewed the asterisk when referring to the fact that the crudity who had become the president of the United States, had agreed with the interviewer, Michael Stern, that his daughter, Ivanka, was a “piece of ***.” Unlike this writer, the two columnists declined the assistance of the asterisk in their pieces.

During the same period that the asterisk’s illness manifested itself in the New York Times, its affliction was also apparent in the Washington Post. On October 10, 2016, there was a story in “The Fix” about comments made by a Clinton aide. In the headline, the asterisk was alive and well. The headline was: “Clinton aide to Donald Trump ‘go * * * * yourself.’” Unquestionably proud of itself and its prominence on the front page of the Washington Post, the asterisk had to be disappointed when in the context of the article it found itself pushed aside in favor of the offending letters that were permitted to complete the word, a word that the asterisk knew even a few months earlier would never have been given voice in a publication as important as The Washington Post. Be that as it may. The debasement of the English language by the White House Fool, is now complete.

In demonstrating his complete lack of qualification to represent the United States in any respect, the White House Fool used a word to describe nations he holds in contempt that, to the knowledge of this writer, had not appeared in the mainstream press or been heard or seen on major radio or television outlets. And it was interesting to see how the transmogrification of the English language and the death of the asterisk was assured during the two or three days following the revelation from Senator Richard Durbin of what crudeness had been spoken by the White House Fool on January 11, 2018, when meeting with the senators.

When the report was first made public, at least one major network in describing the word used by the Fool, said it was not a word that journalistic niceties would permit to be uttered and simply hinted at it. The same approach was taken by various other commentators. Such niceties were soon cast aside. Within a matter of 48 hours or so, the asterisk, that had protected the sensibilities of the reader when the story was first reported in print, was discarded, and the offensive word appeared in full in all its glory surrounded for a few days by quotation marks that were apparently considered by the publisher to be a substitute for the deceased asterisk. In a recent column by Paul Krugman in the New York Times the quotation marks have gone the way of the asterisk. The word appears without even a suggestion that its advent into the main stream press is unusual or unwelcome. Like the printed press, radio and television now make no attempt to shield viewers and listeners from the offending word.

Those wanting a longer description of the travels of that word through the media since its advent a few short days ago, should go to a piece written by Sean O’Neil. In his column he traces the word’s treatment since it was introduced into polite society and provides an excellent description of how discretion and sensitivity have left our world. In their place, the White House Fool occupies a bigger and bigger part of it. Sad.

This work is licensed under a Creative Commons Attribution-Share Alike 3.0 License

(Christopher Brauchli is a columnist and lawyer known nationally for his work. He is a graduate of Harvard University and the University of Colorado School of Law where he served on the Board of Editors of the Rocky Mountain Law Review. He can be emailed at brauchli.56@post.harvard.edu. This piece was posted first at CommonDreams.)  Prepped for CityWatch by Linda Abrams.