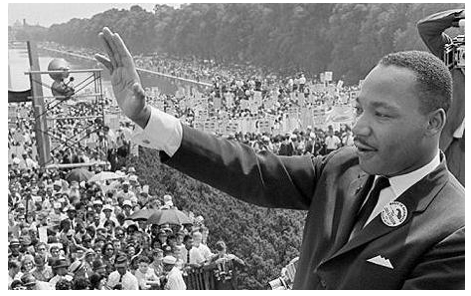 NON VIOLENCE--About a year ago, sometime between the feelings of depression that followed Trump’s election and his inauguration, an old activist friend – and occasional Capital & Main contributor – contacted me. Vivian Rothstein had traveled to the South to register voters during the civil rights movement, and she thought it was time again to focus on non-violence as a way of resisting what was floating to the surface in America. She meant not only white supremacy, but what many activists recognize in Trump’s authoritarian tendencies: a threat to democracy itself. Would I join a small group of people to offer trainings in nonviolent resistance, including civil disobedience?

I agreed, and teamed up with a few others who have spent most of their lives practicing some form of nonviolence. We shared Rothstein’s belief that training people from faith communities in the protest tradition was timely and could be effective political work. In the time since, we have developed a course and taught it in a handful of congregations – even to a couple of activist groups beyond the religious community.

What I did not expect from this experience was a re-immersion in the teachings of Martin Luther King, Jr. It turns out that preparing for and leading these trainings has become an on-going learning opportunity. We have re-read parts of King’s writing, like the “Pilgrimage to Nonviolence” chapter from his first book, Stride Toward Freedom. We’ve watched documentaries about his life, as well as a great segment on the Nashville sit-ins from the PBS documentary series A Force More Powerful. We have dug into serious questions from participants in the trainings, like what about nonviolence and the Holocaust?

We’ve been guided to much of this material by Andy Moss, a retired professor who taught peace studies for many years, and we each bring our own life pathway to nonviolence and civil disobedience. When we read King’s “Pilgrimage” chapter, I recognized my own intellectual journey. He and I had read the same theologians and philosophers, gone through similar questions, rejected the same dead ends – but he was a decade ahead of me in this academic workout.

It also took me a few more years beyond his life before I was fully committed to a nonviolent way of working. Caught up in the fervor of the late 1960s, I could not grasp the totality of life that nonviolence meant. As one of our team members, Abby Arnold, puts it, nonviolence is “three-fold: a philosophy, a spiritual practice, and a strategy.” I got the thinking part. I understood the strategies too. It took longer to get the inside-out part.

A life committed to nonviolence goes deeper than political activism or social change. It requires an interior life seeking a well-spring of motivation beyond anger, rage, or raw power. It requires a consistency between the inside and personal and the outside and public parts of our lives. I’ve known activists who will walk a picket line for all manner of peace and justice issues, but whose own personal relationships are bitter crucibles of conflict, hostility, even violence.

Studying King emphasized another issue for Elissa Barrett, also part of the teaching team: reconciliation. When the Montgomery bus boycott ended in victory over segregation, King preached that blacks should not flaunt their success at white people.  Boycott leaders even printed and distributed leaflets to blacks using the buses again to curtail their glee. This resolve came from a belief that it’s not people who are evil, but a system that maintains injustice and in which white people participated. It was justice the boycott won, not a defeat of people.

In stressing this point, the team shares stories of polarization bridged through gestures of reconciliation that follows conflicts. When the first car wash in America agreed to a union contract for its workers, community advocates took the management a potted plant as an affirmation that a new relationship between workers and owners could grow in that place. We also leafleted local congregations to let people know there was now a place to clean their cars that treated workers fairly.

Of course many Americans did not think of King’s voice as reconciling. This year marks the 50th anniversary of Dr. King’s assassination, a reminder that his teachings on nonviolence were so powerful that some people thought he had to be killed. His murder took place in Memphis, where King had joined a campaign for the rights of sanitation workers to form a union and receive fair wages.

Now this administration threatens the very existence of unions. Low-wage workers feel the sting of flat or stolen wages, even as deportation hangs over many of their heads. Democracy itself may hang in the balance. In such times as these, we know of no more effective way to meet injustice than re-immersing ourselves in King’s life and teaching people resistance through nonviolence.

(Rev. Jim Conn is the founding minister of the Church in Ocean Park and served on the Santa Monica City Council and as that city's mayor. This piece was posted originally at Capital and Main.)