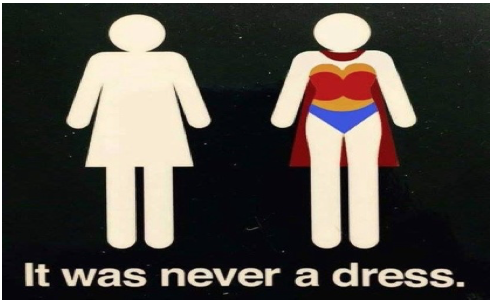 WOMEN’S RIGHTS-If there is one thing that scares the living daylights out of conservative Republicans, it is the rise of strong, intelligent women in politics. They have used every trick in the book to continue to push down women that have progressive political stands and will fight for women’s rights. From cherry picked religious dogma to gerrymandering, women have historically been told that they need to “stay in their place” in the home, kitchen and child rearing. But that time is now done and we have so many women of the past to thank for paving the way to our current time.

Sexism and misogyny in life as well as politics isn’t new, however, it became very obvious during the 2016 Presidential election with Hillary Clinton. From what she wore to the never ending mainstream media Hillary-hate attacks, they refused to focus on her ideas and policies and instead spewed vitriol negativities that were never done to the male candidates. During that time, the media demonstrated that they are no longer a source of “news” but a continual method of ratings chasers. They thought the American people wanted to hear “dirt” and what they ended up doing is pushing the agenda of a known bigot, racist, sexist whose entire platform was based on hate. While Americans seemed to eat this up, there was one thing that the Republican didn’t count on: the push back by women.

Whether you bought into the MSM brainwashing or the Russian and Macedonian purveyors of false news, there is one thing that Hillary Clinton gave to us and that is an image of a strong woman that can compete in the male dominated arena, allowing the criticism to simply roll away; and this terrifies the GOP.

The Trump group have devoted months to installing completely unqualified and anti-women people within the administration. A quick “view” shows almost all white males and this includes the boardroom where they were making decisions on women’s health. The uproar among women of all races, creeds and colors has been so great that women are stepping forward to be embedded in the world of politics at record numbers.

In a CNN article: Trump opened the floodgates. Now Democratic women are running for office in record-breaking numbers, they state:

“920 to more than 19,000 — the number of women contacting Emily’s List about standing for election in the entire 2016 cycle, and just since the election of Trump.

1,800 to more than 15,000 — the average number of annual inquiries to the She Should Run advocacy group, and then the number since the 2016 election

Up 87% — applications to Emerge America training courses for women candidates from 2016 to 2017.

Up 60% — the number of women standing for the Virginia General Assembly next week, compared to the last time all seats were up for election.

51 women from major parties are on the state ballot. 43 women are fighting to represent the Democratic Party in the 100-member Virginia House of Delegates.

And of the 43, 26 are standing in their first-ever public election.”

Female Democrats Are Roaring and Winning

We are experiencing a unique moment in the history of women. We viewed some of the rise of woman-power in the Nov. 2017 “Blue Wave” voting results. Across the country, women of color as well as transgendered women were voted into political offices.

In my article: Democrats Enter With a Blue Wave, Making a Statement in a BIG Way, I include the graph that displays the rise in all Democrats (male and female) that are entering the political platform and it is absolutely historic: 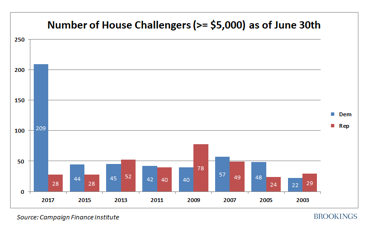 In a different article that I wrote called: No Surprise: Women are the Base of The Anti-Trump Movement, I include a quote:

In a Miami Herald article entitled: Democratic women to Trump: We’re coming for you, they state:

“Democratic women were enraged last year when the woman they hoped would be president lost the election to a man they consider an outright sexist.

The Democratic Party’s top leaders say they think women will be the face of a brewing electoral backlash to President Donald Trump, one that they hope will help win not only majorities in Congress but a multitude of important state and local races across the country.”

“They can’t stop us because this is our moment in history: Not the moment we wanted, but the moment we are called to,” said Elizabeth Warren, a Democratic senator from Massachusetts and possible 2020 presidential candidate. “We will not give up and go home.”

“We’re going to shatter the glass ceiling into so many pieces that the Donald Trumps and Mitch McConnells of the world will never be able to put it back together again.”

The Hill ran a well-crafted article showing just how large the women’s movement in politics is: Women are running for office in record numbers, stating:

“EMILY’s List and She Should Run both report record numbers of interested women considering runs for public office at the state, local and federal levels, according to Axios.

The article continued with:

“She Should Run announced in July that it was launching a national campaign to achieve gender parity among America’s elected officials by the year 2030. That involves galvanizing women to fill 250,000 of the nation’s about 500,000 elected positions, according to the group.”

Harnessing the #MeToo So that It Empowers

Empowerment is the key word that has come out of the #MeToo movement. For the first time in history, women (as well as some men) came forward to expose that extreme amount of sexual harassment, assaults, and attacks that occur in daily life. The sheer numbers of women that stepped forward to join the campaign simply blew everyone’s minds. This was the beginning of the first major step to force the males in the world to recognize that their treatment of women was completely unacceptable.

“In the case of the ‘Me Too’ stand, it was the first time that many women finally felt comfortable telling their stories and the more we listened the more we realized that a huge percentage of the female population have had a shared experience and they are no longer afraid of the typical ridicule or accusations of lying. This time we were showing up together and in numbers far greater than even we thought existed.”

One of the most incredible things about this movement is the number of men that are not only standing with the women, but that are avidly supporting them. Harnessing this energy has been one of the most important elements to allow women in politics to speak up, denounce the sexist regime that has taken over the country and call out the madness.

We are walking a fine line in our history as we are seeing the pendulum swing from one extreme of not believing any accusation that a woman makes regarding sexual assault and harassment to the other side of blind faith belief, no matter what. While neither brings a state of truth and “justice”, we are hoping that the pendulum begins to move towards a center-point that continues the state of empowerment while offering a sense of due process for validation.

What began with the 2017 Women’s March has been escalating with outrage of women from all walks of life, and the #MeToo movement was the most recent crescendo to shove our voices into the faces of the conservatives to let them know that we are no longer going to stand for their male dominated control.

The GOP is embroiled in their own mess with the RussiaGate scandal and they are deathly afraid of the oncoming wave of women in politics that will finally take them down.

The midterms are looming and the Republicans have had long term gerrymandering practices in place to try to address this, but Democrats are stepping up and removing their blockades, one local election at a time.

Be prepared. 2018 will indeed be the year of the woman in politics and we will be seeing women of color as well as all religions taking the stage.

(S. Novi writes on Politics in “Democracy Guardian” on Medium where this article first appeared.) Prepped for CityWatch by Linda Abrams.