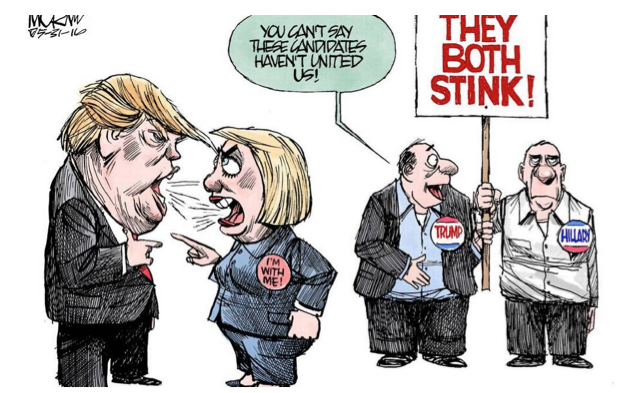 DYSFUNCTIONAL DEMOCRACY-Whether dealing with the human body or the body politic, comparable rules apply. If a threat of sickness and dysfunction is present in either system, look out. Whether it be the normal T-cell immune response to the invasion of the human body by foreign “infections” that cause disease or death if left unchecked, or if it involves the checks and balances immune response built into our Constitution to limit power, both instances involve the dismantling of normally functioning immune system responses.

As science searches for cures for diseases that afflict the human body, it is now concentrating its research on why, at one time, the body can identify, neutralize or eliminate a threat to the body, while at another time, these disease-causing factors are able to overpower the underlying system.

I would argue that the most important factor that allows Donald Trump to infect our body politic is the unbridled power that nullifies the checks and balances built into our government under the U.S. Constitution. The landmark Supreme Court case, Citizens United vs. Federal Elections Commission has given to corporations a blank check. Once they operated at the will of the sovereign but now they are part of a political reality in which the sovereign exists at the will of the corporations. These cancer-like corporate entities have overpowered what should be the normal immune response of the body politic. Their goal is to increase profits at any cost. Isn't such unmoderated growth the classic definition of a cancer?

The founders of our country understood that power corrupts and absolute power corrupts absolutely. So they changed how power wad been handled in the past in a pre-democratic absolute monarchy by creating a system with three branches in order to avoid the abuse of individual rights:

Now that there is no restriction on how much money a corporation can spend on any candidate in any election, prior distinctions between Democrat and Republican and the diverse opinions they represented have lost meaning because all incumbents know that if they do not follow the corporate party line, they will face corporate-financed opponents in their next election. Those opponents will have at least four times as much money to spend on their campaigns that the incumbents have. Not a system designed to nurture the desired haggling process and compromise of a healthy body politic in a functioning democracy.

In the race for president we have come to accept choosing to vote between the lesser of two evils, where the issues that are really of concern to the country, like corporate power, education, and endless war are never discussed and the voter is not given the option of voting for None of the Above as voters can in a parliamentary democracy.

The presidential appointment of ultra-conservative Neil Gorsuch to the U.S. Supreme Court and the likely further packing of the judiciary and other branches of government by Trump with an ultra-conservative majority might assure that anything challenging the corporate profit-at-any-cost agenda will never be challenged.

Furthermore, if all three branches of government at the federal and state levels have no problem denying science by using alternative facts, creating an environment that encourages the destruction of public education (to stop the formation of a knowledgeable electorate,) the gerrymandering of the electorate to fix election results, and the general preferential treatment given corporate interests, then it will be difficult to challenge them in a meaningful way.

In a corporate dominated reality where the word “progressive” no longer applies to Democrats and Republicans (who once worked together to hammer out pragmatic syntheses of ideas for the common good,) it is not surprising that the Trump disease now afflicts our body politic. What is hard to understand is why liberals still believe that Hillary Clinton who took millions from the banks and Wall Street would have been the lesser of two evils. Arguably, an obnoxious Trump is more likely than a corporate-business-as-usual Clinton to finally inspire actions of meaningful defiance that can no longer be ignored by corporate interests with impunity.