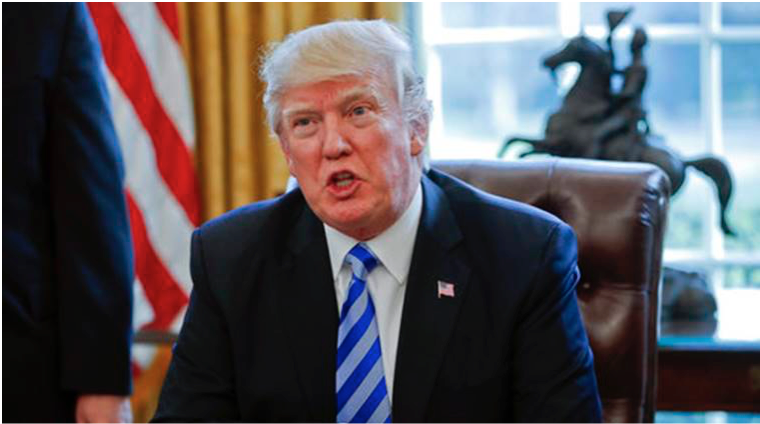 THE COHEN COLUMN-The Washington Post is reporting that our blabbermouth-in-chief just spilled some of our tippy top secrets to the Russians, security material so sensitive it is incredibly closely held even among people in our government with the highest classified clearances.

And Trump did it, in one of his infamous off-script derangements, just so he could brag to the Russian foreign minister and ambassador about all the great intelligence he was getting. Our top intelligence

Trump MUST be told immediately: "You're fired."

The Republicans in general, and Trump in particular, were stampeding in hysteria last fall because there were a couple (as in three) emails on Clinton's private server with the lowest possible classified designation. What they were, in fact, were Clinton's own appointment schedules, which automatically declassify the instant the meetings were over.

But to listen to the Chicken Shit Littles in the Trump surrogate camp, her handling of her emails was the biggest security breach of all time in the history of the Nation and categorically disqualified her as unfit for the highest office of the land. They thought people would die in mass terrorist murders as a consequence if Clinton's server had been hacked -- which NEVER happened because it was well secured with an expert server geek on duty to protect it.

With the new White House resident, no hacking is required. Trump will just freely blab his brains out with our most sensitive top code word secrets like he's trying to impress a girl. Just like that.

This gives a new twist to one of his favorite crutch phrases, "That I can tell you."

The same shameless hypocrisy was also on parade this last week when Trump claimed F.B.I. Director Comey had cleared him (which Comey did not do) after Trump said he solicited information about the state of any investigation of himself personally.

Oh, but President Bill Clinton, while waiting on the tarmac at the Phoenix Airport last year can't talk grand-kids and golf with then Attorney General Loretta Lynch, in what both sides said was an unplanned encounter, without it being the most sinister obstruction of justice ever.

The calls for investigation and innuendo on that was so thick you couldn't cut it with a Japanese Katana sword.

Give us a break.

Careless? That was the worst accusation against Clinton?

Then what shall we call Trump’s recklessly criminal negligence with top, top, tippy top secret stuff that actually matters? We call it, Trump, "You're fired."

f anybody else in the government had done what Trump did they'd be behind bars right now.

Lock her up, indeed. Lock him up and throw away the damn key, preferably with him attached to it.

Senator Mitch McConnell said about the latest Trump f&%k up: “I think we could do with a little less drama from the White House...”

What We the People could use is a lot less Republican in the White House, especially when a memo by former F.B.I Director Comey memorializing a meeting with Trump -- a meeting in which it is understood that Attorney General Jeff Sessions, who himself had failed to disclose his meetings with Russia's ambassador last year and, even though he is the F.B.I. Director's boss, was not invited to participate -- revealed that Trump talked about the ongoing investigation of a large Trump donor in a manner that may have more than suggested to Comey that he should be nice.
Nate Silver, when asked if Trump's problems have hit a breaking point, said, “I mean…what is there to say? It’s really bad news for Trump that Comey has seemingly created an extensive paper trail of their conversations. This is the sort of thing that would be the basis for impeachment. And at a minimum, the drip-drip-drip of leaks from Comey, and other people in the intelligence community, is going to create a lot of ‘distractions’ for Trump from his ability to pass his agenda."

But some Republicans who still have the Spirit of ’76 (an aversion to Kings and Tyrants) in their blood are coming around and want an investigation.

Under Republican command, the integrity of and faith in our government have been sliced into the rough.

Obstruction of justice is for all Americans an obstruction of our collective gastrointestinal tract. And to flush it out requires nothing more than taking a dump of the trump.

Trump is a man-child, silver spooned, a privileged narcissistic and serial manipulator -- and did I not mention serial liar? -- has in some 120 days done more damage to the soul of the United States of America than any of our enemies could have aspired to.

In the legal system, when a case is dismissed with prejudice it means it cannot be brought again.

I say to Trump: “You’re fired! With prejudice.”