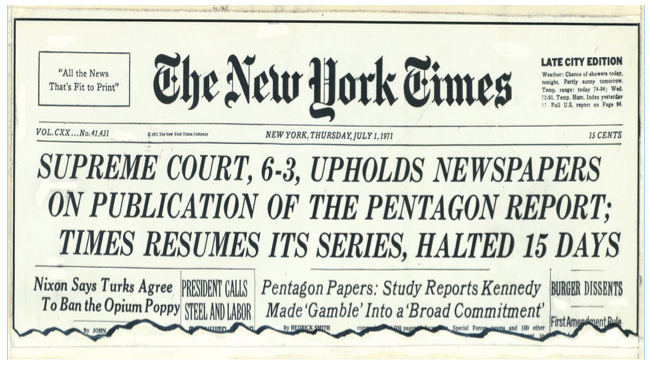 THE PREVEN REPORT--The publication of the Pentagon Papers on June 13, 1971 is often cited as the newspaper industry's finest moment.  And the hero of that moment is, by almost every account, Arthur Ochs "Punch" Sulzberger, then publisher of the New York Times, who made the decision to print the leaked documents despite the sternest of warnings from the Times' longstanding outside law firm.

With the press under siege now, Sulzberger’s heroism takes on special significance—especially if you understand the not widely known context of his decision.

For a year and a half, Daniel Ellsberg, the Pentagon consultant who leaked the 7000 page document, had been trying to make those papers public; in particular, he had approached several prominent members of Congress, including William Fulbright, George McGovern, Charles Mathias, and Pete McCloskey, pointing out that those men would have immunity from prosecution because of the Speech or Debate Clause of the Constitution. By putting the Pentagon Papers into the Congressional record, those elected officials would have insured that the papers could not be locked away unseen.

And yet despite their anticipated immunity, not one of the Congressmen approached by Ellsberg was willing to take the risk.

Sulzberger’s decision to publish, by contrast, was made with the full knowledge that he would not have any of the immunities just described. And he was told by his outside lawyers in no uncertain terms that he could very well go to prison for choosing to publish. To print the papers, they warned, could be construed as treasonous and would in any case be unpatriotic and irrevocably defaming of the paper.

All this faced by a man who had assumed the leadership role at the Times unexpectedly and at a point when no one believed he was ready. He was just 36 years old, making him the youngest New York Times publisher in that paper's history.  He had also been under attack in some circles for extending the paper into commercial enterprises such as more casual sections having to do with things like fashion.

Sulzberger took several days to consider the decision—his editor in chief Abe Rosenthal threatening to resign if the papers weren’t published—but in the end he made his famous choice, and not just to publish but to do so on the front page, where the documents' impact was predictably powerful, leading to demonstrations in the streets against the war.

This was not a time when those decisions were made lightly. The press at that stage was far more trusting and compliant with government, generally deferring to their authority.

Just hours after the Pentagon Papers were printed on June 13, 1971,  President Nixon, in a telephone call with Henry Kissinger, expressed amazement at the boldness of Sulzberger’s decision.

''My God,'' the president said, ''can you imagine The New York Times doing a thing like this 10 years ago?” Kissinger couldn’t. Nor could the rest of the free world. Nor perhaps could Sulzberger himself. But he did it. And that’s what counts.