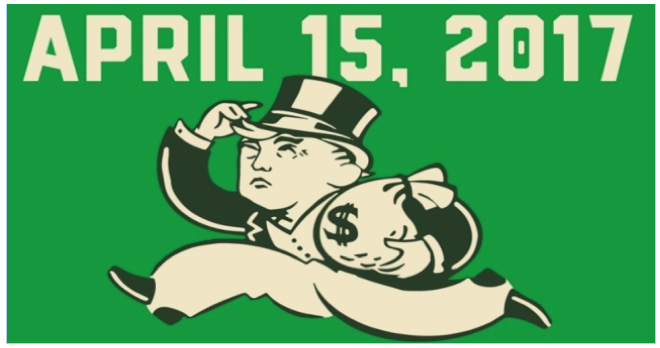 GUEST WORDS--On Saturday, Americans protested in the streets of Washington, D.C. and more than 100 other cities as part of Tax Day. Demonstrators called on President Donald Trump to release his tax returns so the public can see if his global business interests include any conflicts of interest, including financial ties to Russia and other foreign countries. They also be raised their voices about Trump’s tax and other policies that favor the super-rich at the expense of the middle class and the poor.

They know that if Trump were forced to release his tax returns, it could single-handedly undermine his presidency and perhaps even set the stage for his impeachment.

A broad coalition of activists -- which includes the leaders of the January women’s marches that galvanized five million people in cities across the country, MoveOn.org, the American Federation of Teachers, the Indivisible Project (which has inspired more than 7,000 local groups to organize, including protests at local town halls sponsored by members of Congress,) Americans For Tax Fairness, the Center for Popular Democracy (a network of local community organizing groups,) and Our Revolution (the organization built from Bernie Sanders’s presidential campaign) -- sponsored the Tax Day events. In Washington, D.C. they walked from the U.S. Capitol to the White House, passing both Trump’s hotel and the IRS building.

During and after his campaign, Trump pledged to release his tax returns as soon as the Internal Revenue Service was done auditing him. Then he recanted, claiming that Americans don’t care about the issue.

In fact, Americans do care. A poll conducted by ABC News/Washington Post in January found that 74% of people surveyed and 49% of those who voted for Trump said the president should release his returns. A more recent poll, conducted last week by Global Strategy Group for MoveOn.org, found that 80% of Americans – including 64% of Republicans, want Trump to release his tax returns.

By the end of February, more than one million people had signed a petition on the White House website, launched on Inauguration Day, to “immediately release Donald Trump’s full tax returns, with all information needed to verify emoluments clause compliance.” It was by far the largest number of names on a White House petition, surpassing a 2012 petition to recognize the Westboro Baptist Church as a hate group, with more than 387,000 signatures.

Voters are also wary that Trump’s tax plan includes provisions that will further enrich him and others like him by reducing taxes for super-wealthy while raising taxes on the middle class and the poor. As the New York Times recently revealed, when one of Trump’s advisors proposed a tax change that would make it harder for real estate developers to use mountains of debt to make deals, Trump killed it. Last month, MSNBC host Rachel Maddow obtained two pages of Trump’s 2005 tax return that showed that he paid $31 million as a result of the alternative minimum tax that year. Trump has called for the elimination of that tax rule, which would save him tens of millions of dollars in tax payments a year.

"I think he just has an obligation to come clean,” Senator Charles Schumer (D-NY), the Senate minority leader, recently said. “When you clean up the swamp, it's not keeping things secret and it applies to yourself."

“The American people want to see what this is about,” Senator Ron Wyden, the ranking Democrat on the Senate Finance Committee, told the New York Times about Trump’s proposals to revise the federal tax code. “Are our interests being protected or are these deals that somehow promote his interests?”

Rep. Hakeem Jeffries (D-NY) has even said that Congress should delay making any changes to the tax code until Trump releases his tax returns so lawmakers can see how revisions might directly benefit him.

Every major party nominee since Richard Nixon has done so except Gerald Ford, who released a summary.

Americans want to know: What is Trump hiding?

First, Trump’s tax returns could reveal the extent of his global business dealings and entanglements, including potential conflicts of interest that violate the Constitution’s Emoluments Clause, which forbids presidents from accepting payments from foreign governments. In particular, Trump’s returns could tell us quite a bit about his ties to Russian entities and banks. Trump was required to file financial disclosure forms that revealed that he has a stake in or owns 564 businesses, corporations, limited partnerships, or limited liability companies around the world. Many of his businesses work in or with foreign countries, including Russia. Some of Trump’s business partners might be close to Putin. His tax returns might show that he’s making payments on loans from foreign banks who have invested in his businesses.

“Until we see his taxes, we don’t know how much money he owes Russia, China, and other countries,” said Ben Wikler, Washington director of MoveOn, one of the groups sponsoring the Tax Day marches.

Second, Trump’s tax returns might reveal that he isn’t as wealthy as he has claimed. During the campaign, one of Trump’s biggest arguments was that as a successful businessman, he could fix the nation’s economy and stem the exodus of jobs. As evidence of his business acumen, Trump claimed to be worth $10 billion. But Forbes magazine put the figure at $4.1 billion. Trump’s tax returns might show that even that number is a wild exaggeration, that he’s mired in debt, and that the number of his businesses that have gone bankrupt is even more than the six we already know about. (Despite this, on April 18, 2015, Trump tweeted this falsehood: “For all of the haters and losers out there sorry, I never went Bankrupt.”)

Third, the tax returns might reveal that Trump has paid little -- and in some years, nothing -- in federal income taxes. If there’s one thing that most Americans agree on it is that the super-rich should pay their fair share of taxes. In October, the New York Times obtained and released Trump’s 1995 tax records, which revealed that he claimed a $916 million loss that could have permitted him to avoid paying federal income taxes for up to 18 years. The losses stem from major business failures, including his mismanagement of three Atlantic City casinos, the financial crash landing that was Trump Airlines, and his bungled purchase of the Plaza Hotel in Manhattan.

Last month MSNBC’s Maddow revealed that Trump paid a 25 percent effective tax rate in 2005. Some observers speculated that Trump had himself directly leaked those two pages to Trump critic and investigative reporter David Cay Johnston (who provided them to Maddow) because it was one year that he did, indeed, pay taxes. But we still haven’t seen his tax returns for the past 11 years, which could show something completely different.

In a debate last September, Hillary Clinton scoffed at Trump’s failure to release his tax returns, suggesting that he may be hiding the fact that he paid nothing in federal taxes. “That makes me smart,” Trump responded. In Trump’s logic, if a wealthy mogul with a good accountant can exploit tax loopholes created to help the super-rich avoid paying taxes, he has a moral obligation to take advantage of them. Trump didn’t mention that while enriching himself by paying little or no federal taxes, he stiffed scores of unpaid contractors and bondholders on his casinos.

Fourth, the tax returns might reveal that Trump gives little or no money to charity. Trump has long boasted that he’s a generous philanthropist. He often showed up at star-studded charity events to demonstrate his do-gooderism. On the same day that Trump announced he was running for president, he released a 93-page list of his charitable donations. The list included 4,844 individual gifts that totaled $102 million. Washington Post reporter David Fahrenthold spent months trying to confirm Trump’s claims. He called more than 420 charities on Trump’s list. Only one group, the Police Athletic League of New York City, said that it had received a donation from Trump -- and that one was for less than $10,000.

Fahrenthold discovered that even the Trump Foundation, supposedly created as a vehicle for Trump’s charitable giving, is mostly a scam. Trump has given only $5.5 million to his own foundation and nothing since 2008. Meanwhile, Trump enticed others to contribute $9.3 million to the foundation. This helps Trump look like a generous donor without spending his own money.

Moreover, Trump has illegally used the Trump Foundation for his own business purposes, a clear violation of federal tax laws against self-dealing. For example, his foundation’s largest gift --$264,631 -- was used to renovate a fountain outside the windows of Trump’s Plaza Hotel, hardly a charitable cause. In 2007, he used the foundation to buy a six-foot-tall painting of himself, for $20,000, which wound up hanging on a wall in Trump’s private golf club in Briarcliff Manor, New York. Trump has also used his foundation’s funds to settle legal disputes involving his for-profit companies, another violation of federal tax laws.

But the full extent of Trump’s stinginess can’t be known without reviewing his tax returns, because donors are required to itemize their tax-exempt charitable donations on their annual IRS forms.

If Trump won’t voluntarily release his taxes, what can be done to allow the American people to see them?

Congress has the authority to obtain Trump’s taxes under a complex statute in the Internal Revenue Code, Section 6103, which allows three congressional committees to obtain private tax information from the IRS in order to investigate presidential conflicts of interest. The committee can then vote on whether to disclose the information to the public.

If the Democrats win a majority in either the House or Senate next year, they could vote to obtain Trump’s returns. They could also pass a law requiring that all presidents release their tax records, though it is unlikely Trump would sign it.

Trump’s tax records could be made public as a result of a lawsuit filed in New York by a team of constitutional scholars alleging that Trump is in violation of the emoluments clause. The legal team intends to ask for Trump’s returns in order to ascertain what income, loans or other payments he has received from foreign governments. The courts must first rule on whether the group has standing to file the suit.

The records could also be made public if attorneys general in states where Trump has business dealings were to sue him for violating the emoluments clause, as Fordham University Law School Professor Jed Schugerman recently argued. Such suits could give a state attorney general access to the returns, which could then be provided to a congressional committee under 6103.

There is also the possibility that a member of the IRS staff or someone within Trump’s own operation would leak his tax returns, either to the media or to Congress, just as Daniel Ellsberg helped to bring down Richard Nixon by releasing the secret Pentagon Papers to the New York Times in 1971.

Any leaker would need to believe that Trump’s tax returns are so damaging that bringing him down would serve a higher purpose -- would, say, protect our democracy from a president with little respect for the Constitution, the separation of powers and the rule of law. The number of people who share this belief grows every day.

(Peter Dreier is E.P. Clapp Distinguished Professor of Politics, and chair of the Urban & Environmental Policy Department, at Occidental College. He writes regularly for the Los Angeles Times, Common Dreams, The Nation, Huffington Post and contributes occasionally to CityWatch. This piece appeared in CommonDreams.org. Edited for CityWatch by Linda Abrams.