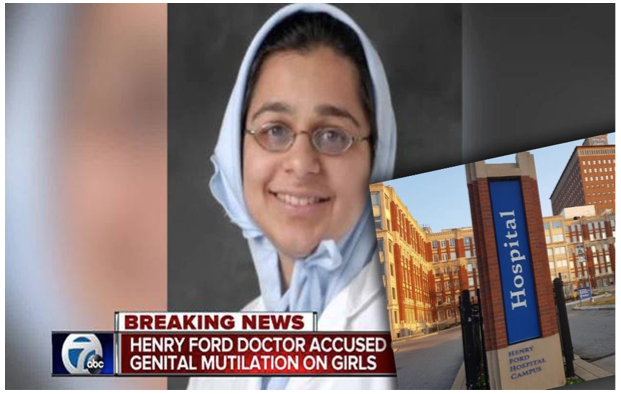 HEALTH POLITICS--Sometimes the positioning of a story is a story in and of itself.  Take, for example, the nightmarish story of a doctor who was just arrested for performing female genital surgery on two young, innocent American girls.

Why this story didn't receive the media attention and prioritization that the United Airlines passenger beat-down and drag-out just did should concern us all.

CNN (a liberal news site) and Breitbart (a conservative op-ed site) and all the local media outlets such as Channel 5, NBC, and ABC covered this story, but one had to dig deep to get it on the Huffington Post website. The front web pages of the Yahoo, AOL, and MSN websites didn't have it at all.

Trust me, I checked.  And even did a check at Snopes to confirm I wasn't paranoid when I saw such an uneven coverage of this issue.

I'm aware that the media will cover--and not cover--all sorts of issues, such as First Lady Melania Trump's visit to a home for abused girls in Lake Worth, Florida on Good Friday.

And for good reason, the media itself is under fire after losing the trust of many Americans for decades, with the ultimate result being the election of President Donald Trump.

Arguably, the reason for Trump's doing business at Mar-a-Lago and Trump Tower (and yes, the expense is a big, BIG problematic issue) is to escape the Washington/media insider elites and do business in private.

But the issue of female genital circumcision, which in this nation (and throughout the civilized world) is described as female genital mutilation, is one that is fraught with politically-correct nonsense.

So let's make something clear:  there is NO medical benefit for females to have their genitals altered, and this procedure is NOT the same as male circumcision.

In male circumcision, the foreskin is removed and the penis is left otherwise untouched: while not medically necessary for all males, a host of potential medical benefits ranging from prevention of urinary tract infections to the ability to achieve erection or normal urination later on in life is well-documented.

An army of dermatologists, urologists, pediatricians and others would argue that, when properly performed by a trained professional, male circumcision (which is NOT the same as removal of the penis) is a valid and beneficial medical procedure ... and is much more easily tolerated and recovered from by infants who will have normal, healthy lives (including sexual lives).

No such evidence exists for female genital circumcision, where removal of part or all of the functional clitoris is performed.

The Muslim medical community must come out loud and strong, as should we all, in condemning and not tolerating this practice--and condemn the doctor who (rightfully) was just arrested.

The potential of performing a small and harmless (and sterile) pinprick of the genital region of a baby girl might be something to be considered--thereby allowing cultural sensitivity of those communities involved while preventing ANY long-term harm to affected girls and women ... but that is an issue for the Islamic communities of this nation and world to decide.

And therefore the politically-correct nonsense of covering up, or burying, a legitimate concern to our nation is indefensible and should be opposed by liberals and conservatives alike who defend the rights of girls and women everywhere.

Sometimes the positioning of a story is a story in and of itself.

(Kenneth S. Alpern, M.D. is a dermatologist who has served in clinics in Los Angeles, Orange, and Riverside Counties. He is also a Westside Village Zone Director and Board member of the Mar Vista Community Council (MVCC), previously co-chaired its Planning and Outreach Committees, and currently is Co-Chair of its MVCC Transportation/Infrastructure Committee. He was co-chair of the CD11 Transportation Advisory Committee and chaired the nonprofit Transit Coalition, and can be reached at alpern@marvista.org. He also co-chairs the grassroots Friends of the Green Line at www.fogl.us. The views expressed in this article are solely those of Dr. Alpern.)