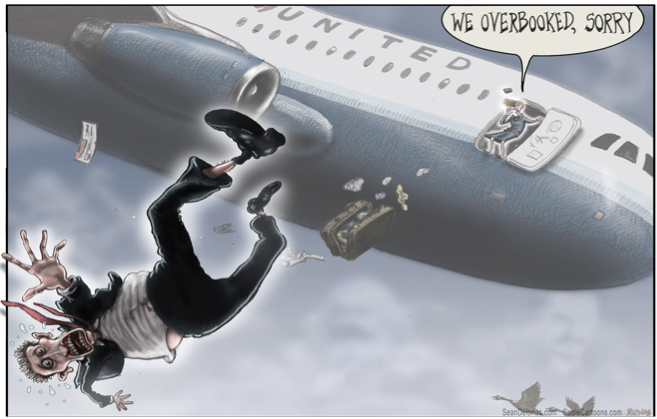 PERSPECTIVE--Do you remember this gem of a commercial from the 1980s?

It was one of an entertaining series produced by Alaska Airlines, parodying the gap between promises of superior customer service and actual delivery.

Good news for United – they will not have to pay a dime for advertising for a while. There’s plenty of free video available and, unlike the poor chap in the Alaska commercial who at least had a seat, passenger David Dao couldn’t keep his.

But he did receive priority deboarding.

As a frequent flyer, I have endured my share of shoddy service but, quite often, it has been more than balanced with exemplary acts of kindness by airline personnel, both on and off the plane, from the cockpit to the reservation agents and the skycaps.

I am sure the vast majority of United’s rank and file personnel were appalled by this incident, but they have to zip it up lest they face the wrath of CEO Oscar Muñoz and get dragged down the proverbial aisle of retribution.

The airline industry is as complex as it gets, but that fact is often used as tool to bamboozle the public and obfuscate poor management practices.  United and other airlines have been flying for more than half a century and have accumulated a wealth of knowledge about scheduling, matching passenger loads with routes and assigning crews to flights.

When customer service goes awry, airlines’ management just shrug it off as de rigueur of the environment.

If industry CEOs learned from experience and applied fixes, the process of bumping would not be as widespread as it is today.

Airlines bumped 40,000 passengers, not including 434,000 who voluntarily relinquished their seats. Statistics for 2015 show about 895 million passengers were carried on domestic routes. So the number of inconvenienced passengers is a mere fraction of the total.

That’s good, but it is a lottery you do not want to win, especially if you are on a tight schedule.  What’s more, bumping creates delays for all passengers and causes some to miss connections.

The root cause, overbooking, is necessary because of passenger cancellations, according to the industry. Airlines risk losing revenue if they cannot fill seats left vacant by no-shows. But what they fail to admit is the windfall they make off of baggage fees, amounting to $3.8 billion for domestic carriers in 2015.  One study cited by Fortune Magazine estimated close to $11 billion for a la carte fees overall.

The disparity between the two seems inexplicable, but it is a staggering amount no matter what.

Do you think some of this money could be used to offset lost revenue from late cancellations, thereby reducing the need for overbooking? How about some for better comfort?

The public might be more forgiving of mismanagement if they had something in return thrown their way … and not just a bag of peanuts.

We are likely to face pay lavatories and other abuse, as depicted in other vintage Alaska commercials, before the airlines show some respect to the people who allow them to exist – the passengers.