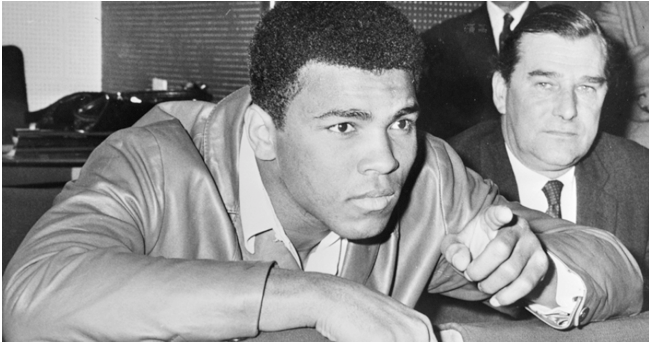 EDITOR’S PICK--Reaction to the death of Muhammad Ali this weekend was reverential, and why not? As obituaries explained at great length, Ali was more than just a great boxer. He was a “civil rights activist,” a “champion of free speech,” a “humanitarian,” a “tireless human rights ambassador and philanthropist” known for “gentle generosity.”

Reading this, one might imagine that Ali lived the kind of life that made everyone admire him. The truth is quite opposite. During the prime of his life, Ali was widely hated. Politicians and news commentators denounced him as a cowardly, anti-American traitor. The legislature of his home state, Kentucky, passed a resolution declaring that he had brought discredit to the state and to “thousands who gave their lives for this country.” Even other African-American athletes, including Joe Louis and Jackie Robinson, criticized him.

This is a wonderful lesson in the way we whitewash figures who harshly criticize America’s conduct in the world. While they live and speak, we abhor them. Years later, when they are conveniently gone, we forget the ferocity of their words and pretend they were part of America’s happy family.

If Ali was a gentle giant beloved by all, he symbolizes our goodness and the unity of our society. Yet he was much more than that. Ali sacrificed years at the peak of his career because he hated what his country was doing to nonwhite people far away. As he was about to enter prison for refusing induction into the Army, he explained his motive: “My conscience won’t let me go shoot my brother, or some darker people, some poor, hungry people in the mud, for big powerful America.”

Ali believed it was wrong and even sinful for the United States to bomb faraway lands because their people or leaders do not behave as we wish. His message is every bit as urgent today as it was when he first began preaching it. Yet in the fawning coverage that has followed his death, Ali comes across as a friendly grandpa rather than a passionate critic of American foreign policy.

His case is hardly unique. Not long before Ali died, much publicity was given to the death of another relentless advocate of peace, the Rev. Daniel Berrigan. Like Ali, Berrigan was jailed for actions that stemmed from his antimilitarist convictions. At one protest, he denounced “the Catholic Church, other Christian bodies, and the synagogues of America, with their silence and cowardice in the face of our country’s crimes.” Obituaries did not ignore his activism — they could not, since it was the center of his life — but many portrayed him as an eccentric oddball and suggested that he would be remembered for his poetry and “wry wit.”

Martin Luther King Jr. has suffered the same fate. Today he is an icon, universally revered, and even honored with a statue on the Washington Mall. Most of us have come to share his belief that African-Americans deserve civil rights. We congratulate ourselves for having heeded his antiracist message.

That was not, however, King’s only message. He detested what he called “smooth patriotism,” and was horrified by the American compulsion to bomb, invade, and occupy countries on other continents. “We increased our troop commitments in support of governments which were singularly corrupt, inept, and without popular support,” he said in one speech. “People read our leaflets and received the regular promises of peace and democracy and land reform. Now they languish under our bombs.”

Statements like that led the director of the FBI to call King “the most dangerous man in America,” all but begging some misguided patriot to kill him. We forget this essential part of King’s message because it applies too directly to the foreign policy we follow today.

Activists of earlier generations have suffered the same fate. Radicals from Thoreau to Paul Robeson to Malcolm X now appear on US postage stamps. Mark Twain is remembered as a folksy humorist partly because his vivid denunciations of American intervention are absent from most anthologies.

Few today realize that Twain opposed sending “our clean young men to shoulder a discredited musket and do bandit’s work,” that he believed foreign wars had “debauched America’s honor,” or that he proposed a new American flag “with the white stripes painted black and the stars replaced by the skull and cross-bones.”

Americans who want our country to change the way it acts in the world often feel that we are blazing a new trail. We are not. The idea that the US harms itself and others, by considering itself “indispensable,” and by trying to “shape” the politics and culture of faraway countries, was not recently invented. It is as American as apple pie. Yet those who have preached this gospel are either forgotten or — even worse — portrayed after death as friendly folks who may have spoken an intemperate word or two but in their hearts loved everything America is and does. Muhammad Ali is the latest to suffer this indignity. We do him, and others who share his antiwar passion, a disservice when we forget crucial aspects of their political identities.