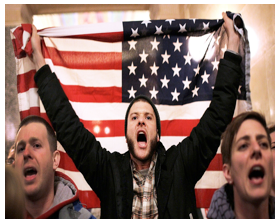 FEARLESS FORCAST--While crises are nothing to cheer about (except for those bottomfeeders who choose to exploit them for personal vendettas or even economic betterment), it appears that 2016 will finally bring about the culmination of bottled-up tensions that have been worsening for approximately 15 years.  And yes, that matches the timeline that began with the crises of the Bush/Gore election and 9/11, and extends to our present day.

Whether it has roots in the crises brought to our shores and communities (foreign or domestic terrorism) or the red/blue divide furthered either by the Karl Rove gang or the "let no crisis go to waste" gang, our nation is more divided than ever, with income inequality and political/economic empowerment disenfranchising increasing majorities of American subcultures--and inflaming groups of Americans against Americans.

I frankly wonder (but am oh-so-grateful) that there hasn't been violence in the streets. Perhaps there IS something good about reality TV and Internet distractions, in that they have numbed and distracted us from the decreasing quality of life that is part of our modern American era.

But the Trump/Sanders Phenomena is NOT borne out of a mere coincidence--and neither are the Tea Party and Occupy Movements.  Even if they're not talking to each other, the peaceful-but-still-angry Americans behind those phenomena and movements still have the rough elements of "I've had it and I won't take it anymore" in common:

1) Trump has moved forward with embracing the anger of Americans, while Sanders arguably hurt himself by taking the high road.  The GOP is jettisoning its Bush elite family past--despite the Republican establishment's frenzied and cash-soaked attempts to retain Jeb Bush as the annointed Republican frontrunner, but the Democratic Party establishment's embracement of the Clinton elite family might hurt that party in 2016.

Trump's poll numbers go up, while Sanders, who has been a gentleman in the debates and in his campaigning, have gone down.  Perhaps Sanders is getting savvy with attacking the DNC who is shoving him aside with respect to voter data access but if he doesn't take off the boxing gloves soon, he might just realize that nice guys sometimes finish last.

Why the need to embrace the anger of ordinary Americans?  Well, it's what we all learn with respect to Customer Service 101:  when a customer is angry (in this case, the average Joe or Jane American), it's kind, empathetic and smart to acknowledge, verify and support that customer's feelings.

Both Trump and Sanders are getting virtually all their campaign money from small, average Americans, while the opposite is true for both the Jeb Bush and Hillary Clinton campaigns.  Wall Street and the 1% are without a doubt supplying most of the funding of Mr. Bush and Ms. Clinton.

And as former Democratic candidate Jim Webb starts getting his own ire up, and weighs a run as an Independent, it's probably not hard to conclude that there are more than a few pro-woman Democrats who wished Elizabeth Warren had thrown her hat into the ring.

And perhaps Bernie Sanders will reconsider how nice he should be to his opponent...presuming, of course, he truly wants to win the Democratic nomination for the 2016 Presidential Election.

At least voters have been appeased by seeing Bush being thrown out of the frontrunner status into the "waiting to step down status"...but there is no appeasement with respect to seeing Hillary Clinton "get hers" the way Bush "got his".

2) Many--arguably MOST--Americans truly have a "I'm mad as hell, and I'm not going to take this anymore!" frame of mind.  Wages are stagnant if not falling, law-abiding and honorable Americans too often appear to lose out to the inscrupulous elites, and our nation's fabric is as tattered as ever.

Whether it's Howard Beale from the movie Network, of Howard Jarvis, author of California's famous Proposition 13 taxpayer revolt, we're having a "Howard" moment.

And if there are those of you who wish we'd heard more of Sanders, and less of Trump, it might give you pause and relief to know that when Bernie Sanders weighed in on wages being too low, Donald Trump did something we rarely see:  he backtracked and clarified that wages and middle-class job opportunities are too low.

In other words, we do need to hear more from Bernie Sanders (whether you agree with his socialist conclusions, he does have a few solid on-point proclamations we need to hear), and it's interesting to know that he has The Donald's ear.  It's also interesting to know that Trump and Sanders share a few key perspectives, and that they both feel that average hard-working Americans are being rewarded increasingly less for their toils.

3) Then there's another target for Americans anger:  The Press, who have obfuscated and distracted and confused and spun the news to the point that the average American has a hard time knowing who to trust.  And don't worry about "Fox News" (or "Faux News", as some call it), because Donald Trump and Fox News hate each other as well.

The revolving door of the largest media institutions (often referred to as the "Mainstream Media") and the White House is slowly dawning on the American public, or at least their mutual and horrible love affair, and it's why Trump's poll numbers go up after each media attack (deserved or not), because while Americans might be leery of Donald Trump, they absolutely HATE the Press.

And when CNN's Don Lemon got frustrated and angry that his guest didn't decry Donald Trump's recent remarks about Hillary Clinton, because the guest was more focused and disgusted about the Clinton family's history of abusing and belittling women who were mistreated and exploited, it's almost certain that when Don Lemon cut his segment short that it was NOT the guest who "lost" the battle...it was Don Lemon.

To be sure, there are those who wonder about all this anger, but they're probably the ones who ignore the harsh, hideous reality that the Great Recession of 2007-09 did NOT end, but rather morphed into the Second Great Depression that we are still miserably slogging through.  Maybe the ones who think things are "juuuust fine" and "juuuuust great" are economically or politically favored right now, but they're in the minority.

Because it's only the Press, and those who still trust it, who think things are actually getting much better.

Because when the general election cycle starts after primary season ends, there will be no shortage of ordinary, otherwise tolerant Americans, including Democrats--many of them pro-union--who realize that private sector jobs and opportunities are being smashed while the public sector appears too coddled...and at the expense of the overwhelming majority of taxpayers.

Because when the general election cycle starts after primary season ends, there will be no shortage of ordinary, otherwise tolerant Americans who won't tolerate the "blame Bush"  message anymore, and will want answers to the complicated relationship Americans have with domestic and foreign Muslims In 2016, there will be many, perhaps most, Americans who hate BOTH Bush And Obama.

Because when the general election cycle starts after primary season ends, there will be no shortage of ordinary, otherwise tolerant Americans who will raise the cry of exactly when the rights of foreign refugees end, and when the rights of American citizens who will pay for them begin Even the Obama. Administration is starting to expel migrants (who we used to call "illegal" because they were not entering this country legally, and were breaking the law).

Because when the general election cycle starts after primary season ends, there will be no shortage of ordinary, otherwise tolerant Americans who will wonder why--particularly for those who remember former President Richard Nixon's lawbreaking and wiretapping tendencies with outrage and disgust--our President and his NSA are so prone to spying on our friends, and now even on Congress.

1) If there's a silver lining in the cloud hanging over the heads of those who fear a President Trump being elected in 2016, perhaps it's that Donald Trump's political past is NOT with the GOP and NOT with the Democratic Party. It's with the Reform Party of Ross Perot, and the idea of voting "none of the above" appears to actually have a chance of occurring this election cycle (for good or for ill).

2) But doubt not that anger exists aplenty in our nation, and that it will boil over politically next year.  Whether that anger leads to a new, decades-overdue call for reform that actually happens...is a question that will be answered only in 2017.

(Ken Alpern is a Westside Village Zone Director and Board member of the Mar Vista Community Council (MVCC), previously co-chaired its Planning and Outreach Committees, and currently is Co-Chair of its MVCC Transportation/Infrastructure Committee.  He is co-chair of the CD11Transportation Advisory Committee and chairs the nonprofit Transit Coalition, and can be reached at  [email protected].   He also does regular commentary on the Mark Isler Radio Show on AM 870, and co-chairs the grassroots Friends of the Green Line at www.fogl.us. The views expressed in this article are solely those of Mr. Alpern.)