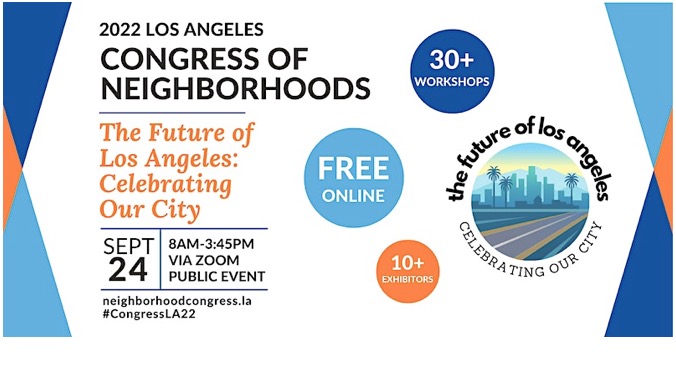 GELFAND’S WORLD - As I mentioned in a previous column, we will be having the annual neighborhood council congress this Saturday, September 24.

It's not just for council members. Anybody with an interest in how your city runs (and sometimes malfunctions) will have an interest. In the opening session (9 AM) you will have a chance to hear from the Mayor, the City Attorney, the Controller, and the president of the City Council. There will be sessions on the urban forest and on what our LAPD senior lead officers do. There will be a session called Celebrate Your Neighborhood's History and Art, and a session on the city's new policy on digital communications (something to make all of us mad).

There will also be several sessions which involve serious griping which we think is timely and well deserved.

As before, let me provide a link to the congress here:

When you click the link, you will find a signup form which gets you a free ticket through Eventbrite. You should be able to sign up anytime including during the congress, but the hard working unpaid volunteers will appreciate you for signing up today or maybe tomorrow.

Once again, here is a link to the schedule:

The original idea of neighborhood councils, going back to City Councilman Joel Wachs, involved the idea that city residents ought to have a chance to talk to their government leaders about issues that are of concern to us. In other words, we need a chance to air our grievances -- everything from the difficulty in connecting to 911 to that pothole that you have been driving over for the past two years. The following session descriptions deal with the problems we have been having in getting through to government -- plus lots of other general griping. Somewhat related to that, and surely of interest to CityWatch readers, is the following:

This is an event we had been talking about for several years, but the Covid pandemic scrambled all of our plans. We are finally getting a chance to start the process. We only have 45 minutes for the session, so we've chosen to invite a selection of writers that many of you seem to like to read. For this first annual session, we have invited Dennis Zine, Tony Butka, Jack Humphreville, Sara Corcoran, CityWatch editor Jim Hampton, Liz Amsden, and your host, Bob Gelfand.

The session will be conducted as a Zoom Meeting, so we're hoping that some of you will be willing and able to ask questions.

Defending Neighborhood Council Independence and Freedom (11:00 to 11:45 AM)

In previous years, the congress tried to avoid controversy, apparently in the misguided belief that if we didn't complain about serious issues, the politicians would like us more. It was somehow expected that this would result in our getting what we wanted. This goes against pretty much everything that is known about how politics and government work, but the congress was reined in quite successfully for years.

More recently, we've found a little room to open our discussions to serious matters, and this session deals with what is probably the most serious we are facing. Right now, DONE is doing the best it can to tell us what to do, how to behave, and why we can't say what we mean. DONE is doing a lot less to help us do what we want to do, which was it's originally defined function. It turns out that a large majority of neighborhood council participants who filled out a recent survey are saying exactly that. We will talk about the survey during part of this session.

We will be talking about the idea of a Neighborhood Council Bill of Rights and/or a negotiated Memorandum of Understanding between the city and our neighborhood councils. We will also be discussing the fact that we have been losing board members because some of them simply got tired of all the useless training requirements.

Liz Amsden decided that we need to have a discussion about the whole idea of mandated training vs making most training voluntary. Also, what sort of training do we really need, and how would it best be delivered?

Hint: Readers of this column know what my views are, but there are other views out there in the neighborhood council universe. Some of us want every neighborhood council board member to be forced to undergo training to make us better people, to respect one another, to never speak crossly, and so forth. This is a bit of a parody of that message, but we'll get to hear it.

Only in California: Otter Takes  Surf Board

Up in Santa Cruz, surfers share the beach with sea otters. So a couple of days ago, when one surfer left his board alone momentarily after finishing a wave, a sea otter climbed onto it and wouldn't give it back. You can see the episode here:  The video goes on for 5 minutes, because that's how long it took to get the board away from the otter. It was quite the standoff till then.

Addendum: An interesting week at the national level

Wednesday was a hard day for Trump and family. In the morning Donald and the kids were sued for fraud in the state of New York. Later the same day he lost in the federal appeals court over the top secret document seizure and his potential criminal liability. The appellate court issued a stay against the ruling by the district court judge which would have required a special master. Trump had already had a hard time of it earlier in the week when the special master -- a senior federal judge himself -- wasn't sympathetic to his legal team's strategies.

And an interesting week at the international level

Over a few days, Ukraine turned the tables on its Russian invaders and took back a significant amount of territory in the northeast. Ukraine spokesmen described the Russians as running away while leaving their tanks an trunks behind. Apparently in response, Putin announced a mobilization and the callup of 300,000 new troops. Depending on your sources, it is suggested that thousands of Russians are fleeing their own country as fast as they can. It's not unlike stories we heard from men who fled their countries during the WWI era to avoid the draft. We also hear that planes leaving Russia are full. In the meanwhile, antiwar protesters in Russia are being drafted.

There's lots going on, to be sure. In their usual Trumpian way, the Russian propagandists are blaming the west (that's us) for threatening the use of nuclear weapons, even though they were brandishing the threat in the early days of the war.

One unlikely possibility, but worth mentioning: Putin could always work out a deal where he checks himself into a Swiss clinic for whatever ails him, buys a home in the mountains, and enjoys whatever life he has left in luxurious peace and quiet. It's happened before. If he is one step ahead of his replacement, he could try.