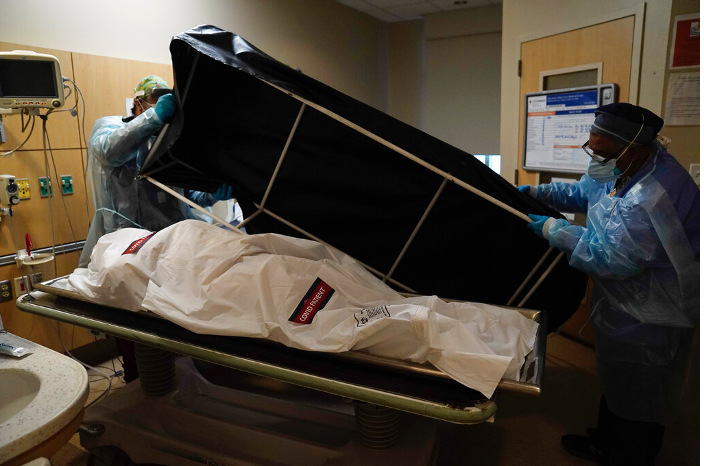 GELFAND’S WORLD - It's suddenly become the most common cliche on television or the internet. We are presented with a sick -- most likely dying -- man in a hospital bed or perhaps a wheelchair, and some sonorous announcer asks him if he regrets not getting the Covid-19 vaccine.

About nine times out of ten (for there are now a lot of these men) he says he does regret it. Sometimes he even advises other people to get the vaccine right now, before it is too late.

A few of these interviews take the questioning one step further, and this is where you might learn something. The victim is asked why he avoided getting the shot.

So here is what one patient said just a few hours ago: "I wasn't convinced that the vaccine was safer than its long-term effects." In other words, this man, who was monstrously ill, someone who was having trouble maintaining enough oxygen flow into his lungs to continue his needed life functions, had been led to doubt whether he should invest the fifteen minutes necessary to prevent getting this likely-fatal disease.

And his reticence arose out of some thinly founded doubt that clearly and obviously had not developed from half a lifetime of serious study in the classroom or in a medical college. If he had founded his judgment on such studies, he at least would have had enough background to recognize the difference between a one in a million chance of a vaccine side effect vs. a thousand times higher risk of dying from the disease.

There is one more point which is critically important. This patient may have been told that the vaccine might render him sterile, or dead, or incapacitated. In more extreme scenarios, he might even have been told that the vaccine would include a microchip that would carry some mysterious, undefined power that could be used against him. Most of us joke about these claims, but they are out there.

Or the dying patient might have been told that the vaccine has all kinds of mysterious ingredients starting with formaldehyde and progressing to human embryonic cell extracts and visiting some derivative of glycerol along the way.

And these bogus claims, curiously enough, are really the crux of the matter. Our deathly ill patient -- now wishing that he had taken the vaccine -- fell for the whole mess of propaganda. He bought into a gestalt that involves rejection of medical scientists who happen to get paid by the government, rejection of the idea of global warming, and a whole lot of other ideas that involve the belief that all of us liberals are steeped in Marxism and anti-Americanism and live to raise his taxes.

And now as he lies there dying of a preventable illness, this man has managed to wrap his brain around the idea that the one thing he should have done differently was to get vaccinated. Where his logic fails is in the lack of realization that the whole batch of political propaganda, he has been buying into from his friendly radio talk show host and his sarcasm-steeped cable tv news source are all lies and half-truths and mistruths.

Most of the other lies did not kill him, but this one will do so.

It is the why and wherefore of this propaganda that is the real story that we as a civilization have to resolve.

See, the fact that this patient -- and so many others -- is suddenly, in the face of imminent death -- changing his tune is not that much of a message. It's akin to the old Samuel Johnson remark, "Depend upon it, sir, when a man knows he is to be hanged in a fortnight, it concentrates his mind wonderfully."

So, all of a sudden, 8 months after the vaccines became readily available to the American public, we're getting these death-bed conversions. The problem is that the patients aren't sufficiently sure exactly what they should be converting from.

There's one other point which we really ought to consider in thinking about this dying man and all the other patients who will either die or recover fitfully from a painful and debilitating illness. It's the cynicism of those who crafted the anti-vaccine message to begin with. Think about it for a moment -- there was no particular reason that the right wing propaganda machine should have taken a stance against Dr Fauci or the CDC or even their own state public health authorities. But because a couple of CDC and NIH people raised their eyebrows a couple of times when Donald Trump said something particularly silly, the Trump supporters felt that they had to attack the scientists and doctors. Trump's genius (in their minds) had to be defended, even if it was about a subject that he had no knowledge of.

So, the right wing radio announcers built this case that the CDC is corrupt, that the NIH is only in it for the money, and that the drug companies are even worse.

There is one other point that is relevant. It's possible to be a strong supporter of your political leader and still not defend every single thing he does. I certainly had mixed feelings about Lyndon Johnson, considering that he was simultaneously working to bring America out of the Jim Crow age and yet was drafting hundreds of thousands of men my age to get blown up in Viet Nam. I think the Democratic Party was in an analogous situation last week in terms of the handling of the Afghanistan withdrawal.

But the right wing noise machine is different. I'm not hearing a lot of criticism of Trump's plan for withdrawal from Afghanistan, any more than I'm hearing a deeply critical analysis of the anti-vaccine position that is needed.

One more thought from an old source

In watching these television news snippets and reading about the dying Covid-19 patients on the internet news, I was reminded of an old line that was written by the science fiction author Robert A. Heinlein in the mid-twentieth century. The context, I think, was space travel and people who were needlessly sloppy, but the conclusion holds just as well in these current-day tragedies:

“Stupidity cannot be cured. Stupidity is the only universal capital crime; the sentence is death. There is no appeal, and execution is carried out automatically and without pity."

In other words, the universe will not protect you from your own stupidity.

It's a bit strong, even for the author who wrote Starship Troopers and The Moon is a Harsh Mistress. But Heinlein had a point. All those people who have rejected getting the vaccine have done so for reasons of their own, mostly involving accepting a line of propaganda that is ill-founded -- steeped in lies and illogic. That dying man lacked the self-understanding to reject the whole mass of illogic that comes from manipulative right wingers. It's too bad that these people can't or won't reconsider the illogic that drives them to the self-destruction of risking a full-blown Delta variant of the Covid-19.

(Bob Gelfand writes on science, culture, and politics for Citywatch. He can be reached at [email protected])