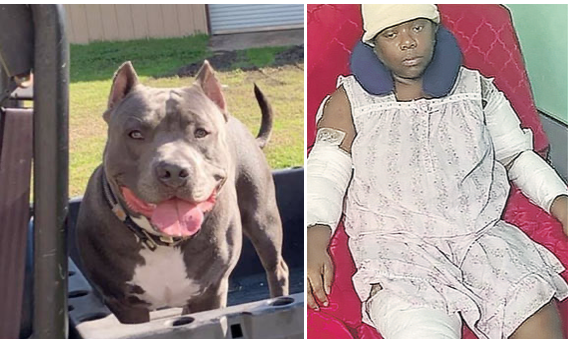 ANIMAL WATCH - Breast cancer survivor Alicia Barton will struggle for the rest of her life with the pain, crippling injuries, and panic attacks she suffers after a vicious attack by four Pit Bulls last month.

The mauling, which occurred near her home as she started to get out of her car, was first described on January 31, 2022 by an EWN News reporter who interviewed her sitting in a wheelchair in Nassau, Bahamas, with her head and other parts of her body wrapped in heavy bandages.

Alicia recalled seeing the pack of dogs charging toward her, and she tried to get back in her car but stumbled under the impact of he dogs jumping on her and tearing at her body. They ripped off her ponytail and scalp before latching onto the back of her head, according to the report.

“I was just screaming for someone to help me, but I couldn’t see anybody. The dogs were in every direction, she said.

An image showing Barton’s severe head injuries had to be blurred due to its extremely graphic content, EWN explained. The gruesome attack left deep gashes on both of her arms and legs, and most notably “left a gaping wound at the back of her head, which appeared to expose her skull.”

Responding officers, called by witnesses, could not get to her and had to shoot one of  dogs, causing the others to scatter from the scene. A neighbor drove her to the ambulance, because the emergency medical responders “were scared the dogs could return to the area where she was attacked.”

She told EWN, “As a breast cancer survivor of 11 years, I thought my fight with the disease was the biggest battle of my life, but “now I have to fight dogs in my yard as I’m going into my home; I don’t understand that.” 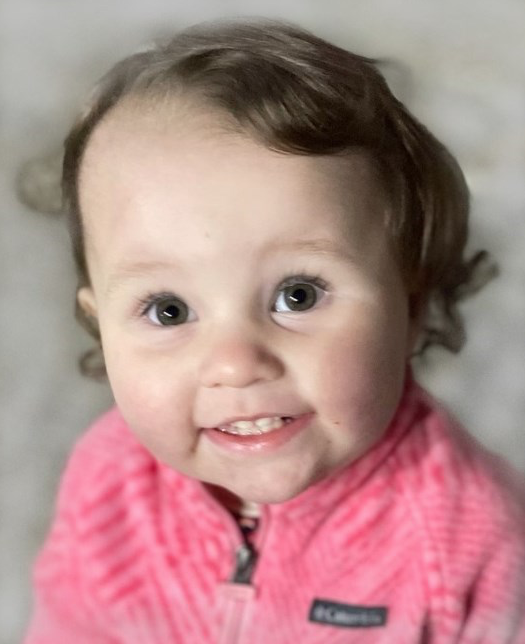 “The dog got her on the back of the neck and head and on her face, her mother posted on Facebook, according to Dogsbite.org.  Lola who would have been two years old if she had lived to March 28, but she had irreversible brain damage and her little heart just stopped on February 6.

"The damage is done and it’s beyond repair," her mother wrote.

It would be expected that the major “humane” groups who receive hundreds of millions of dollars each year from donors to protect animals and humans would be appalled at the statistics compiled from media outlets in the U.S. and Canada by National Pit Bull Victims Awareness, which has recorded all media reports of Pit Bull attacks since 2015.

Shouldn’t these very wealth organizations be seeking ways to assure that these dogs, with bloodlines bred for dog fighting and dating back centuries, are maintained in a manner that assures the public (and family members of owners) are safe?

Mia Johnson, founder of NPBVA states that, “Typically, there have been 600-900 attacks reported each year. On the website, visitors can see the location of all the attacks in the U.S. and Canada on a map and search the database by age, gender, location, and by keywords that specifically describe the incident.”

“Pit Bulls kill 30 Americans every year, with an average of a death every 11 days,” she states.

” Last year 50 people were killed by all types of dogs, and 72% or 36 of those deaths were by Pit Bulls and Pit Bull mixes, even though Pit Bulls make up only 6% of the dog population.”

“However, most attacks are not reported by the media. As an example, in New York City alone, there were 2,600 Pit Bull bites recorded by the Department of Health in a recent three-year period. During this period only 20 bites were actually covered by the media.”

Another tragedy she describes is, “The liability limits of a maximum of $100,000 to $300,000 are rarely sufficient to cover the actual and long-term medical costs of a Pit Bull attack.  Pit Bulls tend to tear flesh from the bones and rip body parts like ears and noses.  Most victims we follow endure numerous surgeries over many years.  Many need amputations.  Most never recover psychologically,” she said.

Someone has to ultimately pay for the deaths, injuries and loss of income to the many victims of these attacks who leave dependents behind, incur massive expense and/or cannot return to work because of disfigurement or loss of body parts, and the many who have families to feed and support. This is the purpose of insurance and, in every area of coverage, the factors of risk are figured into the premiums. (If you drive a Mazarati you pay higher premiums than if you have a 4-cylinder family car.)

If all dogs are insured at the same rate, yet the cost of the damages they inflict are far higher for one breed or breed-type, the insurance companies will just raise the rate for ALL home/dog owners to cover their costs.

However, as they have in much  of the U.S., ,a group of America’s most affluent humane organizations, including--but not limited to--Best Friends Animal Society (BFAS), American Society for Prevent of Cruelty to Animals  (ASPCA),The Humane Society of the U.S  (HSUS) other non-profit (tax-exempt ) organizatios and  have joined with dog breeders’ groups, including the American Kennel Club (AKC) which does not recognize Pit Bulls as a breed; and the American Dog Breeders’ Association (ADBA), which was originated to register fighting dogs, to lobby against ANY breed specific protection laws.

They now want to assure that Canadian insurance companies cannot deny, restrict or charge a higher premium for insuring Pit Bull and other dangerous dogs, based on actuarial information, related to the statistical calculation of risk.

They have reportedly submitted their “White Paper” to  the Canadian Insurance Council to support their contention that  breed-specific laws are not effective or enforceable, primarily because Pit Bulls cannot be visually identified.

The Canadian Council of Insurance Regulators is asking for input on the request from various perspectives.

Since January 1, 2022, there have been 14 Pit Bull attacks—including one human  fatality--on pets and humans reported by media outlets in the United States and Canada and listed on the National Pit Bull Victims Awareness database, which has  maintained media-reported attacks since 2015.

Among the latest was a gruesome incident where an 18-year-old and two other younger teenagers in Florida kicked a tree to force a terrified cat to fall from it so that their Pit Bull could attack and kill it, undoubtedly training it for dog fighting.

The question is posed in their White Paper  to the National Association of Insurance Commissioners (NAIC), “If insurers discriminate against the dog, do they also discriminate against the owner? The use of breed lists has a detrimental impact on three groups—uninformed consumers, people of color, and consumers of low or moderate means,” the advocacy groups say. (The NAIC sets the rules for American insurance companies.)

The group is now using its same White Paper to attempt to influence the Canadian Councl of  Insurance Legislators.  Within their dubious arguments, the groups objecting to breed-specific protections for all communities insult the intelligence of non-White consumers, contending that:

The dog advocate groups want a moratorium on “banned breed lists.” An NAIC spokesperson said the request would be reviewed at the group’s spring 2021 meeting

The group of wealthy animal “charities” thriving on the public’s soft heart for animals and generous donations, including Best Friends Animal Society, the American Society for the Prevention of Cruelty to Animals (ASPCA) , and the Humane Society of the United States (HSUS), joined by the nation’s most prominent dog breeding organizations, the American Kennel Club (AKC) and the American Dog Breeders Association (ADBA), which began as a registry to fighting dogs, are preparing  for an appearance  before the Canadian Insurance Legisltors to convince them that this breed is no more dangerous than a toy poodle and control the laws regarding dangerous breeds of dogs.

Let’s look at the public financial reports on these groups.  The last available reports are from pre-COVID-19, due to extensions in filing provided by the IRS, so here are the latest 2019 figures (published by ProPublica), which undoubtedly have increased considerably since the economic recovery:

It appears a substantial  investment was made in publishing a paper and  involvement in intense lobbying activities nationwide and in Canada to assure that Pit Bulls have no restrictions, regardless of damages they cause. Are donors planning on this expenditure of their hard-earned dollars?  Let’s look at the organizations involved:

ASPCA – American Society for Prevention of Cruelty to Animals

)Note: The AKC webpage,  begins with the sentence, “The AKC does not recognize Pit Bulls as a specific breed.”  However, it then explainS why there should be no BSL (Breed Specific Legislation.) and the difficulties and expense in enforcing breed restrictions for Pit Bulls and identifies their source for the costs as “Best Friends Animal Society.”)

The page, titled “expert advice” can be seen here, which wil also lead you to a legislative page by this organization which registers puppies and promotes breeding.

IF MAJOR ANIMAL GROUPS CAN IDENTIFY “PIT BULLS”—SO CAN  OTHERS

Best Friends Animal Society has an entire section on its website encouraging the adoption of Pit Bulls with photos that identify them as that breed or breed-type (See: Best Friends - Pitbulls: Everything You Need to Know.)

ASPCA CAN IDENTIFY PIT BULLS:  (See: The TRUTH About Pit Bulls: What You Need to Know | ASPCA)

This disproves the theory that animal control officers, law-enforcement professionals and veterinarians, insurance company investigators, along with the public and the media cannot visually ID a Pit Bull or Pit Bull-type/mix dog..

If Best Friends and its affiliates and animal shelters and rescues (which are overcrowded with these “big dogs”) can recognize them, so can everyone else—especially the animal control, law-enforcement and medical emergency professionals that deal with horrific attacks by this type dog far too often?

The history of this organization on Wikipedia states:

The ADBA was founded in 1909 by Guy McCord and Con Feeley, both of whom were breeders of American Pit Bull Terriers. They were also friends with John Pritchard Colby of Newberry, MA. who was a breeder of fighting pit bulls which became known as the Colby strain. In the early 1900s, Colby advertised as having "bred and sold more fighting dogs than any one man in America."[11]

With the recognition of the American Pit Bull Terrier as a standard breed, the ADBA distanced itself from any association to dog fighting.

GENETICS EITHER MATTER IN A DOG OR THEY DON’T.

Best Friends Animal Society, the AKC (and ADBA) can’t have it both ways—either genetics matter in the physiology, behavior and innate instincts of a dog or they don’t.

How do they explain the strict rules for dog shows and registration of dogs and expect the public to believe that Pit Bulls admittedly bred for dogfighting and continuing to be bred for their appearance and champion “bloodlines” do not also have the genetics to attack and kill instinctively?