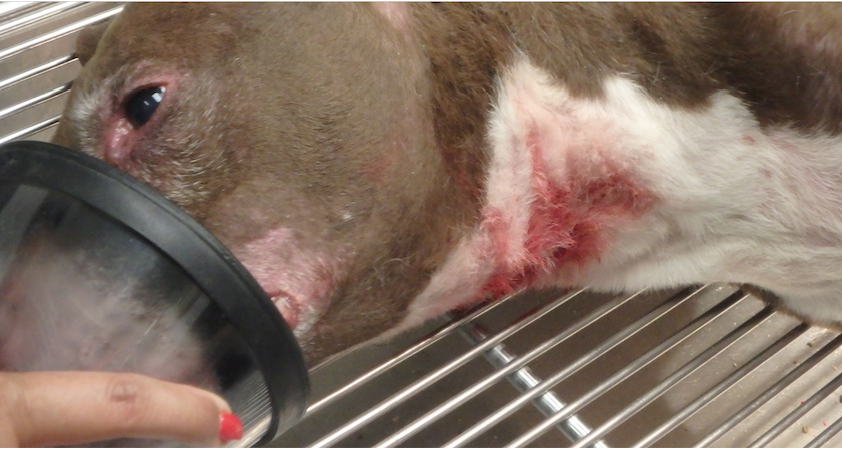 ANIMAL WATCH-Los Angeles Animal Services’ former-GM Brenda Barnette left a legacy of Best Friends’ “No Kill” policies which reject unwanted, lost and stray dogs and cats, claiming they are better off in the streets and with strangers than impounded and protected in the City’s shelters.

Among the most egregious of these fallacies and political deceptions is “managed intake” -- now-championed by LAAS Assistant GM Annette Ramirez.

Here’s how it worked on May 26, 2021, involving a man estimated in his late 20’s to early 30’s who brought a Pit Bull to the South Los Angeles shelter, according to the shelter supervisor’s Critical Incident Report, employees’ statements, and City documents.  (Names of shelter employees are not included to protect their privacy and emphasis is added.)

The emotional details in the report that conveys the fear, tension and deep dedication of these employees and the kennel supervisor are vital to understanding the devastation that has occurred under the politically motivated “managed intake” program.  We need to relive this with them:

At around 2:40 p.m. a Hispanic gentleman with no shirt and shoes came to the shelter with a pit bull looking dog. The dog appeared healthy. He approached the window and told the ACT [Animal Care Technician] that he needed to euthanize his dog. The ACT asked if he had an appointment, to which he stated that he did not.  He was advised that he would need to make an appointment.

He then became irate.  The ACT called for assistance in Receiving. . .I had heard yelling and then heard the call. . .I went to the area and saw the two ACT’s were going to deal with the situation.

At the same time, an RVT [Registered Veterinary Technician] was speaking with an adopter nearby.  She said she was alerted that the man stated he was going to cut the dog.  The man had a boxcutter in his hand and was holding the dog by the scruff of the neck.  An ACT turned around and began talking to him.  She asked if she could take the dog from him.  He asked her if we were going to kill his dog if we took it. She stated that we would not but that we could take the dog to help it.  He then began yelling that he needed to do this and slid the blade out of the box cutter.

At this time I approached the RVT, the man and the dog. The RVT yelled at the man to stop and leave the dog alone.  The man began to make multiple swipes across the dog’s neck with the box cutter, and he sliced into the dog’s neck.  This caused us to move forward yelling and try to get to the dog. The movement caused the man to stand up and wave the box cutter back and forth at us.

I attempted to get the dog, but the dog turned and charged me. I had to back pedal from the dog trying to bite at my legs and swung my hands and rope trying to keep the dog from being able to get me. The dog then turned and ran through the parking lot.  I tried to get out onto the street ahead of the dog to catch the injured dog.

Meanwhile the man [owner] began trying to get to the dog, but the RVT started chasing after the dog and told him to stay away.  The man put away the boxcutter, but as members of the public were yelling at him, he continued to engage verbally with them.

The dog beat me to the street and started toward Western Ave. so I crouched to see if I could call the dog over to me but it refused and started running down 60th toward Western.  Other employees pursued the dog.

I stopped and called over the radio to see if we could get an officer to get a vehicle and head toward Western Ave. I then noticed the suspect walk over in front of me to see where the dog was going.  He walked back to a white Ford F-150 pick-up truck. I wrote down the license plate number on my hand that ended up fading with sweat.

LAPD had been called when the dog began to run to report the incident and he also provided the license plate on the phone to the LAPD dispatcher.

He [the dog owner] backed up the vehicle and stopped in the driveway and began yelling at another employee and myself that he wasn’t afraid of any of us. He said that we couldn’t do anything to him.  He then pointed skyward and stated that He was the only one that could do anything to him.  He drove off.  We continued to make our way toward the dog.

Members of the public and people from the recycling center had helped block the dog and corralled it into a vacant lot.  An ACT was able to rope the dog and the dog lunged at his face and tried to bite. The dog began thrashing around, but he was able to muzzle and pick up the dog.

I began calling over the radio for a vehicle to help bring the dog back to the shelter but there was no response.  (I had forgotten that all vehicles were out in the field or out of service.)

I ran ahead calling for a rolling cage and was provided one in the receiving area.  The dog was then rolled back into the medical area for Dr. Prupas to assess the dog and go into surgery.

Regarding subsequent response, the supervisor wrote, “LAPD Officers from 77th Division came out and took the police report for the incident. . .The dog was identified on intake as LAPD Evidence,” and, the report states that “LAPD is looking at moving forward with Animal Cruelty charges.”

“The dog had surgery and is recovering.”

NO PROFESSIONAL “CRITICAL-INCIDENT DEBRIEFING” FOR EMPLOYEES

The supervisor involved wrote, “Supervisors here at the shelter believe we need to have an after-action meeting to try to come up with a procedure on how to safely handle situations like this.”

A very experienced and compassionate Lieutenant’s comment on May 27, “. . .Moving forward we should have a debriefing on this situation” was ignored in meaningless, politically correct responses from Department management and the Mayor’s office.

Psychological debriefing is broadly defined as a set of procedures including counseling and the giving of information aimed at preventing psychological morbidity and aiding recovery after a traumatic event.

The reactions to these events, as in other law enforcement agencies, fire,  emergency response and military venues, are often not immediate but occur after the tension seems to have dissipated and the individual believes he/she has coped well. These unresolved issues can lead to drug and alcohol dependence, divorce, and other serious reactions. These critical incidents require counseling by professionals in these fields.

HOW DID THE MAYOR AND LAAS MANAGEMENT RESPOND?

Lavish atta boys, “great job,” “you saved the dog’s life” and other comments from management and the Mayor’s Office, but little concern for the employees’ (or the city’s animals) well-being in the future. No call for an immediate review of City/LA Animal Services’ policy.

There should have been immediate attention to the Managed Intake policy, with the emphasis on the safety of employees, as well as the animals that are being rejected.

There were at least nine LAAS employees who were involved in this incident. There were approximately four more witnesses from the spay/neuter clinic and the public, according to the various written observations -- all of which essentially mirrored the supervisor’s report.

MANAGED-INTAKE’ IS A FAILURE AND A DANGER

Traditional LAAS’ (and other shelters) intake policy would have been to accept the dog for its safety.  In filling out the forms or talking with the owner, they would have asked questions that could determine whether or not the owner should be encouraged to keep the animal.  If there was (as it appeared in this instance) reason to believe he would hurt the dog or a human, the policy would have been to call LAPD immediately -- not insist that this disturbed individual make an appointment with the shelter.

But, under LAAS “No Kill” restrictions, these employees are no longer allowed the freedom to make this type of determination, based upon their experience, training and skills…because it might mean that an animal would/should be euthanized for health or behavioral reasons and would count against the City’s 90% “No Kill” statistic recently announced by the Mayor and Best Friends -- and which is the fundraising gold ring.

Perhaps LAAS management and the Mayor’s office forgot that Mayor Garcetti defunded the Animal Cruelty Task Force, which was created by a 2005 motion by former Councilman, now-U.S. Congressman, Tony Cardenas, and was under the Protective Support and Vice Division of LAPD.

Then-GM Barnette did not oppose the defunding of this important unit and publicly demonstrated disdain for law-enforcement on September 25, 2020, when she undermined an on-going cruelty case and demeaned her own officer.

Although LAPD is undoubtedly investigating, it has now been over two months since this incident, which did not appear in the media for public assistance to provide information about the suspect.

Why is there seemingly a concerted effort in Los Angeles to hide the cruelty resulting from the “No Kill” policies that discourage or refuse services to unwanted/stray animals?

Humane Societies (without public contracts) have the option of selecting those animals they will take in.  City and municipal (tax-funded) shelters do not and should not -- because we all pay for them to be our last best hope and safety net for both people and animals.

However, under “Program Overview,” Best Friends states, “All agencies, even those with an obligation to take in all animals presented to them (either by law, contract or policy), and the communities they serve can benefit from managed admission because rather than saying “no” to an animal, they are simply saying “not right now” and ascertaining what other options besides intake may be available. . .”

The link to this information indicates it is at “Bestfriends.org/training-playbook”  but, as we have just seen at the South Los Angeles Animal Shelter, reality isn’t a “playbook.”

When an animal is in danger or poses a danger, “not right now” is a “no.”  Waiting for days or weeks for an appointment could be a death sentence for an innocent pet or career-ending permanent injury to an unsuspecting person.

Doesn’t that violate the foundational mandates of, and the very reason we have, open-admission agencies?