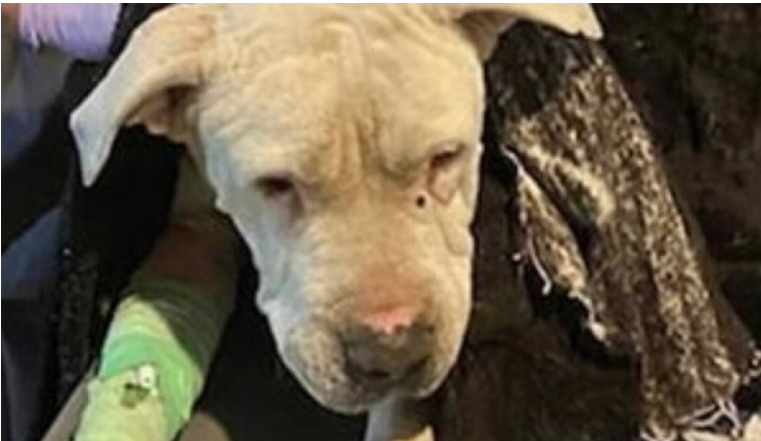 ANIMAL WATCH-A “rescued Dogo Argentino-mix” (or white Pit Bull) named Brody, was reported stabbed and beaten on April 12 at a “foster home” in California City where he was placed by Ace of Hearts dog rescue

-- a group banned in 2017 by LA Animal Services GM Brenda Barnette from keeping dogs in the city of Los Angeles.

LA Animal Services’ decision was generated when two Pit Bulls owned by Ace of Hearts, a West Hollywood (Los Angeles County) organization which “specializes in bully breeds,” attacked  innocent victims in two separate incidents while in the care of fosters in LA.

Both were declared Dangerous Dogs by LA Animal Services' GM Brenda Barnette,  meaning  the dogs must be removed from the city or be euthanized and that the owner cannot license or keep another dog within the city limits for three years.

Kari Whitman, founder of Ace of Hearts, appealed. The appeals on both Pit Bulls were heard by the Animal Services Commission and the Dangerous Dog declarations were  upheld. The appeal on the second Pit Bull, which had viciously attacked two children, was held on November 14, 2017.

On April 16, KERO (Bakersfield), and other media sources announced that Brody, a dog “rescued” by Ace of Hearts and left with a foster in California City, “. . .is fighting to recover after a brutal attack left him with nearly a foot-long stab wound and other injuries which indicated he had been beaten, as well as stabbed.”

Reports state that Ace of Hearts, the organization that was “caring for the dog,” is calling for justice, seeking a new foster home and accepting donations for $11,000 in surgery and veterinary care.

Kari Whitman, founder of Ace of Hearts, told KERO that 10-year-old Brodie “had been under foster care in Cal City for the past several months. She said, “his foster left Brodie in a side yard to her tiny home and when she returned found him badly wounded.”

"She had supposedly had an altercation with her sister," Whitman said, "and came back and he had an 11.5-inch  knife wound all the way down his spine, a broken leg and hip.”

He is now in an animal hospital in Woodland Hills, and Whitman said, “she wants the person responsible for his injuries to be held accountable.”

Does she need look farther than a mirror?

IS ACE OF HEARTS REMOVING ITSELF FROM RESPONSIBILITY?

Describing the release of an alleged Dogo Argentino-mix, a Mastiff-breed dog, to someone in a “tiny house” with violent relatives as “caring for the dog” may be a hard sell.

Brody was previously in a “high-kill shelter before being rescued” by Ace of Hearts, TMZ reported. There is no indication of Brody’s past behavioral record, and why he was impounded. Ace of Hearts’ site and past record in Los Angeles indicate it takes “at-risk” bully breeds from shelters.

It is unlikely Brody would have sustained these horrific and painful wounds in a shelter, so. . .

WAS HE REALLY ‘RESCUED?’

ACE OF HEARTS AND BEST FRIENDS’ ‘NO KILL LA’

On the Best Friends Animal Society site, above the assertion, “We will reach no-kill in this country by 2025,” is a link to Ace of Hearts Dog Rescue (NKLA), which states:

Ace of Hearts Dog Rescue is a 501(c)3 foundation dedicated to rescuing dogs the day they are scheduled to be euthanized from various Los Angeles shelters and placing them in qualified, loving homes. We rescue all breeds, and specialize in bully breeds. . .We rehabilitate and place dogs in the right homes.’

It appears that may not be going so well, considering the ban by of LA Animal Services, and the recent headlines regarding Ace of Hearts’ placement of Brody.

The advent of the “No Kill” movement brought the overt and underlying goals of painting official animal shelters as “animal killers,” rather than as the only safe refuge for many unwanted pets and strays.

Another strange phenomena is that both governmental (tax-funded) and private (donation-supported) shelters are destroying their own reputations for safety and professional care in order to appease and garner favor with the large “humane” organizations that are raking in millions of dollars by influencing media reports that handing out animals to anyone - and  not taking them to shelters -- is better than safeguarding them in facilities designed, maintained AND REGULATED to protect their health and safety under local and state law.

One of the first “No Kill” measures implemented by GM Brenda Barnette was a policy in LAAS shelters prohibiting behavioral notes on kennel cards where they might be seen by the public, since full disclosure of employees’ experiences or observations might influence a potential adopter. The reported or often-obvious designation of the breed of dogs was also eliminated.

It has now evolved into the HASS (Human Animal Support Services) program, which adds encouraging shelters to not take in lost and stray pets, if possible, and encouraging finders to take in any found animals and advertising online to find the owner, rather than taking them to the local shelter where the owner would search for the pet.

The latest “No Kill” step is that dogs and cats in the shelter will be drugged in order to modify their behavior and “stress” and expedite adoptions. (See: Dogs, Cats Will be Drugged in LA Animal Services “No Kill Shelters.)

Shelters are also urging owners to avoid shelters completely by doing a “home-to-home” placement from such sources as Craigslist, Facebook, Next Door, etc. This is destroying the ability to enforce laws regarding the health, welfare and protection of pets, licensing, spay/neuter, and microchipping and to monitor the conditions, activities, and sales by unregistered backyard breeders.

THE OUTCOME CAN BE TRAGIC: