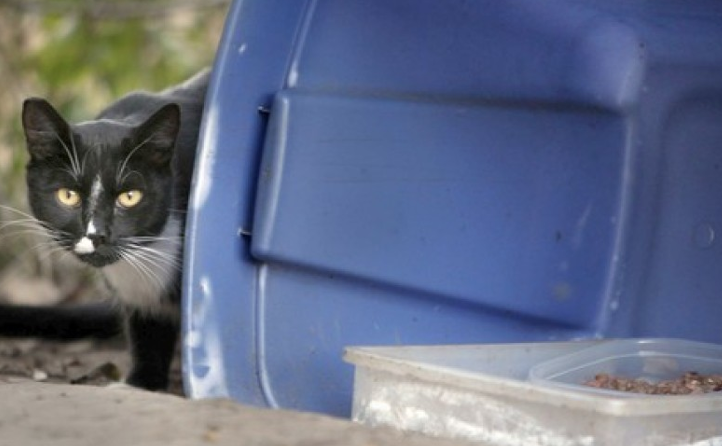 she did not publicize that the new ordinance would also require pet owners with more than three (up to five) indoor cats to pay a registration fee for their extra pets.

Under that program, the City is now obligated by law to provide annual spays/neuters for 20,000 unowned/stray/feral cats living in the streets of Los Angeles, which will be done primarily by volunteer TNR (trap/neuter/release) caregivers. All of this will be paid with City money -- either tax dollars or donations.

Volunteers will set traps mainly in residential and business areas, then take the trapped cats to a veterinarian for sterilization and return or release them in public locations, where they will hopefully be fed for the rest of their lives by a "caregiver."

Los Angeles homeowners, renters and businesses can expect to see these colonies established in their neighborhoods soon. The new plan also gives feral (community) cats the right to roam anyone's private and public property without interference.

The Citywide Cat Program projected an estimated expenditure of $2 million annually, based on current cost of approximately $100 per cat, and it extends for 30 years.

The fees for the extra pet cats first appeared on the January 28, 2021, meeting agenda of the LA Animal Services Commission as  Item 6(C) - AUTHORIZE A REGISTRATION FEE FOR MAINTAINING MORE THAN THREE CATS UP TO FIVE.

Deputy City Attorney Steve Houchin, who wrote the ordinance, advised Barnette and the Commission that, "The registration requirement is already in place.  People are required to register. It is part of the existing [Citywide Cat Program] ordinance."

He added emphatically that, "today's discussion is about adding a cost to the registration."

Despite Barnette's efforts to distance herself from enforcing the owned-cat registration fee, the Deputy City Attorney was clear. At the end of the discussion, he summarized, "The rules say what they say and the penalties are what they do."

Barnette explained that the fee is only required if you exceed the three-cat limit (up to five). It is not per cat and not voluntary.

She argued that it will be a "Win-win for cats and the community, and it "gives us a way to track and have statistical analysis of the number of cats in the community."

She claimed that the purpose is to "try to get an accurate count," and she thinks people will want to participate and pay an annual fee of $10. "These owners have already spent money on spay/neuter," she told the Commission.

However, she said she is "not calling it a permit." It will be a policy and an ordinance on the books but "if you don't have personnel, you don't enforce it."

She also told the Commission that it is not practical to do inspections to count cats and would be an unwise use of personnel . . ." We are hoping people will abide by it."

"I wouldn't want to call it voluntary; if it passes it will be part of the ordinance and  that it is the expectation.  Enforcing it would be more of a challenge than we would have the staff to handle."

Commission President Larry Gross assured, "It is a policy to encourage people to abide by this, but no one will be fined if they don't do it."

"It provides us with more information if the EIR is challenged down the road. We spent time and resources to get this through. We want to make sure we have the data to defend the EIR and be able to provide support for TNR."

Barnette then explained that it may have been confusing that it went through with the EIR. "Knowing how many cats in the city will help us estimate how much money we need for spay neuter."

The LAAS Commission report for January 28, 2021, states that the ordinance approval also revised LA Municipal Code Sec. 53.06.1 to include the following language:

Cats - No person shall keep or maintain more than five (5) cats over four (4) months of age at any premises, including any Dwelling Unit. . .or at any lot, building, structure, enclosure or premises that does not constitute a Dwelling Unit.

Any person who keeps or maintains more than three (3) cats at any such location shall comply with the following requirements:

"As this new law allows the maintaining for up to five cats, the Department is proposing to institute a registration fee of ten dollars ($10) annually for households with four or five cats."

President Gross asked, "How does it impact rescues?"  Barnette replied, "Not at all--no limits on cats under 4 months old--unless they want 5 altered pet cats."

Commissioner Jose Sandoval asked, "What is the projection of number of people who would participate in paying?"

Deputy City Attorney Houchin clarified, "State laws speak differently about dog licenses and don't speak to cats. He said he wanted to make it clear, "We have not created a new licensing scheme for cats."

He emphasized that this newest ordinance imposes a registration requirement. That is not the same as a license. It is not a condition precedent -- if you have 4 or 5 cats, you have to meet requirements.  One of those is registration. What is now being considered is the fee to go with the registration."

President Gross speculated, "I think we will see more people having problems with the registration than with the $10 fee. . .Invasion of privacy. Is there an outline of what needs to be in the registration or can it be as simple as possible? What are the enforcement mechanisms for the registration?

Deputy City Attorney Houchin responded, "I drafted it. It does have required criteria for registration: Name, Address, Number of Cats, and other information as deemed necessary and flexibility to ask more. "

"The general rule is that it is enforceable as a misdemeanor, infraction or administrative citation," he explained, "People should know that a law is enforceable. Technically there are consequences for not complying with a city ordinance."

Commission President Gross expressed concern that, ". . .more-than-five-cat people will be worried that someone will knock on their door."

Houchin responded, "That isn't an answer I can provide. The rules say what they say and the penalties are what they do. I think the Department does a good job communicating. It would not be right for me to say anything other than what the rules are and the possible consequences."

GM Barnette commented, "We are trying to turn over every stone we can to look for spay/neuter funding because we don't think it is likely we'll get the kind of annual allocation that we've been getting or that the fees we collect will be enough to sterilize the number of animals."

(Does this mean the City doesn't have the funds to implement the Cat Program as required under the EIR?)

President Gross ended the discussion and reminded the Commission, "We are now dealing with the fee."

The vote was taken and the registration fee was unanimously approved.

In 2008, the Urban Wildlands Group and five other conservation organizations sued the City of LA, arguing that it was surreptitiously implementing elements of a TNR policy. without doing an environmental review (EIR) of the adverse impact on wildlife and humans, which City officials had previously promised.

LA’s Superior Court issued an injunction preventing the City from doing anything related to TNR until that review was conducted.

I asked Travis Longcore, Science Director for The Urban Wildlands Group-- for his opinion on the final LA Cat Program. He responded that it is important to mention an issue that wasn't part of this Commission discussion--the right for the pubic to remove "nuisance cats" from their property.

"In response to our extensive involvement in the environmental review process over the past decade, the City finally, in the last iteration, revised its Cat Program to explicitly affirm the right to remove unowned cats that are causing a nuisance, which encompasses a broad range of impacts."

"The City’s new program also discourages feeding of unowned cats beyond that which was already happening before the EIR was approved.  Anyone who starts feeding unowned cats now is in violation of the City’s policy."

FEES FOR EXTRA PET CATS - A MATTER OF TRUST

It seems the City of Los Angeles has exchanged one stumbling block for another. Now that the environmental concerns about TNR have been addressed to the point of discussion -- will LA cat owners who have two, or more, extra indoor cats trust Brenda Barnette and L.A. Animal Services with that information? Would you?

(Phyllis M. Daugherty is a contributor to CityWatch and a former LA City employee. She is currently employed by the U.S. Postal Service.) Photo: LA Times. Edited for CityWatch by Linda Abrams.