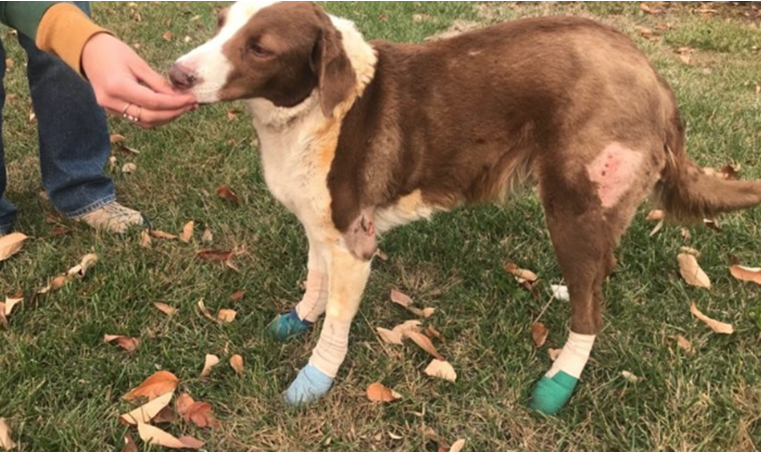 So far, that hasn't been publicly announced, or an alternative offered, and it appears none of the City leaders are asking why. Hundreds of kennels and cat cages are empty, but Barnette has made no comment about  their potential use during a disaster.

The expansive West Valley shelter, located in the area with the City's greatest number of horses, livestock and farm animals, has a large (now shamefully unkempt) pasture and barn area for temporarily taking in lost/stray hoof animals (until transport to Hansen Dam or the Equestrian Center can be arranged), but it is completely shut down.

According to City records, the West Valley shelter is being rejuvenated inside -- ostensibly for its planned transition to a 'Community Services Center' with office spaces -- not the public animal shelter for which LA residents are paying.

The other LA Animal Services' closed  facility is the North Central shelter near downtown LA, which serves the most densely human and pet-populated areas of the City, with early-1900's apartment  buildings housing large immigrant populations crammed between luxury high-rise complexes.

There is no mention of discussion of potential emergency housing on the Animal Services' upcoming Commission meeting agenda, although wildfires  have damaged areas uncomfortably close to the borders of the City and the following two dangerous Valley fires occurred this month:

On September 5, Patch reported, "About 20,000 square feet of brush is burning along Rinaldi Street in Porter Ranch.”

The fire was reported just before 3 p.m., according to the Los Angeles Fire Department's Nicholas Prange, and quickly grew to four acres.

About 135 firefighters were assigned to launch an aggressive ground and air attack on the fire that was "threatening several homes” "and the quick response prevented structure damage and stopped the fire's forward progress,” the report says.

On September 18, Patch reported that 72 firefighters took 30 minutes to extinguish a fire in Northridge, according to Los Angeles Fire Department.

The fire was reported burning in the rear unit in a commercial building on  West Parthenia Street, near Reseda Boulevard. (This was about half a mile away from an apartment complex that burned to the ground on July 4 from illegal fireworks.)

LEAVING ANIMALS BEHIND IN A FIRE

Every year California is ravaged by fires which necessitate quick evacuation and often necessitate a decision  between saving the human family or remain to try to also save pets that are afraid and resist confinement.

And, of course, this is also an issue with frightened large/farm animals that suddenly become uncooperative.

This painful decision had to be made by a Paradise, CA, family when flames rapidly overcame their community in 2018 and they could not find their beloved border collie, Ella. As flames swooped down on their neighborhood, they were forced to quickly bundle up their two children and leave, fearing she would not survive. Amazingly, Ella was found two days later, badly burned but still bravely guarding the only remaining house on the street.

Every year, horse and/or other livestock owners across CA are faced with the dilemma of releasing animals, hoping their natural instincts and the freedom to run will result in survival.  The forethought of microchipping them may be the only way they can be identified and returned later.

Anywhere you receive emergency preparedness information, it is good to  at least consider it because every situation is unexpected and different.  Even some of the most elementary tips and reminders can contain brilliant wisdom.

The Centers for Disease Control (CDC) has one of the most comprehensive advisories available for evacuating pets/animals in an emergency.

On one page, it lists steps for pet owners  to take before, during and after any disaster.

It has a Pet Disaster Checklist that should be posted in every home (and shared with friends and family that have pets.)  Here's just one section.

Disasters can happen without warning, so be prepared:

Here it is in Spanish:  Seguridad de las mascotas durante emergencias (CDC guidelines  in Spanish), which should be posted/shared widely in Los Angeles, where Spanish is the first language of many pet owners.

PROTECT YOUR PET FROM DISEASE DURING NATURAL DISASTERS

Here's what the CDC says about disease transmission from close proximity in overcrowded conditions, unsanitary circumstances and exposure to wildlife or unfamiliar animals.

"There are some diseases, however, that can be transmitted.  Natural disasters can contribute to the transmission of some diseases. Exposure to inclement weather conditions, stagnant water, wildlife or unfamiliar animals, and overcrowding can put your pet at risk for getting sick. Some of these illnesses can be transmitted between pets and people (also known as zoonotic diseases or zoonoses). . . Read more here.

PETS AND COVID-19 PRECAUTIONS TO PROTECT THEM (Federal Drug Administration)

Can I get COVID-19 from my pet or other animals?

Until we learn more about how this virus affects animals, treat pets as you would human family members to protect them from a possible infection. This means:

Farm owners may be injured or killed attempting to rescue their animals in disasters. . . .Much like household pets, they may be reluctant to evacuate without these animals. Farm owners and horse owners should work with their local emergency management agency and other groups before a disaster to help protect livestock.

The priorities for disaster planning for farms and horse owners vary to some extent with the type of animals and facility. However, you should assemble a disaster kit that includes:

THANKS TO ALL EMERGENCY RESPONDERS

I have worked for both fire and police departments and seen, firsthand, the tragic  aftermath of the devastation they address -- both on the victims and the first responders.

Even the best-trained responders suffer tremendous lingering emotional trauma from the loss of life, injury and damage they not only see, but are attempting to reverse or stop -- not always successfully.

Animal control officers also go into fire and other life-threatening  situations, with little equipment to protect them but a determination to save the creatures that are huddling or running in fear.

All deserve our special thanks for the risks they take and the lives they save. The best thing we can do for them is assure we have taken every step possible to avoid any unnecessary harm to them, our pets and ourselves.

BE PREPARED FOR AN EMERGENCY SO YOU CAN ACT QUICKLY

If you are in the city of Los Angeles, unfortunately, calling LA Animal Services' listed number during a disaster may involve a very long wait. City and County services will be overloaded with calls.

The above resources will help you prepare for your family and pets in an emergency/disaster. Please read them carefully NOW and take the lifesaving steps they suggest.

Plan ahead so you can act quickly and thoughtfully and have already made your pets comfortable with entering a carrier or being calm on a leash--so no one is left behind.