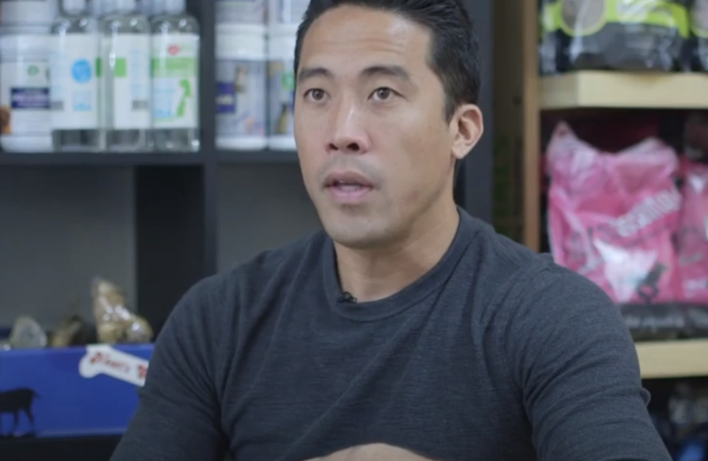 Marc Ching spoke at the first meeting about his letter of intent, stating he could match or beat the current price to provide LAAS with vegan dog food.

Ching submitted a letter on November 17, 2018, proposing to provide the annual supply of vegan dog food for 33,000 impounded dogs to the City of Los Angeles at 82 cents per pound -- 5 cents lower than the meat-based dog food used.

However, he later admitted that he was not currently manufacturing vegan dog food.

Also, in a 2013 radio interview with Wendy Myers, “WHY YOUR PET SHOULD EAT A PRIMAL DIET, WITH MARC CHING,” he responded to her question, "So what is the best diet for a dog?" as follows:

Marc Ching: "Well, the best diet for a dog, in my opinion, is a diet that consists of minimally processed foods. Meaning, you prepare your own, you cut your own meat and your own vegetables, and you just make it yourself."

Ed Buck who rescued Golden Retrievers and was former-director of Social Compassion in Legislation, was charged with providing  drugs that resulted in the death of Gemmel Moore, 26, a gay sex worker, in July 2016, and, later a second man, Timothy M. Dean, 55,  in January 2019.  Dean was a member of the National Gay Basketball Association and also an adult film star named “Hole Hunter,” Wehoville reported.

Marc Ching is the owner of pet supply stores, providing dietary supplements, organic products, and other dietary advice, called The Petstraunt, in West LA and Sherman Oaks, and founder/Director of Animal Hope and Wellness Foundation. He also provides dogs and cats for adoption and has attracted celebrity support for his self-proclaimed passion for saving animals used for fur and food, primarily in Asia.

At the December 2018 Sacramento hearings on banning the sale and manufacturing of fur in California, Ching testified, “Going undercover into fur farms, I have seen the suffering and inhumane treatment of these animals firsthand. As a culture, a people, and a community grounded in compassion, California is ready to go fur-free. Products that encompass such suffering have no place here,” Businesswire reported.

In view of some of the following information, there may be some doubts cast upon that testimony.

He describes what was to be Marc Ching's greatest rescue of dogs to be killed and eaten at the annual traditional Yulin dog-meat festival in China.  (The Daily Mail also posted the article with photos, and the heading, "Those poor dogs went from one hell to another:  Hundreds of animals that Hollywood crusader vowed to rescue from the dinner table in China were later left to die in sweltering cages.")

George Knowles begins, "It’s 9 a.m. on midsummer’s day in the Guangxi Zhuang autonomous region and self-styled animal-welfare crusader Marc Ching is choking back tears as he stands in front of a small group of foreign volunteers in a hotel room, 8km from the notorious Yulin dog-meat festival.

“Today we are doing something that no other group has done,” says the charismatic 37-year-old Asian American, rallying his supporters ahead of what will be his most ambitious rescue yet. “We are shutting down slaughterhouses in Yulin.”

Knowles describes the reaction of female volunteers who have flown from the United States and Britain to China in response to a Facebook appeal by Ching’s California-based Animal Hope and Wellness Foundation as “dabbing their eyes as his address rises to a crescendo."

But, from there on, the anticipated "change in history" announced by Ching, who called this a battleground to "save these dogs," met reality and reportedly crumbled into a disaster for the animals.

Knowles describes how donations flowed in to pay for this massive operation, which promised to save 1,000 lives but left dogs in horrific conditions, which locals claimed were far worse than leaving the dogs at the market where they would have been killed by "one solid blow to the head."

Here is Ching's version: "In the swelteringly hot hours that follow, Ching and his team visit six slaughterhouses in Yulin, paying dog-meat traders to surrender their animals and halt their operations for what would have been their busiest day of the year."

"The following day, June 22, Ching claims that, together with a Buddhist group, his team has rescued an estimated 1,000 dogs from the festival, where some 10,000 are slaughtered and eaten every year."

Knowles explains that, since September 2015, Ching has achieved cult-like status among animal lovers in the U.S. and elsewhere by posting videos of flying a series of solo missions to rescue dogs from slaughterhouses in Cambodia, Vietnam, Korea and Indonesia. He then posts horrifying video clips of torture to the animals.

Ching told LA Magazine, “I have been beaten, robbed, shot at, held at machete blade. . . Every day I’m saturated in blood.”

His online posts describe dismembering, electrocuting and animals burned alive, with "toy breeds being boiled alive and made into herbal supplements."

Tens of thousands of people followed Ching on social media, and, after Yulin, donations poured in.

But, months later a different truth began to emerge, and the two versions did not match. It was learned that few of the dogs actually left China and many died without care. (I will spare any more gruesome details here, but they are vividly described and shown in the source articles.)

A May 24, 2020, an article about Mark Ching was published by the LA Times, "Times Investigation: He was a Hollywood darling for fighting dog meat trade. Butchers say he staged killings; he denies it."

The series of subsequent articles by the Times penetrates deeper into issues like the burning of a dog alive, which is claimed to have been staged by Marc Ching for a video and described as far more cruel than the methods used to kill dogs for food in Asia.

The Times also describes Marc Ching, as "a Los Angeles resident who spent nearly a decade in prison for a violent crime before transforming himself into a prominent leader in the local, national and international animal rights communities."

‘WHO IS MARC CHING?’

This is the title of a public Facebook page, started in 2017, stating its purpose is "Exposing Mark Ching and all the many fake claims he has made in order to steal donations from dog meat trade dogs and rescuers. We also want everyone to know about all the dogs he has paid dog meat butchers to torture and kill for his fundraising videos."

This page provides specific information on the felony charges for violent crimes against Marc Ching (mentioned in the LA Times article) and provides the LA Superior Court Case Nos. and causes of action.

It states, "Our goal is simply to inform the public of what and who Marc Ching really is. This way the public can decide for themselves if they want to hand their money over to a man who hid his past and continues to get caught in lie after lie."

We the undersigned are demanding the immediate arrest and federal prosecution of Marc Ching for torturing and killing dogs, animal cruelty and for fraud and scamming the public:

BUT WHY IS THE FEDERAL TRADE COMMISSION INVESTIGATING MARC CHING?

In an April 30 column, the LA Times advises that the Federal Trade Commission is accusing Ching of unlawfully marketing a product from his Whole Leaf Organics company in Sherman Oaks.

The Federal Trade Commission Press Release on April 28, reads “Thrive” Supplement Marketer Agrees to Preliminary Order Barring Him from Claiming It Can Treat, Prevent, or Reduce the Risks Associated with COVID-19."

It addresses the issues of:

The FTC Case Summary reads:  In response to an FTC complaint, in April 2020, a California-based marketer of a supplement consisting mainly of Vitamin C and herbal extracts has agreed to a preliminary order barring him from claiming that it is effective at treating, preventing, or reducing the risk of COVID-19. Pending the resolution of a parallel administrative case, the proposed preliminary order also bars Marc Ching, doing business as Whole Leaf Organics, from claiming that three CBD-based products he sells are effective cancer treatments."

China has just approved a proposed directive to officially classify dogs as companion animals instead of farm animals. The Chinese Ministry of Agriculture and Rural Affairs calls for “some traditional customs about dogs” to change in the country, clearly describing them as "companion, rescue and service animals."

However, this action was taken less than a month before the Yulin Festival starts on June 15, when thousands of dogs are killed and eaten on the summer solstice.

Andrew Gung, founder of the Duo Duo Project says, “I don’t think they will publicly acknowledge it,” referring to the government officials. “But my source spoke with every single one of the dog meat vendors at Dongkou” — Yulin’s main market for the meat — “and they all said the same thing: a seven-day ban on dog meat sales starting on June 15.”

Since the ban lasts only a week, it is expected that most, or all, of the dog meat vendors will resume as soon as the ban is lifted. But the directive by the government will at least send a signal that the law can be enforced and that their livelihood is threatened.

But this progress by dedicated Chinese activists does not excuse the accusations against or the alleged deceit by Marc Ching, which deserve a full and fair investigation.