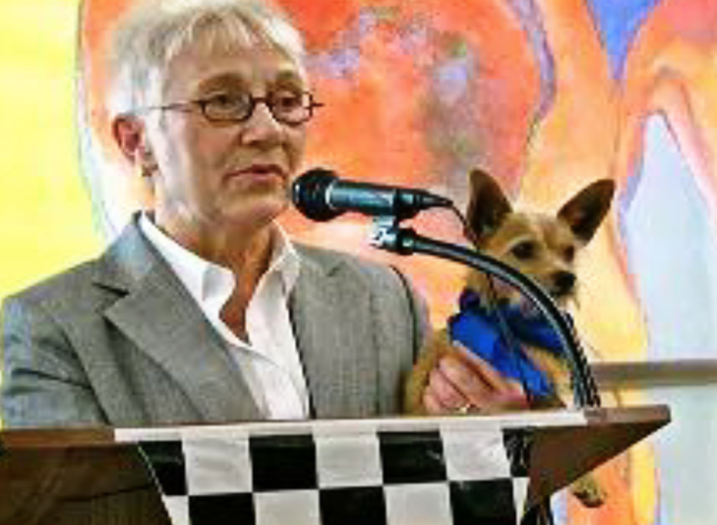 Oddly, mixed in with humorous anecdotes about dogs, cats and other pets are numerous anti-President Donald Trump posts.

As of May 12, at 9:55 a.m., one of these sites also shows nude photos of former-model and now-First Lady Melania Trump with disparaging captions, apparently posted by Brenda Barnette.

While Barnette has every right to her political preferences and positions and to post anything she wishes to share on her private FB page, is it acceptable to the taxpayers, the Mayor and the City Council that the head of any LA City department is posting on an internet site, during normal business hours for the City of LA, material deriding any elected official or candidate, and/or nude photos of any woman (or man)?

At the peak of the #MeToo movement, Mayor Eric Garcetti assured the public that any type of sexual or gender harassment by a City employee is absolutely prohibited. Can we assume exposing the public and/or employees to nude photos on a City-related site would fit into that category?

Persons in the public service shall not only be ever conscious that public service is a public trust and also shall be impartial and devoted to the best interests of the City, and shall so act and conduct themselves, both inside and outside the City's service as not to give occasion for distrust of their impartiality or of their devotion to the city's best interests.

MyVoiceLA Policy - City of Los Angeles employees . . .must perform their duties in a manner that earns and maintains the trust and respect of their supervisors, other employees, and the public.

What you cannot do:  Engage in political activity in the following scenarios: — While on duty for the City. — Using City equipment. — In any manner that implies you are speaking on behalf of the City or communicating a City position. This may include...using a City title or position.

It is not unusual for anyone in the modeling or film industry to have been photographed in various stages of undress—especially when beginning a career. This photo of Melania Trump is rather modest in that, although her breasts are exposed, one hand is placed on her lower abdomen to cover her pubic area.

GM Barnette should assure this is true, because the publication of untrue information makes the person re-posting it equally liable for a false accusation.

(It is likely these posts will be quickly removed; however, several concerned sources made screen captures that will be provided to the Mayor, Councilman Paul Koretz and City Attorney Mike Feuer.)

(LAAS GM Ed Boks was chastised by the Council and in the media by both City officials and animal-welfare groups in 2006 for approving a fundraiser for L.A. City shelters at a Hooters restaurant.  Members of the Council cited Hooters' alleged "exploitation of women." The servers were wearing low-cut T-shirts and shorts. This reportedly played a major role in his resignation.).

When this question was posed on Quora.com, photographer and history buff Joe Pepersack answered on  February 1, 2019, "Melania Trump posed nude many times in her modeling career, including at least one soft-core girl-girl shoot. The photos are well documented and were published in the New York Post.  He suggests a 30-seconds search on Google to see them all.

He adds, "If she had made a hard core sex tape it would be front page news and also be readily searchable on the internet. No such tape has surfaced as of yet."

Another responder on the same date, Bob Trammell  wrote, "She did pose semi-nude while a model. However, there is no truth whatsoever to the remainder if your disparaging allegation." He also affirmed, "There are many nude photos of her on the Internet, but many are fake."

On Feb.20, in "GM Brenda Barnette Sends ‘Adults-only’ Events Invite to Los Angeles Animal Services Staff via City Email, we discussed Barnette forwarding to ALL employees  (via official LAAS e-mail) an invitation from ‘J.J. Rawlinson,’ of the Annenberg Foundation  to attend "super cool" ADULTS-ONLY events, a Singles Mixer and a presentation on "The Mating Game--a cool talk on Animal Love, Courtship and mating in the animal world--with the annotation (I have to keep telling her to keep it PG!!),"  the announcement said.

Not all LAAS employees who received this thought it was appropriate--especially the married ones!

The invitation stated, "The event is LGBTQ inclusive and we are hoping to increase the number of single men who respond."

While working in San Francisco as a program-development director for the SPCA, Ms. Barnette also served as President of the Board for the Lesbian, Gay, Bisexual, Transgender Community Center Project, according to Friends of 1800.org.)

So, is Barnette interested in ALL women having the right to make decisions about themselves and their bodies—including posing nude?  Or, does nudity only concern Barnette when it is Melania Trump?

THE "BRANDING" OF BRENDA BARNETTE

GM Barnette has recently become a big fan of "branding," advising the L.A. Animal Services Commission that the anticipated LAAS website, for which they have just appropriated $1.5 million from the Animal Welfare Trust Fund (donations for animals), will require an entire year of "branding" of the Department before it can be launched.

So, since she already has an official page (www.laanmalservices.com) and, undoubtedly, has a personal page for close friends/relatives, the two Facebook locations: "Brenda Barnette" and the other, Brenda Barnette  / AngelCityPets, appear to be "public figure" pages.  These are purportedly created to develop her own "brand"—allowing visitors to become familiar with her so that her opinions and endorsements will be sought and her image ("brand") will stimulate confidence and persuade perspective donors to give more money during fundraising efforts.

While Brenda Barnette has every right to her personal political views, an embarrassment like this by a prominent City official making $315,000 a year (which includes compensation for sound judgment) is inexcusable. If she were a man, would the Mayor find this posting acceptable?

Regardless of political preference, most donors are skeptical of contributing to fundraising campaigns or supporting a cause represented by someone who has repeatedly shown poor judgment.  Mayor Garcetti and the City should be also!

(Phyllis M. Daugherty is a contributor to CityWatch and a former LA City employee. She is currently employed by the U.S. Postal Service.)