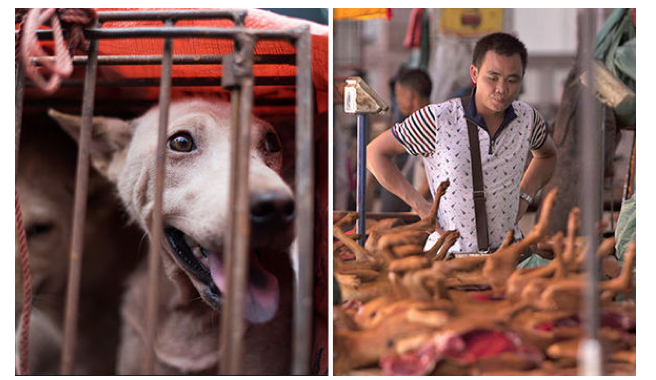 ANIMAL POLITICS-Two weeks ago, Shenzhen became the first city in China to ban the production and consumption of dog and cat meat. See: “Chinese City of Shenzhen Bans Eating Dog and Cat Meat.”

Now, in what could be an historic step forward for animal welfare, the Chinese Ministry of Agriculture has issued draft guidelines declaring that dogs are pets, not to be eaten.

The guidelines specifically provide that dogs are not to be considered livestock that can be bred to provide food, milk, or fur. The Agriculture Ministry stated: “As far as dogs are concerned, along with the progress of human civilization and the public concern and love for animal protection, dogs have been ‘specialized’ to become companion animals. . .Dogs are generally not regarded as livestock and poultry around the world, and China should also not manage them as livestock and poultry.”

The draft guidelines are open for public comment until May 8. There is opposition from those involved in the dog meat trade.

Ten to twenty million dogs are brutally tortured, killed, and eaten each year in China. The dogs are kept in cramped, rusty cages stacked on top of each other. Many of the dogs are stolen pets. They are slaughtered in brutal ways such as hanging, electrocution, beating with sticks, blowtorching, or being boiled alive, due to an erroneous belief that high adrenaline levels will produce tender meat and increase the supposed health benefits of consuming dog. Dogs are often tortured and killed in front of other dogs who are awaiting their deaths.

What Can We Do?

Send an email to the Chinese Ministry of Agriculture in Beijing:  [email protected]

And/or you can send an email to the Chinese Embassy in Washington:

Please tell them (or leave a message) that the Chinese Ministry of Agriculture is currently considering guidelines that will ban dog meat and that you support the guidelines to ban dog meat. Dogs are pets, not to be eaten.

What Else Can We Do?

There are other countries in which the dog meat trade flourishes, including Vietnam, South Korea, Indonesia, and Cambodia. Please see this article for how we can help end the dog (and cat) meat trade in those countries and for additional information on the dog meat trade: “Help Stop the Brutal Torture and Killing of Tens of Millions of Dogs in the Dog Meat Trade.”

We are making tremendous progress on this. Adoption of the Chinese Agriculture Ministry’s draft guidelines discussed above would be the most significant step yet and could lead to an end of this horrific practice world-wide. China, by far, is the country that consumes the most dog meat.

Presumably, final adoption of these guidelines would end the infamous annual Yulin Dog Meat Festival. Please contact the Chinese authorities set forth above and ask them to adopt the draft guidelines banning dog meat.

Thank you to everyone who has contributed to this effort. Stay well!