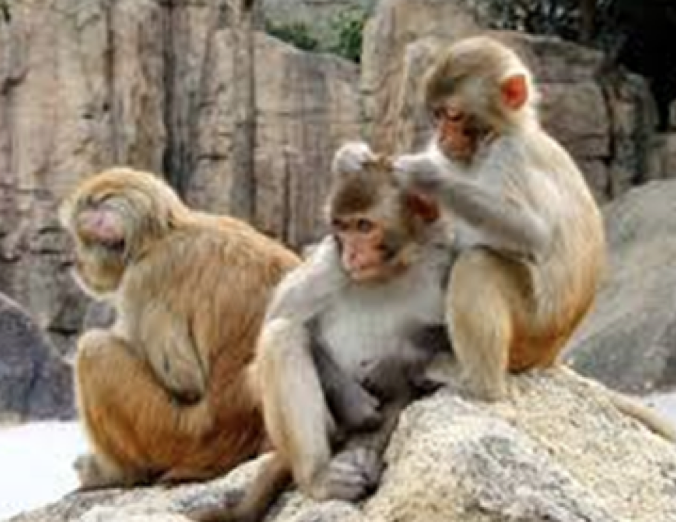 ANIMAL WATCH-Primate-center scientists have found that rhesus macaques, human-like monkeys, can be infected with SARS-CoV-2 -- the virus behind COVID-19 -- although they develop different symptoms -- so experiments are beginning at the University of California Davis, "to prevent outbreaks in their colonies,"  according to The Scientist.

These experiments are not about protecting the monkeys' natural habitat. Rather, UC Davis is home to the California National Primate Research Center, and the stated goal is "to protect the animals from the SARS-CoV-2 infection; as researchers plan nonhuman primate experiments to aid in the development of coronavirus treatments and vaccines."

The California National Primate Research Center told The Scientist that the facility has a population of 4,000 rhesus macaques and 100 titi monkeys, and "Like humans, monkeys are vulnerable to the virus behind the COVID-19 pandemic." Thus, keeping the virus out of primate colonies across the country will be essential for SARS-CoV-2 research," officials say.

Skip Bohm of Tulane stated that the Center will first begin the COVID-19 experiments on nonhuman primates to confirm whether the monkeys can be infected with SARS-CoV-2. “If you want to test treatments and vaccines, you have to be sure the animals can be infected,” Bohm says.

However, investigators in China have shown that rhesus macaques can be infected with SARS-CoV2, the report states.

In psychological research, rhesus macaques have demonstrated a variety of complex cognitive abilities, including the ability to make same-different judgments, understand simple rules, and monitor their own mental states. They have even been shown to demonstrate self-agency, an important type of self-awareness.

In 2014, onlookers at a train station in Kanpur, India, documented a rhesus monkey, knocked unconscious by overhead power lines. It was then revived by another rhesus that systematically administered a series of resuscitative actions.

In several past experiments during a peer-reviewed study in which mirrors were given to rhesus monkeys, they looked into the mirrors and groomed themselves, as well as flexed various muscle groups. This behavior indicates that they recognized and were aware of themselves.

Due to its relatively easy upkeep in captivity, wide availability, and closeness to humans anatomically and physiologically, it has been used extensively in medical and biological research. The rhesus macaque was also used in the well-known experiments on maternal deprivation and isolation carried out in the 1950s by controversial comparative psychologist Harry Harlow, in which the reactions to isolation and lack of physical contact with a living being were tragic.

SHOULD ANIMALS BE USED FOR SCIENTIFIC OR COMMERCIAL TESTING?

PETA (People for the Ethical Treatment of Animals) states:

"Diseases that are artificially induced in animals in a laboratory, whether they be mice or monkeys, are never identical to those that occur naturally in human beings. And because animal species differ from one another biologically in many significant ways, it becomes even more unlikely that animal experiments will yield results that will be correctly interpreted and applied to the human condition in a meaningful way."

For example, according to former National Cancer Institute Director Dr. Richard Klausner, “We have cured mice of cancer for decades, and it simply didn’t work in humans."

An estimated 26 million animals are used every year in the United States for scientific and commercial testing, and research on living animals has been practiced since at least 500 BC, according to ProCon.org.

Proponents opine that "there is no alternative method for researching a complete living organism, and that strict regulations prevent the mistreatment of animals in laboratories."

However, opponents of using live animals in testing claim the animals are tortured and often die gruesome deaths and that it is cruel, inhumane, and unnecessary to experiment on helpless living beings. Also, because of the anatomical differences in animals and humans, few of the tests performed provide accurate and safe results.

On March 20, The National Anti-Vivisection Association (NAVS) announced that an article entitled, "These impossibly tiny organs could finally end animal testing,” appeared in Popular Mechanics on  March 9, 2020, and discussed, "A newly developed system of inter-connected mini organs appears to have done a better job of identifying harmful drug toxicity than previously-used animal models."

Researchers at the Wake Forest Institute for Regenerative Medicine (WFIRM) have developed what has been touted “the world’s most sophisticated laboratory model of the human body,” by developing a full system of organoids, complex three-dimensional in vitro models that mimic the structure and function of real tissues and organs.

Many different organoid models are already available, including models of the liver, kidney, brain, breast and gastrointestinal tract, but many had viewed organoids as simply complements to animal testing—until now.

When used to examine the effect of drugs known to cause liver or heart failure and later recalled by the FDA, "this 3D organoid system was able to demonstrate toxicity that was missed by pre-clinical tests, including those on animals."

"Had this human-relevant alternative been available and used in place of the animals, the danger the drugs subsequently presented to humans could potentially have been avoided," NAVS states.

ANIMAL EXPERIMENTATION - is there a better way?

Some medical and scientific experts say SARS-CoV-2 could mutate and reoccur. Or, if enough people  develop immunity — either through infection or vaccination — it will stop transmitting and be eliminated, or the virus will continue to circulate and establish itself as a common respiratory virus, according to Live Science.

How much can we learn from inducing similar -- but different -- conditions in animals for the purpose of creating pathology and pain for experimentation, and which often require euthanasia of the animal?

Shouldn't we spend that time and money developing modern, high-tech analytics and simulations of how diseases actually affect  human chemistry and immune systems, and--more importantly in this current epidemic--extensive examination and evaluation of all factors affecting humans who have, or have not, survived COVID-19?