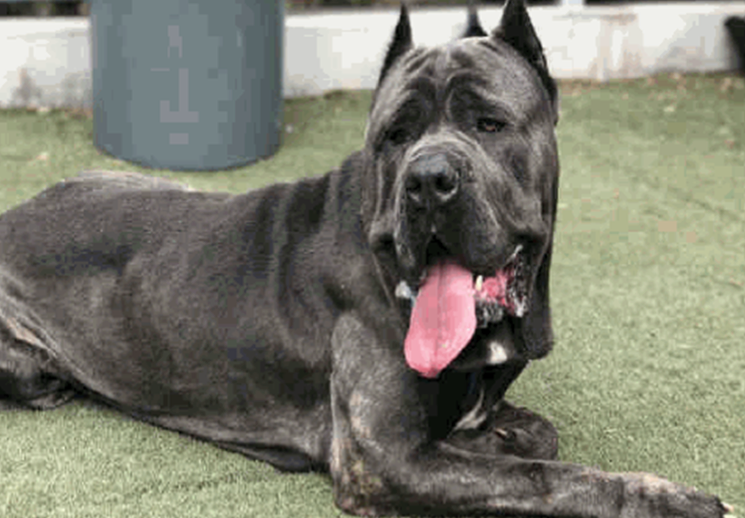 ANIMAL WATCH-Los Angeles General Manager Brenda Barnette complains at most Commission meetings that she is understaffed in the shelters.

The following incident and many more attacks before by dogs that are obviously aggressive and dangerous might be a large part of the reason.

A 120-pound Cane Corso (pictured above) was surrendered by his owner at the Los Angeles Animal Services shelter in South LA on December 10, 2019 because he was "aggressive with people." His first note by shelter staff that day is, "Medical was unable to handle the dog during intake. The surrendering owner was instructed to place the dog in a kennel to prevent the dog from reacting negatively to staff." (A safe translation of that last comment would probably be, "We were trying to not get attacked.")

He was logged in as a 2-year old Blue Brindle N "Mixed Breed," with the comment, "CAUTION."

The Animal Control Technician (ACT) who processed the dog wrote, "Was on high alert when ACT A. was getting a picture of the dog. Giving her uncomfortable stare as she stood near him. Owner was holding the dog's leash. . . Owner stated that the dog was becoming progressively aggressive. He informed us that "at times he is unable to go to the yard to approach this dog and the female that it is housed with due to the negative behavior this dog displays."

The dog was made "Available for adoption on 12/14/19 to the public." At some point it appears his name was changed to "Bino."

12/10 - MEDICAL NOTES: Owner Surrender. Dog is acting aggressively and unable to handle at this time. Will place in kennel and evaluate in a few days to see if behavior has improved. Evaluated while in kennel. Dog has a stiff stance, barking and growling. Nervous tail wag. Will recheck in 3 days.

12/14 - Condition: UNDERWEIGHT - WT. 120 LBS. Was able to do exam today. Was taken out for reassessment to play yard and did great. Able to handle with no issues.

"A male is interested in the dog. Dog is growling at him, pupils dilated, ears flat, body stiff and feet firmly planted, tail nub high and rapidly flickering, very vocal, comes to the front of the kennel, displaying behaviors associated with a very dominant and negative demeanor."

The dog's further aggression is described, along with him being fearful and ACT's efforts to calm him. Comment ends, "I will try to continue to work with him. Be very cautious of this dog."

On 12/26/19, Bino is placed on a list of dogs that management would like to get adopted or "rescued." It explains, "The following list are dogs that may be close to euthanasia. They have behavior issues and need your wide range of experience to help with these issues. . .As always please be cautious, as most of these dogs have issues that may lead to biting. If you have any concerns about dealing with any of these dogs, please let us know. . ."  The note for Bino reads: "Be Very cautious, surrendered for displaying negative behaviors with previous owner. Seems dominant and will need an experienced handler."

HE IS STILL ALLOWED TO BE ADOPTED

ACT S. and B. are OK with processing this dog through medical for adoption, but they are uncomfortable taking him to the yard to visit the family due to his behavior. The family is OK with adopting this dog without visiting him in the yard and are aware of his issues. They will be signing a behavior disclosure, the form will be uploaded to the picture area in this dog's file in Chameleon.

1/29/20 Note: Volunteer D. had this dog on leash showcasing to networkers. They were standing on the ramp leading to the medical room. I've met this dog before. As I passed by and said "hello" to the dog, he lunged up and grazed my wrist with his tooth. No puncture. Responded to D. shouting "no" and using the shaker can.

"The owner is returning the dog because he quickly became attached to the owner's partner and became protective. The dog nipped at the owner. When the dog is with the partner he will snap at anyone who moves near or even points at the partner."

Later, on 12/31/19: "This dog had behavior issues at Chesterfield Square, was adopted after the person had been told of the behavior issues. . .was returned on the 31st for "nipping" at anyone getting near the new owner."

"When this dog was being placed into the holding cage, the owner could not get the dog in the cage and the dog challenged the ACT by standing square and growling. I was able to have the owner hold the leash, run the leash thru the side of the cage door, and sweep the dog into the cage by shutting the door."

"When taking the dog out, the dog was growling, biting at ACT A. This pet had to have an ACD used in order to move him safely. In the kennel this dog is growling and biting at the front of the cage."

BINO DRUGGED TO ‘CALM’ HIM

See: David Goldstein Investigation:  Drugged and Dangerous -- shelter dogs given drugs to "calm" them but this can deceive adopters and endanger employees.

On January 3, 2020 this Cane Corso was adopted to someone. (Was that why he was given drugs?) There are no notes, but an adoption was processed for no fee and marked "OS DONATION DOG" with his Animal ID on the form and the total price $0.00. "OS Donation" usually means the owner paid a surrender fee. Was the OS fee used to pay for an adoption? (Name of the "adopter" is redacted, and no notes are in the file.)

1/31/20 - Bino was added to Red List due to size/behavior and multiple negative notes from staff. A second note that day reads: "Good afternoon. . .as of today no rescue interest." This means the dog was still available for adoption to a "rescue," who would adopt him to the public.

2/4/20 - AC.B. WAS CLEANING THE KENNEL AND THE DOG CAME OUT OF THE CUBBY CHARGING AT HER AND LATCHED ONTO HER HAND AND ACT Y. HEARD THE COMMOTION AND RAN OVER TO THE KENNEL AND SPRAYED THE DOG WITH THE NOZZLE AND GOT HIM OFF OF HER AND BACK IN THE CUBBY.  WE CALLED PARAMEDICS AND ADVISED DS AND CALLED ACT SUPERVISOR TO SEE IF WE CAN GET APPROVAL TO EUTH. (Pictures were taken.)

Kennel notes state the incident occurred while the ACT was "hosing kennel" and she was taken by paramedics to USC County Hospital.

2/4/20 - Supervisor is asking permission to euthanize the dog. He has already cleared it by two managers and still is writing another note: "This animal has gone through multiple levels of management scrutiny and all agree to the euthanasia. He finally got approval.

Here is a partial description of this breed:

The Cane Corso is a mastiff breed from Italy. He is a complex, powerful dog with special needs. For starters, he is a giant breed. He was created to hunt big game and guard property.

The Cane Corso is not an appropriate choice for an inexperienced dog owner. Early socialization is essential.

That said, no amount of socialization will make him friendly toward people other than his family. The Cane Corso is first and foremost a guard dog and he takes his responsibilities seriously. (Read complete description here.)

The ACT who was attacked is still not back at the shelter, and GM Brenda Barnette is still complaining at every meeting that she is terribly understaffed. Perhaps safety and caring for the welfare of her employees would help.