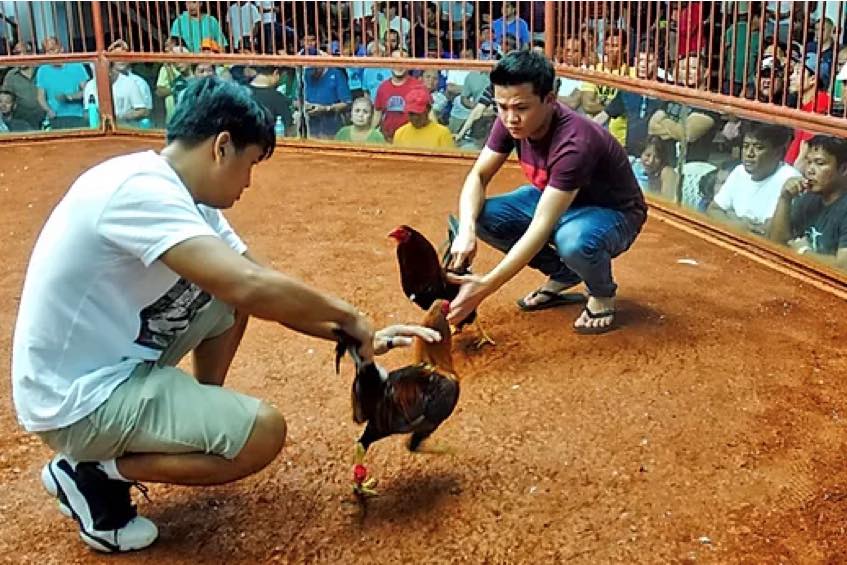 The 2,500-page analysis contains live-animal shipping records obtained from the territorial Department of Agriculture and reveals "the illegal trafficking of nearly 9,000 birds to Guam alone in 33-month period — translating into an illegal shipment, on average, every other day."

Equally alarming as this massive contribution to a brutal and barbaric "blood sport," is the fact that this was apparently in anticipation of the Federal Ban on Animal Cruelty, signed into law by President Trump.

The records reveal the illegal trafficking of nearly 9,000 birds to Guam alone in a 33-month period — translating into an illegal shipment, on average, every other day -- from five exporters in Oklahoma, North Carolina or California.

The cost for three male roosters was $1,500, according to Drew Edmondson, a former four-term Attorney General of Oklahoma and now the co-chairman of the Animal Wellness National Law Enforcement Council.

The group is calling on Guam Agriculture director Chelsa Muna-Brecht to review and revise the live-animal clearance process for the shipment of birds to Guam and to instruct her staff to deny certification for any additional shipments of game fowl destined for Guam, except in cases where the shippers and receivers can affirmatively demonstrate that they are not involved in cockfighting.

Under Section 26 of the Animal Welfare Act, 7 U.S.C. 2156, there are strict prohibitions on transporting animals across state or territorial lines, “regardless of whether cockfighting is legal at the export destination."

The law reads, “It shall be unlawful for any person to knowingly sell, buy, possess, train, transport, deliver, or receive any animal for purposes of having the animal participate in an animal fighting venture.”

As early as December 15, 2018, Guam's then-Governor-elect Lou Leon Guerrero, opposed the anticipated ban in the U.S. territory, and defended pitting roosters with blades taped to their feet in a life-or-death battle for the enjoyment of blood-thirsty spectators and gamblers. (Guerreo was sworn into office on January 7, 2019.)

"Cockfighting has historical significance on Guam and continues to be a regulated practice today," he told the Associated Press. "Despite our community's collective efforts in expressing clear opposition to such a ban at the highest levels of government, we were once again ignored."

While cockfighting is illegal in all 50 states, prior to the signing of the ban by President Donald Trump, territories could to set their own rules.

WHEN WAS THIS SIGNED INTO LAW?

President Donald Trump signed the $867 billion farm bill into law in December 2019, buried within that massive bill is a provision extending the longstanding federal ban on cock and dog fighting to Guam, the CNMI, American Samoa, Puerto Rico and the U.S. Virgin Islands.

A GLIMPSE INTO GUAM'S COCKFIGHTING WORLD

Lest we underestimate the financial impact of the ban, betting is an important part of this "cultural tradition." On December 21, 2019, Guam Pacific Daily News provides a glimpse into the financial aspect of cockfighting in Guam today with this vignette:

Vicente Ogo, who has been raising and fighting roosters since he was a child, sold all of his birds during the past year because of a new federal cockfighting ban for the U.S. territories. It takes effect Dec. 20. 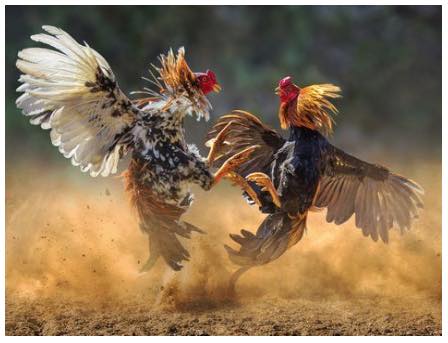 Ogo, 38, of Maina, said some local cockfighters have been skeptical about the ban and its impact on the sport, but he takes it seriously and doesn't want to jeopardize his federal job, working on a military base.

On Saturday evening [he] competed in one of the last legal cockfights on island and in the nation, at the Dededo Game Club. He “sponsored” a friend’s roosters in the three-cock derby format, paying half of the total $2,500 competitor fee. That’s an entry fee of $1,000 per contestant and a mandatory minimum bet of $500 per fight.

With nearly 60 competitors at the event, the main prize was more than $50,000, awarded to the contestant or contestants with the most wins. Bet callers, who work for tips, used hand signals to take side bets from spectators before each fight.

“It’s pretty sad,” Ogo said of the federal ban. “I love breeding chickens and fighting them. I grew up with it.” He said the sport is misinterpreted and he doesn't believe it is cruel.

MONEY - ANOTHER REASON WHY TERRITORIES ARE FIGHTING THE BAN

A Jan. 29, 2019, article, How a cockfighting ban could affect Puerto Rico’s struggling economy provides a glimpse into the overall financial impact of cockfighting in one of the U.S' struggling territories.

"It can be difficult to calculate exactly how much cockfighting contributes to the economy. While license fees, sales taxes on concessions and municipal property taxes associated with cockfights are tracked by the government, much of the money generated from the fights are part of the island’s informal economy.

Cash bets made on the roosters (or any cash transactions made in venues) are not tracked," she said.

In a January 8, article, "Will cockfighting birds from US spread vND into Guam?" Roy Graber, senior reporter at WATT Global Media, looks at another danger of transporting fighting cocks from California.

"For more than a year and a half, we have received notifications from the U.S. Department of Agriculture (USDA) Animal and Plant Health Inspection Service  (APHIS) regarding new cases of virulent Newcastle disease (vND)," he writes.

APHIS calls cockfighting birds, “backyard exhibition chickens,” he discovered; and that prompted him to take a closer look at the Animal Welfare Action report and the potential health hazards from transporting fighting cocks to Guam.

Graber opines, " If these exhibitions have caused the spread of a virulent disease in California that has even hit several commercial egg facilities, there is a possibility that vND-positive birds or eggs can also be shipped to Guam and spread the disease there.

"There may be no meaningful poultry production in Guam, but with potential threats from migratory birds, the acceptance of fighting bird imports in Guam seems like a risk that shouldn’t be taken," he concludes.

This is a serious issue with many ramifications. No one has more experience with combating illegal animal fighting than Wayne Pacelle, but this will take a very large village and cooperation between governments.

Anyone involved in animal welfare or just concerned about the spread of this devastating disease may want to follow Animal Welfare Action (AWA) on this issue. This is a danger we shouldn't ignore.