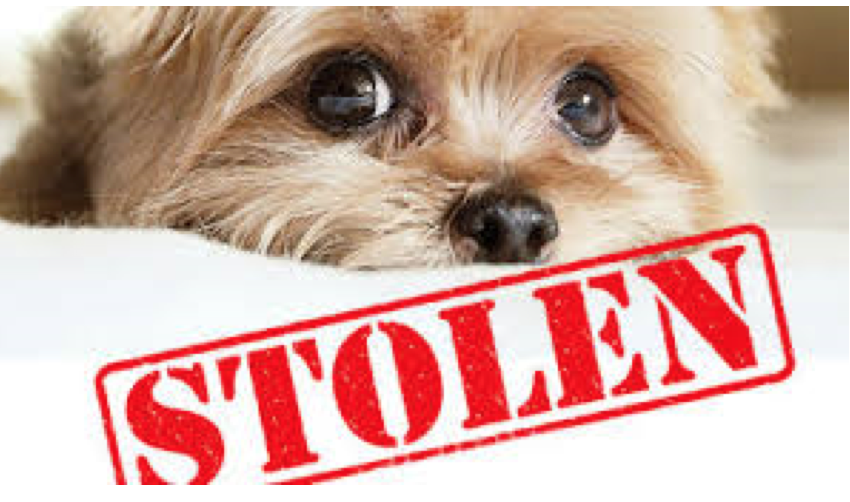 ANIMAL WATCH--Criminals may not approach you in a busy, surveillance-monitored parking lot, but no matter where you live, while you are out shopping or having your pet groomed, a thief could be watching you come home because of a common thing most of us do.

You may be enabling someone to steal your pet, your ID or determine where you live merely from certain items you leave in your car. Scary?  It should be!

Pet theft began this investigation but is not necessarily an isolated crime, so it is important not to enable knowledge or observance of your family's daily activities by any stranger.

PET THEFT - A WARNING BASED ON ACTUAL CRIMES

Two Yorkshire Terriers and a Poodle were stolen within a few weeks from different homes in the South Bay area of Los Angeles County. In each case, the dog was in its own yard and the owner was either present or (in one instance) had briefly left home. In the incident where the owner was not there, the home was in a fairly isolated, affluent area and the dog was unattended for only about 45 minutes behind a high wall. The gate was left latched but unlocked for that period. When the owners returned the gate was still latched but the dog had been removed.

In all of the above, the dogs had recently been taken to a public place where the owner parked in a lot and could be seen taking their dog in or out of a pet-related service or business location.

Another similarity was that in each case two men were in a white unmarked van, wearing work coveralls, were seen in the area, but their clothing provided immediate assumption that they were utility workers or other public employees whose presence was not alarming. In the latter incident, one of the family members remembered as they drove away, that there was a white van with two workmen in it parked near the bottom of the hill, but nothing aroused their suspicions.

The proximity in locations and the commonality of the "white van with workmen" enticed a local TV station to air the story and alert local pet owners to report suspicions to the police department and/or their local animal control agency.

A SENIOR CITIZEN CRACKED THE CASE

An alert woman in Torrance, who regularly took her two small dogs for off-leash exercise at a public park early in the morning, solved the mystery, after seeing the broadcast.

She noticed a white van parked in the lot when she arrived at the park.  A man behind the wheel appeared to be writing when she arrived. However, the second man standing at the side of the truck with his back turned made her uneasy.

She tried to concentrate on her unleashed dogs (which she had already released) but her discomfort caused her to suddenly turn around and see the man in the coveralls now standing by her car, looking in the window and writing on a small pad. She instinctively yelled and started back toward him. He tripped slightly while trying to get away and dropped the pad.  On it was her name and home address.

She looked in her car and realized recently received mail was in the seat--with her address prominently displayed.

After that, there were no more reports of similar pet thefts in the area.

Especially around the holidays, pet theft can be lucrative because many people think of getting a puppy as a pet for a child.  Whether or not this is a desirable practice is debatable.  But, selling animals--often described as purebred--on Craigslist and other on-line outlets is simple and essentially risk free.

If a stolen pet is not microchipped, there is little chance of the owner seeing it again, and even less chance of official action being taken, because few laws govern internet commerce or pet theft.

Any purebred dogs can also be used for breeding and selling the pups can become a perpetual income stream. Some sources say puppy mills will also purchase unchipped purebred dogs to add to their breeding stock.

Pit Bulls are frequently stolen, especially puppies, and may be used for illegal animal fighting.  (These dogs should be kept inside or under constant vigilance of an adult for safety.)

OPPORTUNITY CAN DETERMINE OUTCOME OF CRIMES

A crime-in-progress may change according to opportunity, so it is impossible to gauge the original intent. An attempted or successful pet theft may also reveal other items which can be taken and/or a resident may be injured or killed trying to stop the crime.

A veteran LAPD detective said the issue of leaving mail or any other documents with a home address and name can apply to far more than pet thefts.  It can easily lead to home invasions, burglaries or robbery because the victim is unaware that they and/or their entire family are being targeted and their habits observed.

Criminals frequent locations where they can identify the maximum benefit from their effort with the least risk factor in committing a crime, and the minimal potential for detection.

They realize that most people are absorbed in their own thoughts and time schedules and are basically unaware of their surroundings. AND, most of us leave items visibly in our car which identify us and our address.

INTERNET CAN PROVIDE A TOUR OF YOUR HOME

Once a thief or perpetrator of any crime has your home address, a search on the Internet can show whether your house has been offered for sale or purchased recently and the final price (indicating your net worth) and often provide a virtual tour of the interior and exterior -- providing valuable details of where expensive items could be located.

It can also notify of the presence/location of security cameras inside and outside. It can show the ease-of-entry doors/windows and location of the various rooms, including the master bedroom and den/office. Thus, someone planning a burglary or home invasion already has a road map.

Once the identity of a targeted victim has been determined by name and address, there are also other ways of obtaining information that can enable a crime to be committed. The targeted individual may be "friended" on Facebook, where the number, gender and ages of the family members are provided and future vacations, sports events or weekends away from home are announced.  The person also may still have personal/family information remaining on "My Space" and similar discontinued sites.

Certain documents can give a car thief or burglar everything he/she needs to steal your identity.  Here's what experts say you should NOT  keep in your glove compartment or anywhere in your car:

--Personal papers, including credit card bills. Don't leave anything with personal/identifying information. The National Insurance Crime Bureau says, "It’s just too easy for thieves to take your ID and use it to make phony credit cards, loan applications."

--Vehicle registration - You do NOT have to show the original.  Law-enforcement officers will accept the copy you keep in your wallet.

--Vehicle title -- Should not be in your car.  Among other harmful activities, it can be used to create fraudulent titles to help sell stolen cars.

--Checkbook and/or wallet.  This should be self-explanatory.

DO KEEP IN YOUR CAR---Proof of current auto insurance (although legally this can also be kept in your wallet if it is also carried by all drivers of the vehicle.)

DO KEEP IN YOUR CAR (and in your wallet/purse) --CONTACT INFORMATION (NAME AND PHONE ONLY) FOR A RELATIVE IN CASE OF AN EMERGENCY and a list of any allergies or medical instructions.

See other very useful and important information at CarInsuranceQuotes.com:

The criminal mind has thus far eluded explanation. A crime of intent can change drastically during commission by someone who thrives on arousal, reward and anxiety.

Do not make your pet, your family, yourself or your home a target for theft and possibly more dangerous and harmful acts, including physical assault, rape or murder.

Don't underestimate the dangers or the fact that a criminal may be under the influence of a substance which distorts focus and judgment.

DON'T BE AN INTENDED TARGET OR AN OPPORTUNITY

Be cautious of who is near your vehicle. With the large homelessness populations in many cities, we have become accustomed to people leaning on light poles or living in tents on sidewalks. Not all are dangerous--but some are--and others have connections who will pay them for information.

Remove all electronic devices from your car before exiting the vehicle (not only are they expensive, but they also contain personal and confidential data) -- even for a short period or when parked in your driveway.

Keep all your mail or papers with personal information in a safe, concealed location and shred them when discarding. Don't keep even advertisements addressed to "occupant" at your address in your car. It is just as dangerous as handing a thief the keys to your home!

Phyllis M. Daugherty is a former City of Los Angeles employee and a contributor to CityWatch.)