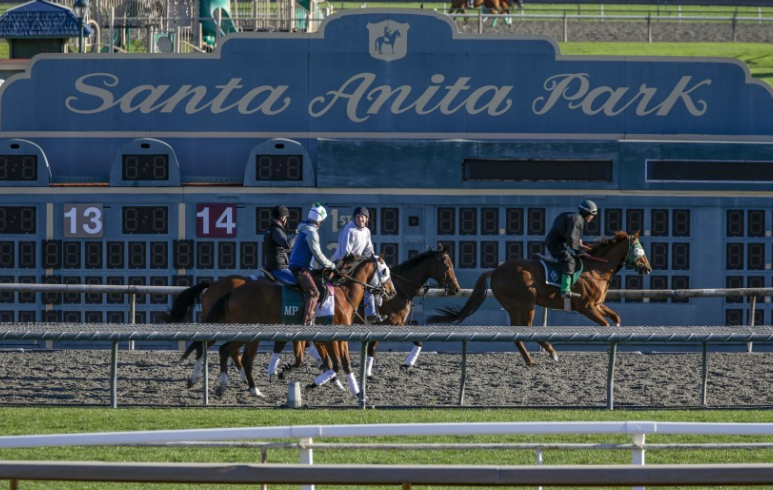 ANIMAL WATCH-Emtech, a 3-year-old colt, was euthanized on the track at Santa Anita on September 28 after a tragic injury that broke both of his front legs, and just as prime-time TV ads announced the 2019 Breeders' Cup World Championships at Santa Anita in November.

"Workers hurried to put up a green screen to shield the foundering colt from the crowd, its front legs unable to withstand the animal’s weight," the Washington Post reported.

Unfortunately, a screen and peaceful end of life with a veterinarian present is a blessing compared to the horse slaughter which is the last transport for an estimated one-half of American racehorses who can no longer run or win.

Santa Anita Park Averages 50 Horse Deaths A Year. This Year Is Nothing New. "It's nothing unusual," says Patrick Battuello, an animal rights activist who runs the website Horse Racing Wrongs.  "This is business as usual, these horses dying."

PETA SPEAKS OUT FOR THE ANIMALS

The carnage continues with the gruesome breakdown of Emtech, who was injured last year and had a claim voided at Santa Anita as a result. The total is now 32 dead horses on one track since late December 2018 -- and still, we’ve received no results from the Los Angeles district attorney on the first 30.

DA Lacey needs to release the findings on the culpability of trainers and veterinarians who may have used drugs, knee joint injections, and other dangerous methods to keep injured horses racing. Tragically, we have no answers, no mandate for the use of CT scan technology to detect the preexisting injuries that cause broken ankles, no switch to safer synthetic tracks -- which PETA has requested -- and no end in sight to the deaths.

The horses may not get a funeral, but racing is certainly digging its own grave.

WILL GOVERNOR JOIN IN?

Governor Gavin Newsom, responded to the news of Zeke’s death by warning, that horse racing may not have a future in his state.

But, it is hard to separate momentary outrage from political grandstanding as California racing enthusiasts prepare for the pomp, pageantry and revenue from the 2019 Breeders' Cup with purses and awards totaling more than $30 million and televised live by NBC.

IS THE SPORT OBSOLETE?

“Eliminating medication and drugs — it’s an easy fix. We got to change the public’s perception and clean this thing up if we are going to survive.”

This exclusive interview with a breeder whose stallion, War Front, commands $250,000 per mating provides insight into the financial relevance of horseracing in a declining facet of the American economy.

Kathy Guillermo, of PETA, told The Times, "The public has become intolerant of broken bones, whipping, drugging and death. But she opined about the horse industry, “. . .we should be on the same side, really.”

In “Goodbye to the glory days of California horseracing,” Daniel Ross, wrote in 2013 about the opening of the Breeders' Cup that year:

On the surface at least, the Saturday of opening weekend at Santa Anita racetrack in Los Angeles was a success. More than 12,000 race goers filed through the gates. . .a marked increase upon Friday's opening day attendance of 4,537.

But for anyone whose grey-matter recalls opening day attendances at Santa Anita of 60,000 – they would have recognized it as another grey day for a sport enduring an altogether bleak winter of discontent.

TRANSPARENCY NEEDED FOR A WARY PUBLIC

"Transparency" with regard to the end of life for racehorses may not be the best choice of terms for the horseracing industry.

In the U.S. in 2018, 493 Thoroughbred racehorses died, according to the Jockey Club's Equine Injury Database, which is almost 10 per week. Most of the deaths resulted from limb injuries, followed by respiratory, digestive, and multiorgan system disorders.

That rate is reportedly two and a half to five times higher than rates in Europe and Asia, where there are more stringent rules against performance-enhancing drugs. Earlier this month, The New York Times revealed that the 2018 Triple Crown champion, Justify, had failed a drug test before the Kentucky Derby, but that those regulators secretly decided not to pursue any punishment.

There has been some progress. That is down from the 2010 Forbes report that 730 died each year, an average of two fatal injuries per day.

WHAT HAPPENS TO LOSERS AND AGING RACEHORSES?

Why are Good Young Race Horses Ending Up as Meat 7,000 Miles Away?

The following is an excerpt from an important article by DeadSpin but may be difficult for sensitive readers. The link is provided, and it is highly recommended reading in its entirety:

Two years in the life and death of a racehorse:  April 17, 2017, a sunny morning in Ocala, Florida, marked the start of the largest sale of two-year-old thoroughbreds in the country.

At Ocala’s first of four full-day auction sessions, Ace King sold for $170,000 to K.O.I.D., a South Korea–based company that had become a familiar presence at Ocala and other big U.S. sales,

Finally, in a race on January 27, 2019, he staggered to the finish line last of 12. Two other graduates from his auction finished eighth and ninth.

The next day, he was diagnosed with a fracture in his right leg, according to KRA records, and two days after that he was retired. Within two weeks he was ferried south to the island of Jeju, a mountainous resort destination for millions of Koreans and Chinese, and the epicenter of South Korea’s livestock and horse-breeding industries. There would be no return from the island. Read  more)

An article by Forbes, discusses the fate of race horses sent to slaughter, "These doomed thoroughbreds are racing's collateral damage -- and that's before you include the 750 who die on the track each year, an average of two fatal injuries per day according to the Jockey Club's new equine injury database.”

As sad as it is to see the continuing deaths of these young horses, often medicated and pushed beyond their limits to win, their fate pales in number and suffering to those of the more than 10,000 U.S. Thoroughbreds a year that are shipped to slaughterhouses in Canada and Mexico, South Korea's Horse-Slaughter Industry.

The South Korean horse-racing industry sends thousands of horses to slaughter when they're no longer wanted for racing or breeding. (Warning: Graphic Video)

After a police investigation, prompted by video footage released by PETA showing widespread abuse and slaughter of horses in South Korea, three people at the Nonghyup slaughterhouse in Jeju have been charged, along with the company itself.

SHOULD HORSE RACING BE BANNED IN CALIFORNIA?

PETA must be commended for not demanding a ban on horseracing in California, which would shut the door to meaningful conversation with this industry instead of addressing the need to prosecute the cruelty.

Bans do not work because they are merely putting on a blindfold and polishing your halo and ignoring issues that need statewide -- and worldwide -- attention. Horseracing is a dying industry because attitudes are changing regarding humane treatment and exploitation of animals. That is what wins hearts as well as minds and brings about meaningful change.

Bans cause activities to go underground or move out of state. A "ban" would result in California losing its ability to effectively advocate and be a strong, relevant voice in demanding improvements -- including legislation and prosecutions -- in this industry. It would be an abandonment of the animals who need our help.

Racehorses live in an artificial world devoid of the basic needs for grazing, companionship, joyful exercise, familial affection and play. Even with the best food and grooming, they are herd animals confined to a lonely life of isolation.

They are also prey animals and the fear they experience when they are threatened or in pain and do not have freedom to move and escape is incalculable.

We must stay involved and expand our ability to demand protections for these animals. They should not be merely an owned commodity -- part of an investment portfolio -- and victims of  greed.

We must appeal to ALL who love animals, whether or not they also enjoy and/or are involved in horseracing. We must unite for their welfare. It is time!

(Phyllis M. Daugherty is a former City of Los Angeles employee and a contributor to CityWatch.) Photo: AP.  Edited for CityWatch by Linda Abrams.