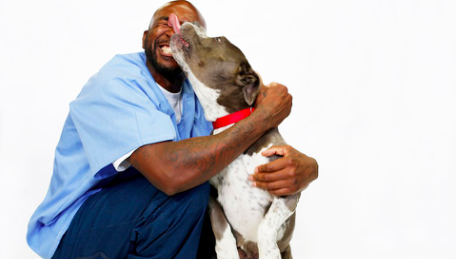 ANIMAL WATCH-The "first ever" Prison Dog Training introduced by LA Animal Services GM Brenda Barnette and AGM MeLissa Webber and approved by the LAAS Commission last December got off to an "insensitive" start when the media release sent out on July 29, featured a Black man with a Pit Bull.

The stereotype of the muscular man in prison garb with the dog licking his face in the release was called "offensive" by African Americans I interviewed. One said it is insulting that a City department would be engaging in "doggie racism." Another said his first reaction was that it was "placating" and insinuated that there is an inherent racial link between Black males and Pit Bulls. Another asked why inmates of other ethnicities were not included.

Also, dog-behavior experts advise that face-licking or "kisses" by dogs does not always mean affection. It can signal that the dog is uncomfortable and is seeking assurance or safety, or it can be a submissive gesture bestowed to acknowledge the dominant members of a pack and asking not to be harmed.

NOT THE FIRST TIME, GM BARNETTE IS ASKED ABOUT RACISM

After huge banners were hung on the South LA shelter in 2011 showing a Pit Bull with African-American and Latino Children, an OpposingViews.com article inquired, "L.A. Animal Services: Will Chopping Trees and Racial Stereotyping Increase Pet Adoptions?"

CBS reported, Controversy Erupts Over LA Animal Services' 'Racist' Campaign," [B]anners at the South Los Angeles Animal Shelter show African-American and Latino children playing with pit bulls in an effort to encourage dog adoptions. Banners at the West Los Angeles Animal Shelter, however, show children playing with other breeds known for being more docile and loving. Do you see something wrong with this picture?"

GM Brenda Barnette, response to CBS was, "there’s nothing racist or stereotypical about marketing dogs that are popular in the community served by the shelter."

After that she has added African American women to her administrative staff, including current Assistant General Manager Tammy Watson.

Paws for Life K9 Rescue and Los Angeles Animal Services (LAAS) announced today the launch of an innovative and first-of-its-kind program to help overlooked adoptable dogs find homes. The program will pair adopted dogs with inmates at the maximum security prison in Lancaster, CA. The incarcerated men will provide 6-8 weeks of daily dog training which is valued at more than $5,000. Dogs at the shelter will be evaluated for the program and those selected will come with an offer to the adopter to receive free training after adoption. 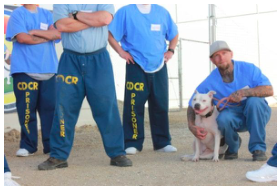 Several major questions arise immediately: "Who is going to train these "trainers" who will provide an outcome "valued at more than $5,000?" Or, are we to assume that prisoners automatically have special skills or experience that will ensure this benefit? Most professional trainers are very cautious about predicting "outcome" when training any dog -- especially one that has exhibited behavior that would cause it to be "overlooked" at a shelter, possibly for months. (Some overlooked dogs on the LA Animal Services adoption site have been there for over a year.)

But, Paws for Life K9 Rescue Founder Alex Tonner said, "What makes the partnership with LA Animal Services unique is that we are selecting great dogs who may have previously been overlooked to attend the training.

“Community members can adopt one of these pre-selected dogs knowing that after the 6-8 week training, they will be bringing home a fully trained friend into their home." (Emph. added.)

What assurances will LA City provide to the adopters who, according to this program description, will choose to adopt from a pre-selected list of "overlooked" dogs (code words for a dog that has shown poor behavior/aggression in the shelter or with potential adopters, or that has been adopted/fostered and returned to the shelter, often more than once)?

A recent response to my CA Public Records Act request provided the apparent initial list of dogs (June 28, 2019) which were personally evaluated and pre-selected by Paws for Life Rescue for adoption to the public, with the announcement, "ADOPT ME AND RECEIVE 6 WEEKS OBEDIENCE TRAINING AT THE LANCASTER PRISON FREE! SHELTER PAWS FOR LIFE." ([email protected])

Two of the dogs' names popped out immediately from our previous reports on Mugsy. He had a serious history of aggression toward animals and humans. Mugsy attacked the wife of his most-recent "foster" after five days, biting her on the head and hand, possibly causing serious damage. He was also reportedly very aggressive with children and other dogs. This was all noted in the shelter records available to Paws for Life.

Mugsy's shelter records show he was a stray who had been adopted twice and returned for aggression, before the latest incident.

Callejera was also selected by Paws for Life for its program. Mugsy and Callejera had fought in a play group at the shelter; both dogs sustained puncture wounds, according to shelter records.

According to the CA Secretary of State's site, Paws for Life K9 Rescue was first incorporated as Paws for Purpose on June 4, 2018, with an amendment changing the name on July 24, 2018 and a Statement of Information Filed on August 15, 2018. Thus, it has about a one-year history as an organization.

In researching "Our Team" as described on the organization's website, there is a glaring absence of any dog-training experience to indicate how the leadership determines the quality of the training it offers.

Alexandra Tonner (a.k.a. "Alex") refers to "incarcerated canine trainers" but does not say what background or training provided by Paws for Life, or any other source, imbues them with this expertise.

The Internet shows Alexandra Tonner was formerly Director of Operations at Karma Rescue, a non-profit 501(c)(3) organization that "creates second chances with our innovative programs that champion at-risk dogs in Los Angeles through educating, advocating, and providing resources for life-saving rescue efforts."

In its description, "About Paws for Life," the organization claims that, "After several months of training, our dogs are ready for family life after completing their AKC Canine Good Citizen (CGC) certification.”

Her bio also states, "Alex prides herself on the fact that so many men who have been through the Paws for Life prison program now have been released on account of their work with the shelter dogs."

A former correctional officer I contacted said this "might be slightly exaggerated since, in his experience, he did not know of any vocational or trade training or experience or program being the criteria for release from prison."

Also, I have been unable to locate any official "certification to train shelter dogs," unless this is an accreditation bestowed by the organization itself.

AND WHO TRAINS THE TRAINERS?

A review of the Paws for Life K9 website does not indicate in their bios that any of those shown as "Our Team" have a background or any involvement in "dog training."  She and three other women -- all shown with bully-type dogs -- are not listed as trainers or related to that field.

Jon Grobman, listed as the Director of Programs, states that "In 2005, I was sentenced to a total of 190 years-to-life for nonviolent theft crimes." But he concludes that he helped transform his own life by service to others and received a "Recall of Commitment from the California Department of Corrections and Rehabilitation (CDCR)." He states that he is "...on a mission to support meaningful programming for incarcerated individuals because I believe in their inherent worth and believe that they should have access to rehabilitative in-prison programs."

He is also shown on the Internet with Root & Rebound - Stand Together Foundation, which describes itself as a "re-entry legal resource center that advances second chance opportunities for some of the most marginalized individuals...impacted by the criminal justice system and mass incarceration."

PRISON DOG TRAINING COMES WITH RISKS -- WHO WILL ASSUME THEM?

California has many prison dog-training programs, which have been judged to have positive benefits for the dogs and the inmates. However, a reduction in recidivism has not yet been proven, according to reports available. There is also no indication of a large number of dog trainers who developed their skills and obtained their certification while incarcerated are running successful businesses or employed in this capacity.

The bigger question is what is the risk of promising that an "overlooked" dog will be ready for a home?

Who will retain ownership? The program assumes that an adopter will fall in love with a problematic dog, agree that it can be taken to a maximum-security prison for "training" by an inmate and after six weeks, they will have a well-behaved dog to be delivered by Paws for Life. During that time, who is responsible for the actions of the dog? Who can be held liable for any harm to the dog?

Who can predict the response of the dog when faced with the challenges in a home that has other pets -- cats, dogs, birds -- children, strangers, noise, activity and discipline? Will it react as it did in the solitary possession of a prisoner? The adopters of Mugsy found that he was already well "obedience" trained, but that had not resolved his issues of unpredictable aggression.

While basic obedience --  sit, down, stay, come-- are easily taught, will the City of Los Angeles and the Department of Animal Services be liable for any injuries, damages or deaths after the training of a dog that was promised to be made ready for a home? Or, is this risk being assumed by Paws for Life K9 Rescue?

One last note: Someone from the City of Los Angeles and LA Animal Services needs to take responsibility and make a meaningful public apology for General Manager Barnette's racial profiling in the media release on this program.