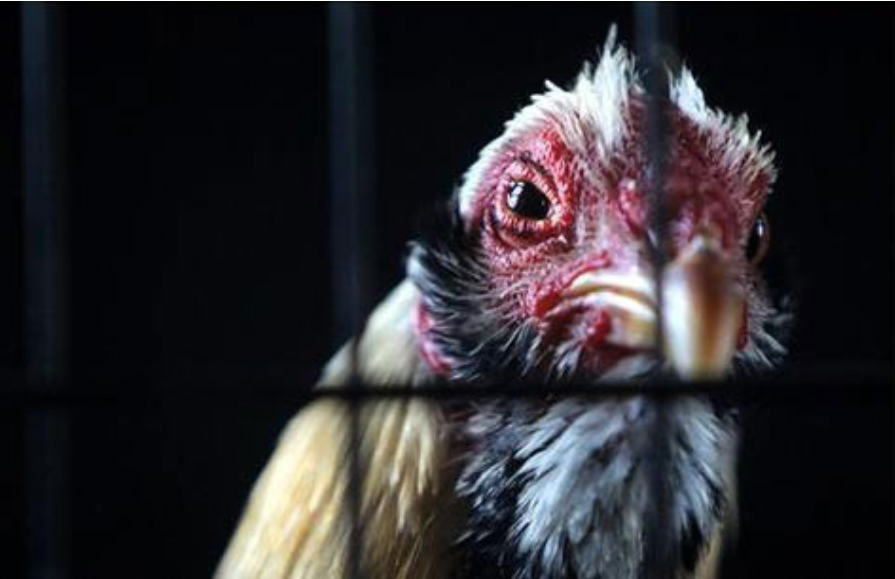 ANIMAL WATCH-The Board of Supervisors, on September 25, unanimously approved a plan developed by Los Angeles County Animal Care & Control Department to curb cockfighting by limiting the number of roosters allowed per property in LA's unincorporated areas.

Other less dramatic, but equally important, concerns about quality of life and public health and safety added to the urgency.

The new limits are also intended to reduce nuisance crowing in urban and rural areas and curtail a potential epidemic of Viral Newcastle Disease (vND) -- a fatal and highly contagious virus which has been recently identified in 150 birds in Los Angeles county for the first time since 2003.

Many of the cities within LA county already limit or prohibit owning/keeping roosters, and the city of Los Angeles has a basic one-rooster-per-property limit.

The Val Verde cockfighting bust in May 2017 in the northwestern region of Los Angeles County, near Santa Clarita, resulted in the seizure of over 7,000 fighting cocks and numerous fighting implements. Bloody bodies of roosters in trash bags, with deep slashes and gouged flesh depicted the violent manner of their deaths. Caged hens and chicks confirmed on-going breeding, assuring future generations of feathered warriors to perpetuate the lucrative gambling which underlies and perpetuates this unsavory and atavistic "blood sport."

Cockfighting is not a cultural or ethnic issue. It is animal cruelty in a disturbing, perverse, public display of brutality. Participation for generations does not make it acceptable or excusable. It is now illegal in all 50 states.

The possession of guns and sale of drugs are rampant at these events, which bring criminals who enjoy blood and death into unsuspecting communities, with innocent residents and families potentially becoming victims of other crimes.

Authorities reported 2,700 birds were seized during a raid on the same property in Val Verde in 2007.

Cockfighting has also been tied to human trafficking and sex slavery, with young boys without protective gear removing bird feces and handling carcasses of dead roosters. Law-enforcement officials near the border have reported young girls, appearing to be no more than 7 to 8 years old, brought in for the pleasure of cockfight attendees.

These and other, less dramatic but equally important, concerns about quality of life, safety, public health--and a looming potential epidemic of fatal Viral Newcastle's Disease (vND) -- prompted this necessary action by the Board of Supervisors, which was supported at the meeting by members of humane organizations across the county.

The ordinance will go into effect in 30 days. The Department of Animal Care and Control (DACC) will work with rooster owners to bring them into compliance with the ordinance’s requirements through education and outreach efforts.

However, complaints regarding noise, unsanitary conditions and animal abuse or neglect will continue to be immediately enforced.

Here are the rooster limits set forth in the adopted ordinance:

Rooster owners who wish to exceed the number of allowed roosters may apply for an animal facility license, which will cost $25 and require an annual property inspection. Provisions exist to accommodate the agricultural educational goals of 4-H and FFA club members.

No more than 25 roosters may be kept or maintained on any property, to accommodate poultry enthusiasts who raise chickens in rural areas for hobby purposes.

Rooster owners who wish to apply for an animal facility license may call the DACC Business Licensing Division at 562-345-0323.

COCKFIGHTS NOT THE ONLY CAUSE OF CROWING

Residents in urban communities shared with roosters are all too familiar not only with early morning crowing, but an entire life punctuated by cock-a-doodle-doos piercing the night and making sleep or concentration difficult, if not impossible.

"While crowing roosters may be nature’s alarm clock, urban roosters respond not only to the rising sun, but also to street or porch lights, neon signs, motion sensors and other unnatural luminosity. "Being who they are, roosters can always find something to crow about,” states a Daily News op-ed in 2008.

At that time, 31 cities in LA county had completely banned roosters or placed severe restrictions on owning them, including requiring health inspections and special permits, which could be revoked upon complaint.

Animal control agencies receive calls daily about crowing roosters keeping infants awake, negatively affecting neighbors’ well-being, and disturbing peaceful enjoyment of life. But they are often difficult to address because they are not provoked by the more-specific and predictable stimuli applied to barking-dog complaints.

Thus, unless there is a restriction on the number and/or locations where they can be maintained, rooster-crowing victims often have little local relief other than brief dreams of taking matters -- such as, the neck of the bird -- into their own hands.

With increased density of development and the high cost of real estate in Southern California, there is the additional factor of the deterioration or destruction of property values caused by rooster crowing or even invasive hen clucking.

In most areas where chickens are allowed, there are distance requirements; such as, crowing fowl being kept at least 100 feet from the nearest residence and 20 feet from the owner’s dwelling,

While the Los Angeles city’s distance standard for chickens (clucking females) is only 35 feet from neighboring dwellings, noise is not the only concern. There are serious health considerations.

The current trend to share human lives with pets is bringing the hope that future generations will treat all life with respect, but in some cases may also be encouraging health risks by not acknowledging fully the dangers that can occur from exposure to bacteria and viruses to which the human body does not have natural immunity.

For instance, keeping flocks of backyard chickens to produce organic eggs or to slaughter for food is becoming increasingly common in Los Angeles, but requires consideration of certain risks. (BTW, DAAC Director Marcia Mayeda reminded the public that roosters are not required in egg production.)

Two bacterial diseases, Salmonella and Campylobacter, are present in waste produced by fowl, and they can be transferred on clothing and shoes or become airborne. Both produce symptoms commonly referred to as food poisoning. Especially susceptible are children who walk barefoot where poultry is kept or who play with baby chicks.

The Centers for Disease Control and Prevention recommends that person not keep chickens if the household has children less than five years of age.

Contamination may be carried on the hands, clothing and/or shoes of children or adults into homes, schools and other locations and can originate from petting, carrying or touching a bird with the organisms on its feathers.

Education about food safety and avoiding hand-to-mouth contact while working with birds is essential.

Since May 18, USDA has confirmed 150 cases of Virulent Newcastle Disease (vND in California -- 97 in San Bernardino County, 21 in Riverside County, 31 in Los Angeles County and 1 in Ventura County.

From May 18 to July 26, 2018, the USDA confirmed 66 cases in backyard birds in California — 57 in San Bernardino County, 5 in Riverside County and 4 in Los Angeles County.

The disease is so virulent that many birds and poultry die without showing any clinical signs.

vND is not a food safety concern. No human cases of Newcastle disease have ever occurred from eating properly cooked poultry products. In very rare instances people working directly with sick birds can become infected with mild symptoms.

vND has not been found in commercial poultry in the U.S. since 2003, when a quarantine on pet fowl and commercial birds covered parts of nine counties and a 46,000-square-mile zone stretching from Santa Maria to San Diego.

About 3.1 million birds statewide were destroyed, according to the Santa Maria Times.  The LA Times reported that the lives of 30,000 laying hens ended in a wood chipper in San Diego.

The first outbreak of Exotic Newcastle Disease in the U.S. lasted from 1971 to 1974 and cost $56 million to eradicate. Agriculture Department officials believed farm workers who keep cockfighting roosters that became infected with Exotic Newcastle inadvertently spread the disease to egg farms.

The infection can be carried on people’s clothing and shoes. At that time, the federal government also spent $11.5 million from October to May to destroy 144,000 birds characterized as game fowl.

Watch for illness in birds. Talk to your avian veterinarian at the first appearance of any symptom.

If you get a new bird, make sure you know where it came from -- request documentation from the seller about where the bird originated. Keep the new bird away from your other birds for at least 30 days, to make sure it stays healthy. Have your veterinarian examine the new bird. Wash your hands after handling the new bird or its cage and equipment before handling your other birds.

SPCALA President Madeline Bernstein reminds bird owners that Viral Newcastle Disease is not limited to chickens but could even affect your parakeet.

The LA County Animal Care and Control report to the Board of Supervisors showed that during 2012 - June 2018, the Department impounded a total of 18,300 fowl, 4,570 of which came from the Second District -- mostly unincorporated Compton -- which is served by the Downey Animal Care Center.

This shows that not just Val Verde, but communities all over Los Angeles County are vulnerable to the extra burden of roosters and related activities which need to be addressed at the source. And, all who own/maintain birds -- commercially or as pets -- must be part of the solution.